KANO, Jan 2 2012 (IPS) - Africa’s top oil producer is on edge, poised to deter possible sectarian clashes between Muslims in the north and Christians in the south, while Christians are becoming more vulnerable to attacks from Islamist militants. 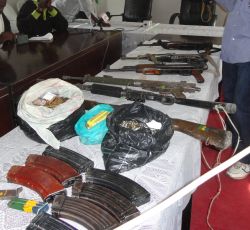 Boko Haram, Nigerian Islamists inspired by the Afghan Taliban, have claimed responsibility for a spate of suicide bombings and attacks on United Nations buildings, police targets and churches over the last year.

In its latest report on the casualty figures for Boko Haram attacks in Nigeria, dated Nov. 8, Human Rights Watch said 425 people have been killed. Though there are no newer statistics from the human rights group, the number was estimated to have reached over 500 deaths by the end of 2011.

The group claimed responsibility for bombings on Christmas that mainly targeted churches in the northern cities of Abuja, Jos and Damaturu, killing at least 40 people and injuring over 50, according to police reports.

“The recent Christmas bombings may spark off retaliation against Muslims,” Shehu Sani, president of the Civil Rights Congress of Nigeria, a human rights group, told IPS by phone.

“The Boko Haram wants to gain sympathy from the larger Muslim society claiming that they perpetrated the attacks in revenge for Christian attacks on Muslims in Jos during the Eid ul-Fitr (Muslim holy day) congregational prayers on Aug. 29, 2011, to further aggravate confrontations between Muslims in the north and Christians in the south,” Sani said.

Nigeria has almost equal numbers of Christians and Muslims, with the oil-rich south being predominantly Christian.

The recent Christmas holiday bombings sparked fears of reprisal attacks, and the government and religious bodies are intervening in an attempt to calm the tension.

“We are totally against what has been happening; we totally condemn it. Nobody can take anybody’s life, it is un-Islamic, it is un-Godly, all lives are sacred, must be respected and protected by all,” Sultan Abubakar Saad, Nigeria’s top Muslim spiritual leader, told reporters after meeting with President Goodluck Jonathan and National Security Adviser Andrew Azazi on Dec. 27.

In a separate meeting with Jonathan, Christian leaders warned that if the federal government did not take a more active role in providing security they would have to defend themselves.

“The consensus is that the Christian community nationwide would be left with no option than to respond appropriately if there are any further attacks on our members,” said the president of the Christian Association of Nigeria, Pastor Ayo Oritsejafor.

Two days after the Christmas bombings, a Christian was arrested attempting to bomb a church in the southern city of Yenagoa. A senior State Security Service (SSS) official told IPS “the bomb attempt has nothing to do with Boko Haram as it was confirmed that the attacker was a Christian from Edo State.”

On the same day an Islamic school with over 100 children was bombed in the predominantly Christian southern city of Delta. But it was too early to attribute the attacks to reprisal by the Christian community, the Civil Rights Congress said.

The international community condemned the Christmas bombings in Nigeria, and the government vowed to take a new approach towards quelling the Boko Haram insurgency.

“We are going to adopt a new strategy to fight Boko Haram, I am assuring Nigerians with total commitment,” Interior Minister Abba Moro told reporters at Madala village, a few kilometres outside of the capital Abuja, where a bomb killed 35 people at St. Theresa’s Catholic Church on Christmas day.

The government declared a state of emergency in some parts of four states troubled by bombings and suicide attacks: Borno, Yobe, Plateau and Niger. Just hours after the measure was announced, clashes erupted over land in the mainly Christian south between two rival ethnic groups, the Ezillo and Ezza, leaving 66 dead, including women and children.

The group Boko Haram, whose name means “western education is sin”, is fighting for the implementation of its strict interpretation of Sharia law in Africa’s most populous country. Founded in 2002, the self-proclaimed Muslim sect became internationally known in 2009, when a military crackdown on its members began in Maiduguri, the capital of the remote state of Borno near Nigeria’s borders with Chad, Cameroon and Niger.

Several members of Boko Haram were killed, including the group’s leader Mohammed Yusuf, who died in police custody. But they regrouped, and have launched continuous attacks and suicide bombings in northern Nigeria.

They claimed responsibility for the August 2011 car-bomb attack on U.N. headquarters in the capital that killed 26 people, and for the June 2011 suicide bombing at police headquarters, also in Abuja, that claimed eight lives.

The deadliest series of suicide bombings and attacks for which the Islamist group has claimed responsibility were carried out in the northern city of Damaturu on Nov. 4, leaving a death toll of more than 150, according to Sani of the Civil Rights Congress.

There is growing evidence for the much speculated links between Boko Haram and Al Qaeda.

Algeria’s deputy foreign minister Abdelkader Messahel told reporters that “We have no doubts that coordination exists between Boko Haram and Al Qaeda. The way both groups operate and intelligence reports show that there is cooperation.”

Algeria has the biggest intelligence-gathering operation on Al Qaeda of any country in the region.

The Nigerian Islamist group’s purported spokesman Abu Qaqa, who has been speaking on their behalf over the last year, stated that Boko Haram and Al Qaeda are fighting for the same goal.

“We have links with Al Qaeda and other Jihadists in the world, and we help each other,” Qaqa told reporters by phone.

French foreign minister Alain Juppe said that his country will partner with Nigeria to fight terrorism by providing technical training for security agents and sharing intelligence.

“If Nigeria accepts the French assistance, it will strengthen its fight against Boko Haram,” Juppe told Kano governor Musa Kwankwaso, on his visit to this northern city.

If there are indeed ties between Nigeria’s Islamists and Al Qaeda, Boko Haram’s skills and area of operations would be strengthened and expanded, Sani said.

Officials from the Central Bank of Nigeria said common thieves and Boko Haram robbed more than 100 banks in 2011.

The unabated bank robberies, suicide bombings, and attacks on churches and police stations by suspected Boko Haram members are scaring foreign investors away from this West African nation of 167 million people.

“I think it is a very bad signal to the Nigerian economy that lives and property are not safe,” economist Shuaibu Idris Mikati told IPS.

“Nobody will come to invest in the country facing these security challenges, nor is it good for the tourists; everybody will be jittery whenever they go to a bank,” said Mikati, a banker-turned-business guru.