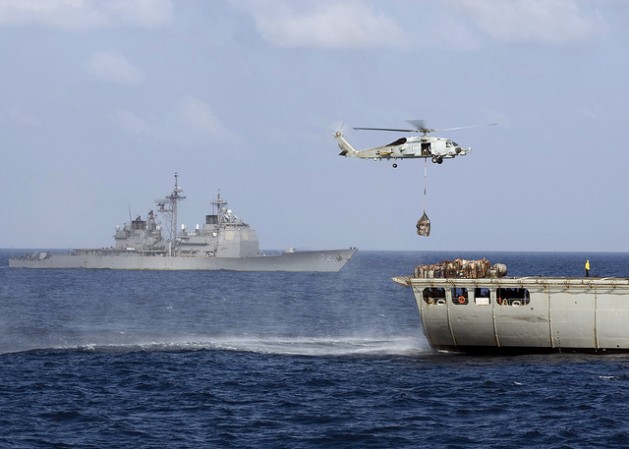 Three years of deployment of naval fleets by some of the major powers has failed to stamp out the modestly-equipped, ransom-seeking pirates. Credit: Surface Warrior/CC By 2.0

UNITED NATIONS, Feb 21 2012 (IPS) - The international community has failed to grapple with the real underlying political and economic issues facing the troubled East African nation of Somalia, which has been surviving without an effective government for over two decades, according to a new study released here.

With the country’s 3,300-km coastline virtually unprotected, industrial fishing vessels from Europe and Asia have entered the area in large numbers and are plundering Somalia’s rich maritime resources.

“Having over-fished their home waters, these sophisticated factory ships are seeking catch in one of the world’s richest remaining fishing zones,” says the report published by the New York-based Global Policy Forum (GPF).

“The foreign boats are illegal, unreported and unregulated – part of a growing international criminal fishing enterprise,” it says.

Authored by Suzanne Dershowitz and James Paul, the report was released ahead of a high-level international conference on Somalia scheduled to take place in London Feb. 23.

Despite the efforts of the African Union (AU), the United Nations and the international community, international policy towards Somalia is not succeeding, admits the British government, which is convening the London meeting, to be hosted by Prime Minister David Cameron.

“After 20 years of sliding backwards, Somalia needs a step-change in effort both from the international community, but also Somalia’s political leaders,” the report adds.

The organisers are expecting around 40 governments to attend the London conference, along with representatives of the United Nations, the AU, the European Union (EU), World Bank, the Inter-Governmental Authority for Development, the Organisation of Islamic Conference, and the League of Arab States.

The GPF reports says: “The battles off the coast of Somalia are closely connected to the onshore crisis in the country, where again we find heavy foreign use of military force.”

During the Cold War, the primary importance of Somalia was its geostrategic location. Today, there are new interests, including mineral reserves of iron ore, tin, uranium, copper and other metals.

"Crises like Somalia are not accidental and they can be solved, but as always in these cases, geo-strategic and economic interests are at stake, preventing sensible outcomes and actually deepening the crisis," James Paul told IPS.

"Unfortunately, the African Union is not playing the constructive role that we might hope for and is working with the big powers to move forward with a militarised policy."

The United Nations and the international community could easily address the illegal fishing and toxic dumping through the creation of a coast guard, a solution that would be much cheaper than the large foreign naval forces and much more appropriate as well, he said.

Better yet, the nations should create a truly strong worldwide regime to ban illegal fishing and toxic dumping.

"There is a plague of criminal activities of this kind that are stripping the world's oceans of all the major fish species and polluting the oceans with toxic wastes," Paul said.

The London Conference shows that there is strong political resistance to such steps, but in practical terms they could definitely be implemented.

"Now is the time to act, before every last fish has been hunted down, and every second Somali killed in the name of counterterrorism," Paul declared.

“Most importantly, there are likely deposits of natural gas and an estimated 5-10 billion barrels of crude petroleum reserves – worth as much as 500 million dollars at today’s prices,” the report says.

U.S., Australian, Canadian and Chinese and other companies are already at work to tap these rich resources.

Somalia remains the prototypical “failed state” – a government that does not rule over its national territory. The Cold War drew the country into regional rivalries and conflict, including the brutal Ogaden War with Ethiopia.

The Somali army grew to be one of Africa’s largest and a military dictatorship ruled. Eventually, the unpopular and bankrupt state collapsed. There followed a series of failed foreign military interventions to restore order.

Still, after three years of deployment of naval fleets by some of the major powers, and in spite of their massive electronic gear and aerial surveillance systems, they have not stamped out the modestly-equipped, ransom-seeking pirates. In fact, pirate attacks apparently have increased substantially since 2008, the GPF report says.

Predictably, the navies have done nothing whatsoever about the other “pirates” – the illegal fishing operators and the toxic dumpers.

James Paul, executive director of the Global Policy Forum and co-author of the new report on Somalia, remains sceptical of the upcoming London Conference.

He told IPS the conference claims to represent an improved international response to the crisis in Somalia, but in fact it is just escalation of the same old strategy of violence.

“Far from addressing root causes and using a holistic approach as the UK government has announced, the conference seeks mainly to rally public opinion around more violence, more intervention, and more counterterrorism options that have failed for the past 20 years and are failing today,” he said.

“We should remember that the conference will be giving its implicit blessing to the recent invasions from Ethiopia and Kenya, that it will be tacitly approving the drone strikes and secret military operations bein gcarried out by the UK, the U.S., France and perhaps others,” he added.

It will also turn its eyes away from the secret prisons, targeted assassinations, shadowy military contractors, and extremely violent behaviour of the African Union forces, which act under the authorisation of the U.N. Security Council, he said.

Some human rights and humanitarian NGOs have been promoting this kind of narrow approach, but the most constructive stance is to reject the violence-centered military policies, as the U.N.’s Office for the Coordination of Humanitarian Affairs did in “an important and courageous statement” in December of last year, he added.

Paul said the violence-prone naval approach has not worked, because it ignores the illegal foreign fishing and toxic waste dumping that is taking place off the Somali coast.

The fishing and dumping provokes the piracy and has led ordinary Somalis to approve the piracy as a legitimate form of national defence.

But powerful members of the Security Council, notably the U.S. and the UK, have blocked any action on fishing and dumping.

“They pretend that there is no information about the matter, even while their naval fleets are closely monitoring the movement of all ships in Somali waters,” Paul said. “So much for root causes and holistic approaches. Violence is virtually the only option allowed onto the table in London.”