UPPER NYONG DIVISION, Cameroon, Mar 22 2012 (IPS) - Kokpa Pascale Moangue, a Baka Pygmy in southeastern Cameroon, has given his children the one thing he always longed for, but his parents could not give him – an education. And he was able to achieve it by obtaining a simple piece of paper: a birth registration certificate. 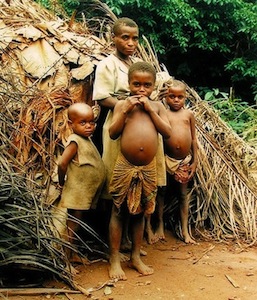 Some 98 percent of Baka Pygmies do not register their children at birth, according to the international development charity Plan International. Credit: Ngala Killian Chimtom

Birth certificates are a basic requirement for enrolment in primary school in Cameroon. But here among the Baka Pygmies, a hunter-gatherer people who live in the equatorial forests of this West Central African country and number 30,000, some 98 percent do not register their children at birth, according to the international development charity Plan International.

A smile lights Moangue’s face as his four children chatter on their way back home from school in Lomie, a town in Cameroon’s Upper Nyong Division, East Region. “I never went to school, but I have big dreams for my children,” he tells IPS.

Moangue’s next-door neighbour, Anzuom Clarisse, has a similar story. She wanted to go to school when she was younger, but could not because she does not have a birth certificate.

But the 19-year old expectant mother says life for her unborn child will be different. “The child I am carrying in my womb will go to school,” she affirms. “I will make sure that my babe gets a birth certificate.”

However, unlike Clarisse and Moangue, not many Baka are willing to register their children at birth.

In 2003, Plan International began its Baka Rights and Dignity Project here. The organisation’s local country director, Barro Famari, says that the project is intended to sensitise Baka Pygmies about their rights and to work with local authorities to ensure that those rights are respected.

While there is no legal discrimination against the Baka, there have been reports of inferior treatment, especially in labour practices, according to the International Women’s Rights Action Watch.

Central to the project is the “Universal Birth Registration Campaign” that seeks to establish birth certificates for all Cameroonian children. Working together with the Ministry of Social Affairs, heads of civil status centres, mayors, and other non-governmental organisations, Plan International helped 12,000 Cameroonian children receive their birth certificates in 2010 and 2011.

Its 2011 Annual Report states, “during the campaign this year (2012), Plan International intends to register and distribute 20,000 birth certificates throughout its six programme units.”

“Plan helped to get birth certificates for my kids,” Moangue beams. “I know their future is brighter now.”

Still, about 98 percent of Baka are not registered at birth, according to statistics from Plan International’s local office. The reasons for this range from the distances to civil status registries, to the ignorance of the need for birth certificates.

“I don’t have a birth certificate any more because my father used it like any other piece of paper, to roll a cigarette,” says 14-year-old Sandra Neckmen. However, she was fortunate this happened after she enrolled in school. Neckmen is now a third-year pupil in the Mindourou government school in East Region.

Denis Njanga’s attitude is typical of some Baka. Njanga, from Yokadouma in East Region says, “that piece of paper cannot put food on the table.”

However, the issue of birth registration is a national one. Less than 34 percent of births are registered in Cameroon. According to a 2007 report on the Cameroon civil status system by the Institut de Formation et de Recherche Démographiques (IFORD), Cameroon faces a real problem of not fulfilling every child’s right to a name and nationality.

The study indicates that the situation is even worse in the northern and eastern parts of the country, where nine in 10 births are not registered within the requisite 30-day period stipulated in Cameroon law.

The low national rate of birth registration is attributed to a general lack of awareness and the mismanagement of civil registration centres, where a simple registration process usually takes longer than 30 days.

“It’s a very dicey situation,” says Kaldaussa Faissam, the sub-director for administrative affairs, the service directly in charge of birth certification in the Ministry of Territorial Administration and Decentralization.

“Most births in rural areas take place at home. Birth certificates are issued only in the hospitals and the procedure is long,” he says.

Kaldaussa says his ministry is formulating new laws to make the birth registration process easier. However, he would not comment on the substance of the new legislation.

“A birth certificate is the first link a citizen has with its government. It shows where a child was born and who its parents are, and defines the child’s nationality,” Kaldaussa says. He adds that the lack of a birth certificate could lead to the abuse of children in instances of early marriages and child labour.