CALAIS, France, Mar 25 2012 (IPS) - It’s 10 am on Saturday morning and a group of migrants is clustered round the entrance to the Migrant Clothes Association in the Calais city centre, eating breakfast provided by the association. Inside, the warehouse is stacked with blankets, tents, trainers and clothes. Some of these will be distributed later by the association’s workers. 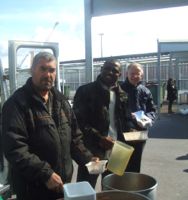 The staff consists entirely of volunteers, including nuns and local residents. One of the older volunteers drives more than 100 kilometres every week to attend these sessions. Another was drawn to the association through childhood memories as a refugee during the Nazi invasion of France.

Pascal Froehly, a volunteer, is a former English teacher. “I’m going to be honest with you, I wouldn’t have lifted a finger for them if I didn’t live here,” he says. “But I cannot ignore it, because it’s not humanly possible.”

The volunteers are part of a broad constellation of NGOs and charities that have sprung up over the last decade in response to the transformation of Calais into a migrant bottleneck.

The groups include established organisations such as the United Nations Refugee Agency (UNHCR), Medecins du Monde and Seccours Catolique – the local branch of the Catholic charity Caritas. Several local organisations are also active, such as the C’Sur collective, La Belle Etoile, l’Auberge des Migrants, and Association Salam, a charity that provides hot meals every evening to migrants in Calais and at other camps near Dunkerque.

Salam was formed by a small group of local residents in 2002, following the closure of the Red Cross reception centre at Sangatte. Now it has more than 300 members.

“When we first started we thought this would be just for a few weeks,” says its formidable founder Sylvie Copyans, while ladling out food at the distribution centre. “We didn’t think we would still be here ten years later.”

L’Auberge des Migrants was formed in 2009 by Christian Salomé, a former worker on the Eurotunnel and his wife Marie. During his 14 years on the tunnel, Salomé witnessed numerous incidents in which migrants were seriously injured or killed trying to jump onto trains or cross the tunnel on foot. He vowed to do something to help them following his retirement.

Each weekend he and a rotating team of French and foreign volunteers, some of whom are asylum seekers and refugees themselves, prepare the lunchtime meals at a former farmhouse about 30 minutes from Calais. Before setting out, the team always sits down for a ritual meal with whoever happens to be around. These gatherings are a microcosm of the multi-ethnic and multicultural society that Front National leader Marine Le Pen – and President Nicolas Sarkozy – have depicted as a threat to French national identity.

Organising these weekly meals and ensuring a constant supply of food from local factories and donors is a major feat of organisation and planning, all of which depends entirely on the goodwill of Christian and his team.

The local authorities allow them to perform these humanitarian tasks and discreetly facilitate their activities. But the focus of these organisations is somewhat at odds with the campaign of repression and police harassment of migrants that has been going on for the last two years.

Salomé is emphatically opposed to what he regards as the futile attempts by his own government and others to stop migrants from coming, and believes that they should be able to come to Europe freely to make their own choices and see the situation for themselves.

Solidarity with the city’s migrants is not limited to organisations. Some local residents have also become involved on an individual basis with the transient foreign population that has passed through the city. Some have put up migrants in their own homes – despite the fact that such activities are punishable by five years imprisonment or a 30,000 euro fine under Article L622-1 of the French Foreigners Law.

In Philippe Lioret’s powerful film Welcome, a Calais swimming instructor falls foul of the law after giving free instruction and a temporary home to a Kurdish asylum seeker who tries to swim the Channel. This scenario did not spring entirely from the director’s imagination. In 2003, two members of the C’Sur collective were fined more than 8,000 euros for taking migrants into their homes and helping them receive money transfers.

While researching his film, Lioret interviewed Philippe Longue, a local architect, who has put up some 300 migrants over the years in his Calais flat and his house just outside the city.

Longue first came into contact with the city’s migrants in 2007 when he met a Turkish woman in the street who was trying to rejoin her family in the UK. Since then he figures he has provided a temporary home to up to 10 migrants at a time, some of whom were convalescing after injuries suffered in attempted crossings.

Longue was arrested for these activities, and though he was not charged, police pressure pushed him to stop – which may have been the whole point of it.

Pierre Falk, a librarian from Boulogne, has also put up migrants in his small terraced house, and has carried bags across the Channel for migrants who have made the journey by truck.

Falk is cheerfully unrepentant about activities that have got him arrested on five occasions in different countries – though so far without being charged. A self-confessed depressive, he admits that helping migrants fulfils an emotional need and has become something of a compulsion.

“Always I’m searching for solutions for them,” he says. “When I see teapots in the garbage I retrieve them for migrants. I can’t say no – it’s a problem.”

Whatever their motivations, all these men and women have encountered at first hand the migrants and refugees who have been blown to their city by the world’s political and economic storms. And at a time when Sarkozy is promising to reintroduce border controls in an attempt to win far right votes, their actions reflect another concept of France – and a different Europe to the ‘fortress’ model that is currently under construction.