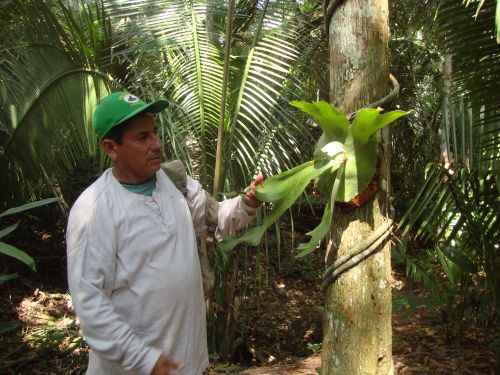 LIMA, Mar 21 2012 (IPS) - In Peru, where over half of the national territory is covered by forests and the logging industry is marred by corruption, transparency and good forest management are closely linked.

Twenty government agencies related to forest management were evaluated by a non-governmental institution in 2011 to determine whether they complied with a legal requirement to operate websites and to what degree they provide the public with access to information.

Within the national government, the Ministry of Environment showed considerable improvement. However, according to specialists, the steps taken by regional governments were even more significant, because within the framework of decentralisation in Peru, it is these agencies which are increasingly responsible for forest governance, particularly in the Amazon region.

Two of the six regions that now are now responsible for controlling, monitoring and granting forest concessions – formerly the excusive domain of the national government – showed the greatest progress: San Martín and Loreto, both in northern Peru.

All combined, these six regions account for 86 percent of Peru’s Amazon rainforest cover.

DAR has been conducting these evaluations since 2009 as part of an international effort coordinated by the British NGO Global Witness, which encompasses four African countries, Cameroon, the Democratic Republic of the Congo, Ghana and Liberia, and three Latin American countries, Ecuador, Guatemala and Peru.

“Making information more transparent contributes to eradicating bad practices and bad management, because it allows the authorities to organise their information, which makes management much more efficient,” Javier Martínez, lead author of the report and coordinator of the DAR Ecosystems Programme, told Tierramérica.

The government of San Martín, for example, operates a special section of its website that provides access to documentation related to logging permits and forest concessions, as well as maps to locate these concessions and determine the tree species that can be legally harvested.

“Over the last year we have managed to post the greatest amount of information possible, but it isn’t easy. There is never enough time, because a great deal needs to be done,” the director of the Department of Natural Resources of San Martín, Miguel Alva, told Tierramérica.

This regional agency earned high praise from DAR for the progress it has achieved. But Martínez noted that they still face the challenge of publishing information on the volume of timber harvested on each concession, so that the public can monitor the sale of this resource.

This would make it possible to confirm “whether logging activity complies with permitted quotas, and can contribute to formalising the sector,” he explained.

The Amazon region of Loreto in northeastern Peru comprises almost a third of the country’s territory. The regional government’s website features an environmental information system with figures on the volume of timber exported and the areas deforested, among other data.

In the coming months, DAR hopes to obtain results reflecting greater transparency in the eastern regions of Madre de Dios and Ucayali, after signing agreements with their respective governments.

But Martínez stressed that the challenges faced vary from one region to another.

Authorities in San Martín and Loreto told Tierramérica that their efforts are constrained by insufficient resources to hire more staff and a lack of equipment.

In San Martín, Alva has a staff of 34 people to oversee 1.5 million hectares of forests with non-stop logging activity, a task that requires at least double that number of personnel.

In Loreto, the director of the Regional Natural Resources Management Programme, Abel Benites, told Tierramérica that 87 employees must contend with monitoring 36 million hectares of forest.

In 2010, the Ombudsman’s Office reported that the agencies responsible for supervising the Amazon region were seriously understaffed.

Numerous operational shortcomings were also detected in 38 offices attached to the national Ministry of Agriculture and regional offices in charge of forest governance. Motor vehicles in good condition were found in only three, and just one was equipped with a boat, despite the essential importance of river transportation in the Amazon region, according to the report, “Forestry Policies and the Peruvian Amazon: Advances and obstacles on the path to sustainability”.

This degree of informality has allowed both officials and users to falsify information, with timber transport permits “laundered” to permit the sale of trees harvested in unauthorised areas, it added.

“If resources are scarce, what are the possibilities for these authorities to place priority on transparency? It needs to be demonstrated that more organised and freely available information contributes to making better decisions,” Elena Castro, the commissioner for the environment, public services and indigenous peoples at the Ombudsman’s Office, commented to Tierramérica.

The national government provides the regions responsible for forest management with only 25 percent of the money earned through the sale of rights to the exploitation of forest resources, stressed the governor of Loreto, Yván Vásquez.

Moreover, some municipalities receive very little of the so-called forest levy, the share of income and revenues obtained by the national government for the exploitation of natural resources that is allocated to regional and local governments.

The district of Tres Unidos in San Martín receives an average of two dollars a month through this forest levy, reported Alva.

Representatives of DAR and the Ombudsman’s Office emphasise the need to find ways of increasing the budget available for the colossal task of guarding the forest. One possibility is raising the fees for the rights to forest resource exploitation, which have not been adjusted in over a decade, despite the requirement to do so established by the regulations of the country’s forest law.