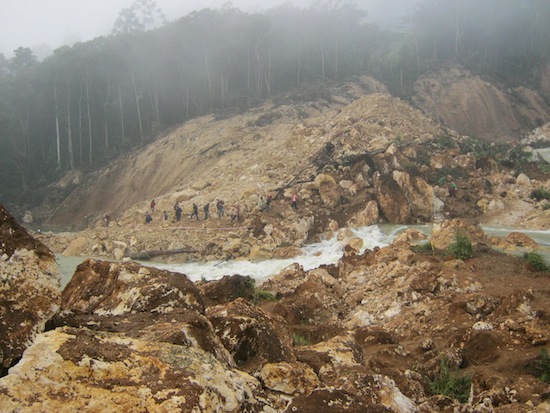 “We want a Commission of Inquiry to look at the landslide and, more widely, Exxon Mobil’s activities,” declared Joseph Warai, a landowner and community leader in the Hela province. “We want our safety guaranteed. We live with a lot of fear.”

The landslide, 1.5 kilometres long, descended from the top of a mountain where the Tumbi Quarry is located, obliterating the villages of Tumbi and Tumbiago, near Tari. The Papua New Guinea (PNG) Red Cross estimates 42 homes were destroyed and 60 people perished.

Since 2010, landowner discontent over the government’s slow delivery on promises regarding project benefit funds has increased, and benefit-related disputes have led to fatalities. Last year, after a local boy died due to toxic poisoning from a project site, landowners forced the temporary closure of the Hides gas conditioning plant in the vicinity of Tumbi.

Landslide survivors were not consulted, said Warai, adding, “We were not told there was an investigation. We only saw some government people visit. We were never asked any questions; we were never asked what happened. We were shocked when we saw the report.”

The report contained no reference to the PNG LNG Project, concluding, “The Tumbi Landslide was caused by continuous heavy rainfall which weakened, or undermined, the existing topography and the limestone formation.”

“Our villages have been here for 13 generations and at no time has there been a landslide here,” Warai said, claiming that landowners had personally witnessed blasting and drilling in the quarry area.

“Explosives were used by Exxon Mobil through its subcontractor, (McConnell Dowell Consolidated Contractors Joint Venture and Clough Curtain Joint Venture, or MDCCJV/CCJV) at the headwaters of Tumbi and Tumbiago [rivers],” he recounted, “They were also doing drilling of the mountain and left around March 2011. Because of the explosives and chemicals applied at the headwaters of our two rivers, the waterway was blocked and applied pressure on the quarry mountain.”

Exxon Mobil has refuted this claim, stating, “No blasting was ever done by the project contractors at Tumbi Quarry since commencing activities at the site in 2010. There was no need for blasting at this quarry.”

Professor Dave Petley, director of the International Landslide Centre at the UK-based Durham University, exposed serious inaccuracies in the report.

In comments published by the Papuan watchdog LNG Watch, Petley asked, “If this was a natural failure, then why weren’t the surface features of the landslide picked up prior to the construction of the quarry and, indeed, during quarrying operations?”

Petley shed doubt on the investigation team’s claim that they “saw clear evidence of liquefaction of the rock formation.”

“This is most surprising,” he wrote, “(as) limestone is not a material that undergoes liquefaction. I have never heard of such a mechanism in a hard rock, and so I just cannot understand this purported process.”

He further commented, “The [Tumbi] quarry site was located right in the middle of the section of slope that has failed. It is bold to suggest that the two are not linked without undertaking a proper investigation.”

Issues of project operation safety in the quarry, and delayed work schedules, drew recommendations by independent environmental consultant D’Appolonia, back in March 2011.

Although, Exxon Mobil claimed that “The Project responded to these recommendations and, by its August 2011 report, (PNG LNG’s independent environmental and social consultant) IESC stated that the Tumbi Quarry appeared to be well-operated and that modifications (have) been made that have enhanced the quarry’s safety.”

While the Minister of Works and Transport subsequently promised landowners an independent investigation, no further information has been announced. Traditional landowners believe that only an independent Commission of Inquiry will deliver valid outcomes.

Local communities say the government is favouring the LNG project, while neglecting those affected by the disaster.

In the aftermath, NDC and Exxon Mobil expedited clearance of a blocked road critical for project access. Relatives of the deceased claim they were placed under duress with threats of repercussions, if they prevented work proceeding.

Kristian Lasslett, PNG coordinator of the International State Crime Initiative and lecturer in criminology at the University of Ulster, commented, “The Papua New Guinea state has the capacity to resist and indeed even oppose corporate agendas. When it fails to do so, it is because it also has an interest in the issue.”

“But there is no direct assistance from the NDC yet,” Warai confirmed, “Our living conditions are overcrowded and very poor. More than 3,000 people are living together in a temporary shelter. The two sources of water have been affected and there is no sanitation. We have called on the government to resettle us, but there has been no response. The only thing they said was ‘let’s open the road.’”

“No-one has spoken to us about helping (us) to recover the bodies,” he continued. Nor has trauma counselling been provided, as recommended.

In February the government informed community leaders of 10 million Papua New Guinea kina (PNGK) in disaster funding, with 7 million PNGK allocated for infrastructure and 3 million PNGK awarded to relatives of the deceased.

But following a violent incident on Feb. 22 between mobile police squads, employed for project security, and landslide survivors at a traditional mourning house, local leaders have demanded victims be given the full 10 million PNGK. The funding is yet to be provided.

The NDC did not respond to requests for comment. Meanwhile, survivors are still waiting for justice.

“When we have exhausted what we can do, the last thing we will do is to shut down the LNG project,” Warai vowed.