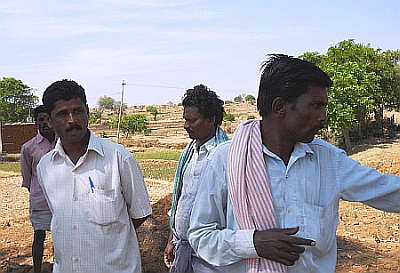 “We cannot do without the government’s cash-for-work programme,” he tells IPS. “We are happy with the National Rural Employment Guarantee Act (NREGA) which gives us an assured income, but we want more work.”

The canal took 29 village individuals 14 days to build, paid for by the government under NREGA, the world’s largest social welfare scheme, with a budgetary allocation of 15.02 billion dollars for the 2011-2013 period.

The government says NREGA has so far provided over 10.1 million jobs to 550 million rural poor households.

Total funding for NREGA since its inception has crossed 29 billion dollars.

Begun in 2005-06, NREGA mandates 100 days of paid, unskilled manual labour to one member of every poor, rural household in a year, the scheme having accompanying legal strictures on transparency, accountability and monitoring.

Any eligible worker not given a job within 15 days of his or her request is entitled to unemployment allowance from the government.

Jobs include soil and water conservation-related measures such as afforestation, irrigation, conservation of ponds and activities related to agricultural productivity. Amendments to NREGA in 2012 have now included dairy and poultry-related activities.

Wages, which began at about two dollars six years ago, have now been increased, with each state adjusting NREGA wages according to respective minimum wages for labour.

In Karnataka state, NREGA now pays a little over three dollars per day, while states like Bihar and Jharkhand pay 2.39 dollars and economically better off states like northern Haryana pays 3.74 dollars.

Yet, in spite of its massive public spending budget, NREGA has come under withering criticism, starting with allegations of corruption in several states.

In northern Uttar Pradesh, massive siphoning of NREGA funds by officials and local administration, including village panchayat heads, has now led to the minister for rural development, Jairam Ramesh, calling for an official inquiry.

The largest of the NREGA scams in Uttar Pradesh emerged from the constituency of Sonia Gandhi, the leader of the ruling Congress party. Not surprisingly, the Congress party fared badly in provincial elections held in the state, India’s largest, in March 2012.

Critics say NREGA’s massive public expenditure is a drain on India’s economy, besides affecting industry by pulling away its labour force and promoting a ‘welfare ethic’.

But, villagers in Dasarahalli and its surrounding areas are united in holding on to NREGA as a straw of hope to earn an income.

“If NREGA is not there, then we can close the gram panchayat,” states Rajappa, a member from the Thimmanayakanahalli village where no wages have been paid in the last two months.

“It is way too much to expect quick results in NREGA,” says Jojo John of the Foundation for Ecological Security, a major non-government organisation which helps panchayats build capacity to work with NREGA.

“Despite all its faults, NREGA has a very strong ‘rights’ component where the poor can demand work and access development,” stresses John. “We do need NREGA.”

Meanwhile, at Dasarahalli village, Venkateshappa, 55, is expecting good returns on his cabbage, maize and ragi (finger millet), grown with the help of water from a canal dug by the villagers adjoining his 5.5 acre farm.

“We have chosen the bigger landholders because their lands are arable, whilst others own rocky fields – we will take those up later,” says Ramapal.

Venkateshappa says he uses five labourers for three months on his land, giving them food and two dollars as wages per day.

Presently, some 20 farmers get water from the NREGA canal while others are waiting for the next round of construction.

NREGA, however, is on shaky ground with shortfalls in payments, administrative hitches and corruption.

India’s official ‘Economic Survey 2011-12’ shows that while the government’s ‘reach’ for NREGA has expanded, it has been able to provide, on average, just 47 out of the mandated 100 days of employment per family per year.

In spite of that for the 2012-13 fiscal year, the Congress-led government has chosen to cut almost 20 percent of the NREGA budget, even while stipulating increased wage rates, straining the programme.

For India’s large population of poor people – estimated at 55 percent of the 1.2 billion population by the United Nations Human Development Report in 2010 and at 37.2 percent this year by India’s Planning Commission – NREGA remains a beacon of hope.

“This is the best programme yet for development of backward areas, but you need to give it time,” says B.S. Shekharappa, chief executive officer of Chikballapur, under which district Dasarahalli village falls.