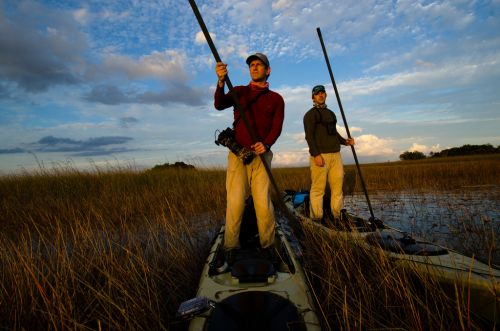 KENANSVILLE, Florida , Apr 20 2012 (IPS) - There was a time when big, yellow cats freely roamed the length of a wild Florida. Today, three medium-sized humans are trekking the length of this southeastern U.S. state – 1,000 miles of swamp, forest, ranchland and blistered feet – in hopes that panthers may one day be able to safely tread the same path.

“We are all focused on the mission and little things don’t get to us,” said photographer Carlton Ward, who along with bear biologist Joe Guthrie and filmmaker Elam Stoltzfus have been walking, canoeing, biking and horseback riding Florida’s natural areas since January.

Along the way they spent too long carrying their canoes and gear up and over countless downed trees by Josephine Creek, and passed two memorable nights camping on an active U.S. Air force bombing range.

“They were practicing shooting down black hawk helicopters,” Guthrie said.

By Earth Day, Sunday Apr. 22, they expect to be closing in on the Okefenokee Swamp in Southern Georgia, and the end of their 100-day journey.

The reason for the journey is to rally support for the creation of a Florida wildlife corridor, a north-south band of open space protected from development and shielded from vehicles, where the endangered panther, and black bears and other wildlife can travel.

“The corridor is a vision,” said Ward on day 47 of their trip, while resting under a hammock of trees at a cattle ranch.

Nearby, sandhill cranes jumped and flapped crazily – their mating dance. The air was dry and the grassy landscape, with grazing cattle and calves, looked more like Texas.

About 100 panthers live in Florida, on 3,500 acres in the uninhabited southwestern region of the state that includes the Everglades, where they hunt deer, wild hogs and rabbits. They are nocturnal and rarely seen by humans. They have been listed as endangered since 1967.

The panthers’ original territory extended from Louisiana up into Tennessee but hunting and encroachment by human development pushed them into what is now a fraction of their former territory. The animals are stressed, with 45 percent of their deaths each year due to fights with each other. For the population to grow, which it must to be healthy, experts say, the big cats need more land to roam.

The panther falls under the Endangered Species Act, a U.S. law governing the care of species on the brink of extinction, and that means the U.S. Fish and Wildlife Service is required to aid its recovery.

The Fish and Wildlife Service determined decades ago that the Florida panther population needs to grow to 240 individuals, and to have a total of three population clusters, with one in the northern part of the state and one in the south and natural areas connecting them, to be healthy and sustainable.

In the central part of the state, far from Florida’s crowded beaches and tourists, large swaths of contiguous open space remain, north and south. Converting these lands into areas reserved for wildlife would not be difficult, Ward says.

“We don’t need to buy land. It’s a matter of getting the easements,” Ward said.

Conservation easements are a novel method of preserving land from development, in which authorities pay owners a fee in exchange for an agreement that it cannot be developed.

But the plan has mostly sat idle. In 2011, the non-profit Center for Biological Diversity petitioned the U.S. Department of the Interior to allow the release of Florida panthers into northern Florida, to build a second breeding population, but the request was denied.

In 2010 the administration of President Barack Obama announced that it wanted to designate 100,000 acres in central Florida as conservation land, by purchasing the development rights. The land would fall within the hoped-for panther corridor.

So far, just 10 acres have been set aside for conservation under the programme.

Ward and his crew hope that their steps over logs and through swamps during the past four months will put muscle and money behind the open space programme and the wildlife corridor.

“It’s remarkable how possible it is. We’ve been on natural land for 47 days and walking the path that a bear or panther could walk,” Ward said during a stopover at a cattle ranch about 60 miles south of Orlando.

Much of the land is broken up by busy roads. Wildlife tunnels under the roads would help make it safe for panther, bear and other animals to travel freely, Ward says.

Male panthers do attempt to travel north already and are inevitably hit by vehicles north of the Everglades, their deaths obvious because of the radio collars many of them wear.

Some land in the planned corridor is clogged with development, like the banks of the Caloosahatchee River,

“The only way to get panthers north of the river is to carry them in a car,” Guthrie said.

At least one panther did brave the crowded riverbank. In 2008, it walked about 1,500 miles through Florida all the way to the interior of Georgia, where it was killed by a hunter.

The group hasn’t seen any panthers on their trek but in the Everglades area they knew the cats were out there.

“It’s amazing how many panther tracks we saw,” Ward said.

They did see scores of other remarkable wildlife, catalogued by Ward’s photos, including an Eastern indigo snake, the largest, non- poisonous snake in the U.S., bald eagles, sandhill cranes, the threatened Florida scrub jay, the rare grasshopper sparrow, and swallow-tail kites, listed as endangered in South Carolina.

It was in the Everglades that for three days Ward’s group saw no other people, as they pulled their boats through saw grass, the old way of Everglades travel, and slept in them at night. Further north, faced with the need to paddle cross the Caloosahatchee in stiff winds, they grabbed their coats – and sailed across.

Guthrie’s blog entries tell the full range of experiences of the team:

“It felt blistering hot and dry all day. My water was down to about half a liter by the time we arrived at our campsite.” Feb. 25

“In howling wind and three foot chop we struggled across the lake (Lake Marion) for the toughest two miles of the expedition.” Mar. 10.

“I grew lazy with the wind and current helping me along. I fished half-heartedly among a few dock pilings, catching a small bass every mile or so.” Mar. 23.

The wildlife corridor and the Obama administration’s 100,000 acre Florida open space plan would include thousands of acres now in ranching, an occupation traditionally fearful of panthers.

But Bud Adams, 86, wants the federal government to buy the development rights of some of his land, and his family has met with Obama and Interior Department Ken Salazar about it.

Adams says he backs the wildlife corridor and is not afraid that panthers would eat his cattle. The panthers are part of the ecosystem, he said.