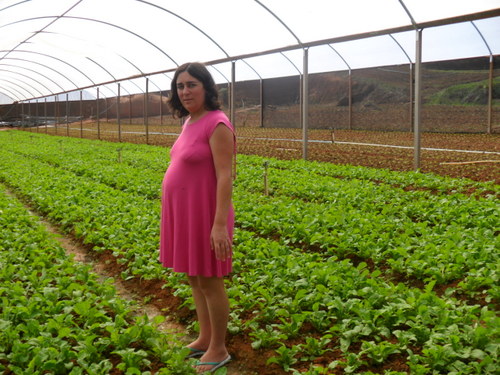 BONSUCESSO, Brazil, Apr 30 2012 (IPS) - In the green belt of market gardens that feeds the Brazilian city of Rio de Janeiro, women farmers are learning environmentally friendly techniques in response to extreme weather events and their effects on the land.

In the hilly Serrana region of the southeastern state of Rio de Janeiro, where many women are small-scale farmers, violent storms in January 2011 caused floods and mudslides that destroyed practically the entire production of vegetables in the area.

The producers are now back to their normal activities, but with greater concern for a less invasive type of agriculture that is better adapted to the new realities of climate change in their lives, 38-year-old Rosana Nogueira, who runs a small family farm, told IPS.

Her 24-hectare farm is in Lúcios, an area that is home to 400 families in the Formiga river basin in the rural district of Bonsucesso, near the city of Teresópolis, one of the zones worst hit by last year’s storms in which 916 people died state-wide.

Nogueira and her 68-year-old mother, Jandira Nogueira, practise farming techniques with a low impact on the environment, protecting the vegetation along river banks and controlling soil erosion, an approach that is starting to help mitigate climate change effects in the area.

Rebecca Tavares, regional director of U.N. Women for Brazil and the Southern Cone region, told IPS that in Brazil, as across the world, rural women “make vital contributions to the welfare of their families and communities, as well as the local and national economies.”

In the face of the challenges posed by climate change, they “have a pre-eminent role to play in environmental management, food production and social reproduction,” she said.

Farmers in the Formiga river basin have seen increasing signs of global warming year after year. Summers are longer, temperatures are higher, and storms are more frequent and more intense, while winters are increasingly dry. All these things affect the cycles of production and the traditional seasons for planting and harvesting.

“We weren’t used to environmental disasters like last year’s. I have lived on this property all my life, and my father has been here for 73 years, and we have never seen anything like it, nor did my grandfather tell him about anything of the sort,” said Rosana Nogueira, whose family was completely cut off for 15 days and was without electricity for a month.

Production recovered in the second quarter of 2011, and farmers developed a new awareness – still in its infancy – of the need to care for the environmental aspects of their work on the land.

“Many farmers still take over forested areas to expand agricultural production, although the forests are a defence against climate change, but others are beginning to understand,” said Nogueira as she toured her farm with IPS. New greenhouses, vegetation planted on hill slopes and recent reforestation of the river bank are some responses to the disaster.

Small farmers in the area are also changing their minds about pesticide use. “We used to think that using a lot of pesticides was the way to increase production, so much so that farmers themselves would experience toxic effects when they sprayed the poisons. Now farmers want to get rid of agrochemicals,” she said.

Nogueira has the definite impression that there are more and more women farmers in the area in charge of small and medium farms, although she has no figures to prove it. Sometimes they are on their own, and sometimes their husbands give them a hand, but the men usually have wage-earning jobs in nearby towns and cities.

And even when a man is running a farm, his wife almost always works alongside him, she added.

“Women pay more attention to the details of the productive process, and we are better organised. We are more concerned about the environment and we are more determined about preserving it and farming in eco-friendly ways,” said Nogueira, who is six months pregnant and lives on the farm with her parents, her husband and their 12-year-old son. All four adults work on the farm.

“Women are more farsighted about the future of their families than men, and we are more open to innovation. The way forward for farming is sustainability,” she said with conviction.

The destructive storms of 2011 caused 12,000 dollars’ worth of losses on the Nogueira farm. Nearly 30 percent of the crops were damaged and 90 percent of the harvest was ruined.

The Nogueiras produce a variety of vegetables and some citrus fruits, and had to use their savings to rebuild greenhouses and regenerate the soil.

Nogueira was able to secure a grant of 8,000 dollars from the Sustainable Rural Development Programme in Micro-Watersheds (Rio Rural), implemented by the state of Rio de Janeiro’s agriculture secretariat.

The Rio Rural programme manages a fund of 79 million dollars provided by the World Bank in 2009 to promote sustainable development practices in rural areas of the state, with a particular focus on women farmers.

“Women are strategic to the sustainability of families and productive units, and they are the ones who are most concerned about food security,” Helga Hissa, the technical coordinator of Rio Rural, told IPS.

Rural women also act as promoters of ecological awareness in their communities, she said. “They lead their families into adopting practices like organic vegetable gardens, and they introduce native species of trees that grow into small forests on their farmland,” Hissa said.

The programme covers river basins in 59 municipalities and 37,000 family farms, comprising some 150,000 people who represent 30 percent of the rural population in the state. Teresópolis, 100 km from Rio de Janeiro, is the nearest big city.

Hissa acknowledged that the 2011 catastrophe has made many people in the area more aware of climate change, a process in which “women have a key role as communicators, because they are enterprising and are more open to trying new practices.”

“We didn’t know how to regenerate the soil, which was degraded by the floods. We took a Rio Rural programme course on green regeneration. They showed us how to plant oats to recover the soil, and to plant along the contours of the land,” Nogueira said.

“I also learned how to make organic vegetable gardens and grow food for us to eat without using agrochemicals,” she said.

She and her family managed to regenerate the vegetation along the banks of the river and to reforest 10 percent of the farm, twice what small farms are required to do by law.

“We used to have 40-year-old trees on the riverbank. Trees hold the soil, maintain the course of the river and help regulate temperature,” her mother, Jandira Nogueira, said.

“What many farmers lack is information about what is happening to the climate. If we don’t know how it is changing, we will continue to have tragedies like last year’s,” she said.