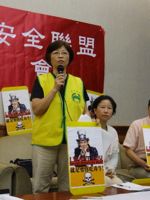 The legislative clash followed the outbreak in California of a native case of bovine spongiform encephalopathy (BSE), otherwise known as “mad cow disease” on Apr. 24.

BSE is a fatal neurodegenerative disease in cattle that causes a spongy degeneration in the brain and spinal cord.

After the first reported outbreak of BSE in the U.S. in December 2003, the DPP government then suspended U.S. beef imports, a ban that was partially lifted in June 2005 and, with the exceptions of products such as beef on bone and various offals, in January 2006.

However, without consulting consumer protection and health NGOs, the restored KMT government of President Ma Ying-jeou signed a protocol with Washington in October 2009 that mandated the lifting of Taiwan’s existing ban on imports of bone-in beef, intestines and ground beef.

In the wake of a storm of protest, lawmakers reinserted restrictions on imports of brains, intestines and ground beef from countries with BSE risk, including the U.S., in the food safety law in January 2010, but permitted the importation of T-bone steaks and other “beef on bone” produce.

In the wake of the latest BSE outbreak, the Taiwan government initially maintained that there was no need to suspend U.S. beef imports.

In response, lawmakers from the opposition Democratic Progressive Party, the Taiwan Solidarity Union and the People First Party won a 42 to 39 vote in a full session of the 113-seat national legislature to change the legislative agenda on Apr. 27 and put to a floor vote a resolution to suspend imports of all U.S. beef and beef products, and remove U.S. beef and products from display shelves and markets.

An emergency mobilisation by the ruling KMT caucus blocked the resolution by a 44-45 vote as KMT Legislative Speaker Wang Jin-pyng cast a tie-breaking vote for the first time in nearly a decade.

National Food Safety Alliance spokesman Ho Tsung-hsun told IPS that as the speaker, Wang should have maintained political neutrality, but instead “put the interests of the ruling party above those of the people.”

Moreover, Ho added that the result showed that the ruling party “should be able to muster enough votes to defend the government’s decision” to open Taiwan’s market to ractopamine – laced beef imports.

“Our alliance will have no option other than to push for recall votes against KMT legislators who support deregulation next year and let the people have a chance to display their views,” Ho added.

Nevertheless, the lack of consensus in the ruling party ranks was exposed by the failure of 19 KMT lawmakers to appear for the vote, despite the prospect of party discipline.

While most of the no-shows cited “family affairs” or “scheduling conflicts” to explain their absence, KMT at-large lawmaker Ms Yang Li-huan frankly told reporters that “if we import and give the people foodstuffs that we shouldn’t import and that are poisonous and illnesses break out in a few years, who will bear responsibility?”

While the resolution did not pass, it may have had political impact.

On Apr. 30, Department of Health Minister Chiu Hung-ta stated that the DOH will send a delegation to the United States to inspect slaughter houses and added that if the OIE raised the level of the alert over BSE in the U.S., the Taiwan government “will immediately suspend imports of U.S. beef and beef products.”

Moreover, the fate of the KMT government’s plan to liberalise imports of U.S. beef with residue of the growth drug ractopamine was thrown into doubt by the BSE outbreak, the Apr. 27 legislative vote and an Apr. 28 mayoral by-election.

On Apr. 22, the DOH had issued a surprise announcement that it had set an “acceptable daily intake” for ractopamine intake of 1 microgram per kilogram, the same level that is used presently in Japan and Australia compared to the 1.25 microgram ADI adopted by the U.S.

The announcement came one day before the Social Welfare and Health Committee of Taiwan’s national legislature was slated to review proposed changes to the food safety regulation law and was decried as a “surprise attack against the Legislature and the health of the Taiwan people” by DPP Legislator Ms Tien Chiu-chin.

The KMT government has proposed changes to the food regulatory rule book that would authorise the Cabinet itself to set a “safe standard” for residues for additive such as ractopamine, while the DPP proposes a “zero indication” standard and other lawmakers call for direct bans or for the Legislative Yuan itself to set the standard.

Despite the defeat on the BSE resolution, opposition lawmakers succeeded on Apr. 27 in blocking an attempt by the KMT to refer the ractopamine-related draft revisions directly to a second reading.

“If the revisions were sent directly into a second reading, the KMT would have been able to put the process into a black box of party-to-party negotiations and there would be no opportunities for public hearings or direct debate on the articles in committee,” said Soochow University political science professor Lo Chih- cheng.

Another variable was added Apr. 28 when the potency of the recall threat raised by food safety activists was bolstered by the stunning victory scored by the opposition DPP the day after the Legislative vote.

In a by-election for the mayoralty of the historic port city Lukang on the central west Taiwan coast, DPP candidate Huang Chen-yen trounced a KMT rival by a 71 percent to 29 percent margin even though the previous mayor was a KMT politician who is now a legislator.

“The big margin of victory for the DPP in Lukang township by-election shows that there is a real possibility that recall campaigns could succeed,” said Lo.

“This vote indicates that Ma is already a lame duck and KMT legislators will have to watch out for themselves if they want to stay in office or get elected,” said Lo. “The beef issue is far from resolved.”