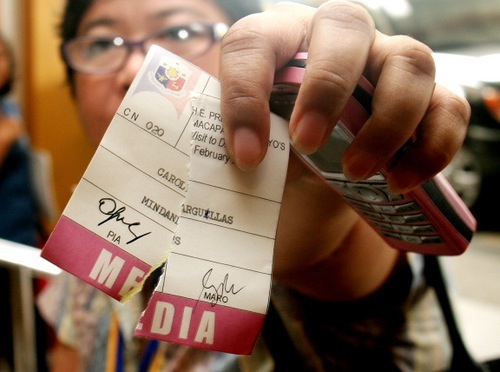 Reporters say journalism is "not more fun" in the Philippines. Credit: Keith Bacongco/CC-BY-2.0

MANILA, May 10 2012 (IPS) - Reporters working in the Philippines, the world’s third most dangerous nation for journalists, are having difficulty identifying with the “It’s More Fun in the Philippines” tourism promotion campaign launched by the Liberal Party-led government of President Benigno Aquino III.

The Southeast Asian nation’s reputation for press freedom and safety has yet to recover from the notorious Ampatuan Massacre of Nov. 23, 2009 in Maguindanao, Mindanao, in which 58 persons, including 32 reporters, were slaughtered by the private army of a local political clan chief, Andal Ampatuan Sr.

A total of 196 persons have been charged in the massacre, including clan patriarch Andal and his grandson, Anwar Ampatuan Jr, but less than 100 have been arrested and not a single one convicted of any crimes.

While the government attempts to paint over the tragedy with billboards proclaiming the joys of holidaying in the Philippines, media workers are continuing the fight for accountability.

A formal statement issued by the National Union of Journalists of the Philippines (NUJP) to mark World Press Freedom Day on May 3 declared, “There is little reason for celebration since not a single mastermind in any of the 152 murders of journalists since 1986 has been arrested, prosecuted and convicted.”

Most of these killings occurred during the nine years of rule from 2001 to 2010 under former president Gloria Macapagal-Arroyo, who is now in detention on charges of electoral sabotage, but at least 12 have occurred in the past two years under the Aquino administration.

“Murders of media workers, just like all other extrajudicial killings, are a matter of State accountability,” declared the NUJP. “If the Philippine press remains free despite all the threats against it, it is not because of the government but because the press insists on being free.”

Nevertheless, the presidential office in the Malacañang Palace publically marked the country’s improved ranking in the annual Freedom of the Press index, published by the Washington-based human rights advocacy group Freedom House on May 1.

The index cited a reduction in violence against journalists, attempts by the government to address impunity and expanded diversity in media ownership among its reasons for the improved rating.

Communications Development Secretary Ramon Carandang acknowledged on May 2 that “more needs to be done”, but stated that the improved ranking had recognised the Philippine government’s attempts to strengthen press freedom.

On the following day, presidential spokesman Edwin Lacierda vowed that the Aquino administration would not tolerate extralegal killings, especially attacks on journalists.

“After the Ampatuan Massacre, there has been no improvement on the issue of journalist killings or in the overall plight of journalists in our country,” he said.

Alburo told IPS that 124 Filipino journalists have been killed on the job since the end of the former dictatorship of the late Ferdinand Marcos in 1986, but only 10 of those cases have been solved.

“We are one year away from mid-term legislative and local elections next May and, based on our information, the family that perpetrated the (2009) massacre still have relatives in power and are still amassing private armies even as their patriarch and other senior clan members are facing trial,” he added.

“The Philippines has the (unfortunate) distinction of being rated the third most dangerous country for journalists, behind Iraq and Somalia and the only one of the three which is a democracy. Nov. 23 has been designated as the World Day Against Impunity, but the current president (has not even blinked) an eye about the impact of these notorious distinctions on our country.”

“It is with great sadness that I say things are not going to improve because all the factors that give rise to a culture of impunity are still present. Journalists in this country are still very much in danger.”

Another channel for powerful politicians and tycoons to restrict media freedom is through frequent filing of criminal libel charges against journalists, he said. The NUJP and other media unions and associations are currently leading the movement to decriminalise these charges.

Significantly, on Jan. 28, the Geneva-based United Nations Human Rights Council (UNHRC) resolved that the laws in the Philippines that criminalise libel are incompatible with the International Covenant on Civil and Political Rights (ICCPR).

The decision came in response to an appeal by Davao broadcaster Alex Adonis, who was jailed from 2007-2008 for reporting correctly that a leading local politician had been caught in bed with his alleged mistress by the latter’s husband.

“Such a concentration (of the media) often compromises journalist ethics and editorial independence,” Alburo said.

NUJP aims to “jump start” campaigns to stop the killing of journalists, push for the decriminalisation of libel against journalists and promote passage of a robust Freedom of Information Act in May, when the UNHRC is conducting a review of the Philippines’ human rights record under the ICCPR.

The NUJP and other newspaper, television and broadcast journalist unions held a meeting on May 3, which resulted in the ‘Manila Declaration on Media Workers’ Rights and Welfare’, to be used as a platform for future unity and campaigns.

Despite a pervasive mood that there is very little to celebrate, over 40 NUJP members gathered at the fifth consecutive annual ‘Press Jam’ to commemorate World Press Freedom Day at the Skarlet Jazz Club in Quezon City on the evening of May 2.

“It has always been a trait of Filipinos to be able to laugh amidst very serious situations and troubles, so we hold a Press Jam (where) we can sing and be carefree for at least one night,” said Alburo.

Still, the festivities were not completely lighthearted; the event featured drawings by the children of journalists who were murdered in the Ampatuan Massacre and other incidents.

The artwork expressed the fear and sadness that still surrounds the tragedy, such as a drawing with the plaintive question, ‘Why is Daddy sleeping so long?’

On an ironic poster asking ‘Is it more fun in the Philippines to be a journalist?’ one NUJP member wrote, ‘Yes, you feel like a survivor all the time’.

Another pundit had added, ‘With criminal libel, 152 killed since 1986, what more can you ask for?’

A more hopeful note was stuck by one NUJP member, who wrote, ‘Yes, so much to write about, so much to change’.