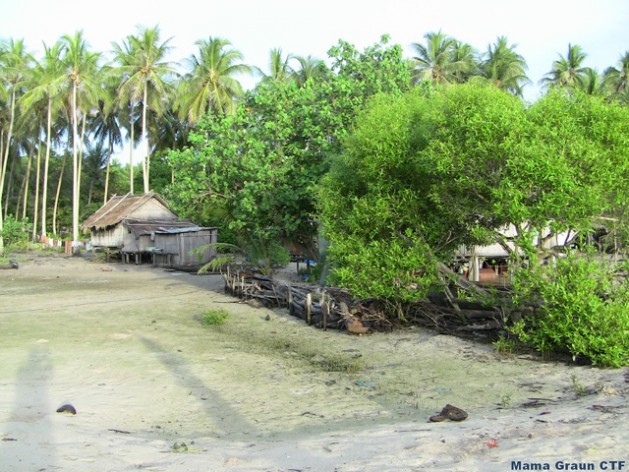 In a bottom-up approach to fighting climate change, the indigenous use of mangroves is now leading local and national plans to stem the destruction of land and communities by coastal flooding and erosion.

As global warming melts ice and glaciers, small island states are the first to be threatened by thermal expansion of the world’s oceans. The Pacific Climate Change Science Programme predicts that, under a high emissions scenario, Papua New Guinea could experience a sea level rise of 4-15 cm by 2030.

The government has identified coastal flooding and malaria as the two climate change hazards expected to cause the greatest damage to land, people and infrastructure. Coastal flooding has affected 8,000 people annually over the past 15 years, and could impact 65,000 people within the next 18 years. Experts say the cost of damage from coastal flooding could increase from 20 million dollars per year to 90-100 million dollars annually by 2030, but implementation of adaptation measures may reduce losses by 65-85 percent.

Climate adaptation is not a new concept to those who have lived along the nation’s coastlines for generations. In Milne Bay and Oro Provinces on the east coast, the Maisin, Are, Doga and Dima people of Collingwood Bay have long possessed knowledge of the importance of mangrove forests to conserve coastal ecosystems.

The waterlogged trunks and roots of mangrove trees, which grow in saltwater inter-tidal areas along rivers and between land and ocean in tropical regions, consolidate sediment, thereby strengthening coastlines and protecting against flooding and erosion.

According to Mama Graun, a local conservation trust fund, 30 of the 42 mangrove species found in Papua New Guinea grow along 159.8 kilometres of Collingwood Bay’s coastline. The tropical tree system is central to the sustainable life of villages. It provides timber for building dwellings, firewood for cooking and traditional medicinal remedies, while mangrove swamps harbour marine foods, such as fish, oysters and crabs.

Scientists are now concerned that degradation and loss of half the world’s mangrove forests over the past 50 years could be contributing to 10 percent of global deforestation emissions and increasing fragility of coastal areas.

Jane Mogina, former deputy dean of the School of Natural and Physical Sciences at the University of Papua New Guinea, is now executive director of Mama Graun, which builds capacity and provides funding and technical advice for climate change mitigation and adaptation projects. She recalled that Cyclone Guba, which swept through the region in 2007, left permanent environmental damage that many communities have still not recovered from.

“In Collingwood Bay, there are significant flat land areas where people make and settle on gardens; a lot of those got flooded and washed away. We estimate that some small mangrove islands literally got knocked over.”

“What the cyclone has done is weakened the (eco)system. So any high tide will continue to wash away an already weak system,” she continued.

In the village of Bogaboga, in South Collingwood Bay, with a population of 500, an increasingly aggressive sea combined with effects of a drought in 1997 has led to coastal erosion, saline contamination of spring water and destruction of crops.

People now face lack of food and an increase in malaria and diarrhoea. In the north of Collingwood Bay, the village of Uiaku, home to 780 people, has high crop diversity, but infrastructure and food gardens have been hit by intensified coastal and inland flooding. The community now has contingent plans to migrate further inland.

Mangrove degradation has contributed to an increasingly vulnerable coastal ecosystem.

“The man-made degradation that is happening is all to do with firewood and construction,” Mogina explained. “The most significant is firewood. With population increase, there are more people with more houses to build and 90 percent of Collingwood Bay houses are built with mangrove wood.”

In 2009, after consultation with communities about how they were employing traditional knowledge to combat climate change, Mama Graun began resource mapping in Collingwood Bay for a mangrove- based climate initiative.

“When we were looking at communities’ use of local resources, mangroves emerged as one of the most important ecosystem services, especially in rural communities that do not receive too much help from the government or from outside, particularly after disasters,” said Mogina.

Other local adaptation strategies include constructing seawalls, drainage systems and houses on higher foundation posts and buffering dwellings with sand and coconut husks.

“Growing and strengthening mangroves doesn’t stop the sea level rise, but it does stop erosion,” Mogina said. “Communities with mangroves as a barrier to the sea are much less impacted by storms and cyclones.”

In 2011, Mama Graun planned the planting and rehabilitation of mangrove forests along 47 kilometres in Collingwood Bay over the next five years, in the first phase of a project that will eventually incorporate 28 villages across 206 km of coastline.

By providing grant incentives to communities in the form of education and tuition fees, the cost of the mangrove project will be kept to an affordable 14,000 kina per hectare, which compares to the average cost of approximately 131,356 kina per hectare. Most importantly, participating villages will hold ownership of the project.

“We provide the funding, so that they can develop a management plan (for the project). The really big lesson is to work with communities to develop adaptation activities that they want and are most appropriate. This is what community conservation is all about, you empower people to take responsibility themselves,” Mogina emphasised.

Today the local NGO shares its knowledge nationwide through the Office of Climate Change and Development (OCCD) and is contributing to a national initiative to plant two million mangroves throughout the country.

According to Luanne Losi, OCCD’s adaptation policy analyst, “OCCD decided to focus on mangroves because it was seen to be a low cost method that would have an impact on a large number of people. The mangrove initiative is being conducted in association with other climate change adaptation actions, such as a coastal early warning system and dry stone wall project.”

OCCD programmes are aligned with Papua New Guinea’s Vision 2050, which outlines the government’s aims to develop mitigation and adaptation capacity in all impacted communities and provide weather and natural disaster monitoring systems in all provinces.

However resourcing and funding remain substantial challenges. Currently the OCCD is working to attract private sector investment and support the local work of NGOs, including Mama Graun, the Nature Conservancy and World Wildlife Fund.