NEW YORK, May 16 2012 (IPS) - In the coming decades, the world’s population is expected to grow by at least another two billion people, 80 percent of whom will live in cities by the year 2050. 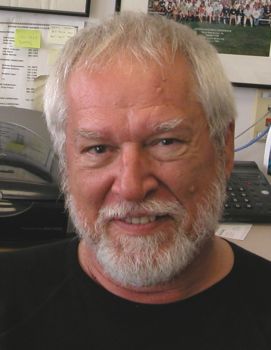 Feeding those people will stretch our current agricultural system to the limit, and take a substantial toll upon the world’s ecosystems.

By combining agriculture with architecture, Despommier hopes to see multi-story high-tech greenhouses become integrated into urban skylines in the near future.

Q: What is a vertical farm?

A: The concept of vertical farming is really quite simple. You simply take a greenhouse that’s high-tech, and stack (another) on top. So you have multiple greenhouses on top of each other.

Q: Where does the idea come from?

A: The modern concept had its origins in the late 1960s with Dr. (R. Buckminster) Fuller, John Todd and a few other futurists who actually suggested we should be growing food in tall buildings. But the idea never caught on because the timing wasn’t right.

The current concept of vertical farming started in a classroom that I taught – at least I think that’s where it started for me – back in 1999. And then we put our projects on the Internet in 2004 and next thing you know, we have some vertical farms to talk about.

Q: Where are those vertical farms located?

A: Three years ago there were none. But today, there are seven vertical farms. We can begin in Korea, which is a government-run project. It’s only three stories, but it’s modern, high-tech. Move to Japan… it takes place in a 747-sized hangar building. It looks like there’s an airplane inside but actually there are crops in there.

(The Japanese) are building another one near Fukushima, just to prove to the world that they can grow food anywhere, even in a damaged area. Because it’s all self-contained.

They’re building a 17-story vertical farm in Sweden. I can’t wait to see what that building is going to look like. They want this to be the gold standard for vertical farming. There also is one planned for Holland called Plant Lab. They want to build it underground, so it’s basically an up-side-down three story vertical farm, with no visible light. They are going to provide all the light via grow lights.

There are two vertical farms in the United States. There is one in Chicago, which is a retrofitted meat packing plant. And then there’s one in Seattle, it’s a brand new company with only two stories. But I understand they’re going to scale this up in the near future.

Finally, I understand there is one vertical farm in Singapore also. It’s sort of similar to the one in Korea, it’s about a three-story vertical farm as well.

Q: Those farms seem to be in very diverse geographical locations. Does climate or pollution has any effect on vertical farming?

A: My opinion about the feasibility of vertical farming is that there’s no place on earth where you could not do it. And I can name some places on earth – if they would vertically farm – that would be much better off than they are today.

Let’s take the country of Iceland, as an example. They have six months of winter and six months of summer. But they have all the geothermal energy they could possibly use, and more.

A vertical farm would be a great example of how to integrate this to an energy-rich country with a great need for fresh vegetables. I look at all the Scandinavian countries in the same way.

Q: How much does a vertical farm produce? Is it financially attractive?

Q: What are the economic benefits of vertical farming?

A: One is no food miles (transportation from farm to plate). Two, no agricultural runoff. A flood takes all the agricultural pesticides and herbicides and moves them from the lands to the river to the ocean. When you get it into the ocean it spoils everything. Vertical farming doesn’t do that.

Three: new jobs, lots of new jobs. Four: the use of abandoned city properties. A warehouse, for instance, just sits there, with nothing to do. You can fill that with agricultural initiatives that use grow lights.

Because agriculture indoors uses 70 percent less fresh water than outdoor agriculture, you save a lot of water too.

Other advantages: you can make a profit doing this of course, because you are growing year-round you can exclude insect pests if you build your buildings correctly. You can even take an old building and make it insect-proof. You can keep out rodents, for instance, you can recycle your energy through recovery by green high-tech incineration.

Plus, you can grow anything indoors you want.

Q: And the quality of the crops? How does that compare?

A: The history of indoor farming is fraught with improper nutrients for the plants, which makes them nutritionally less desirable than outdoor plans. This is in the past now. The biggest improvements have been nutritional because we now know all of the elements that plants need in order to grow. And we need seven more (nutrients).

So if you make a solution in water of those 18 (nutrients) plus the seven that we need and then you expose the root system to that solution, the plants would not only contain their nutrients for them, but also what we need.

I think today’s hydroponically grown tomatoes and lettuce and cucumbers and zucchini and green beans have the same or better nutritional value as the outdoor crops. The outdoor crops can’t control the uptake of heavy metals which come from things like leaded gasoline.

We stopped using leaded gasoline in the 1970s, but the lead from it is still around and still in the soil. They also take up pesticides; they will also take up herbicides. Those are things we don’t want in our diet, and we can exclude them by growing under controlled conditions where we don’t use them at all.

Q: What are the places that really need this the most?

A: The concept of vertical farming will emerge in most people’s perception as an elitist activity. Because only people with the most money and a high desire for local produced vegetables and fruits will support this concept. As with all other ideas that have application to the general population, the idea will be manipulated by technology, so that it becomes economic, efficient, mobile and modular.

Imagine vertical farming as a LEGO-like structure, in which all the (components) that fit together are already growing food. If you walk into this warehouse, it’s enormous, and the order is for a vertical farm eight stories tall that manufactures lettuce and some really exotic crops. And you click them all together and ship them out. You can situate these on a base anywhere in the world.

It is not an elitist activity at this point. Suddenly it becomes a way of intervening in natural disaster, to prevent unnecessary deaths. To prevent high rates of infant mortality, to supply food on a continuous basis for places that have no soil, like Sub-Saharan Africa, most of South Asia, and a lot of places in Southeast Asia. Places that are people-rich and food-poor.

Vertical farming will eventually morph into a strategy to supply clean drinking water and abundant safe to eat food to whoever needs it. Not (just) whoever wants it.