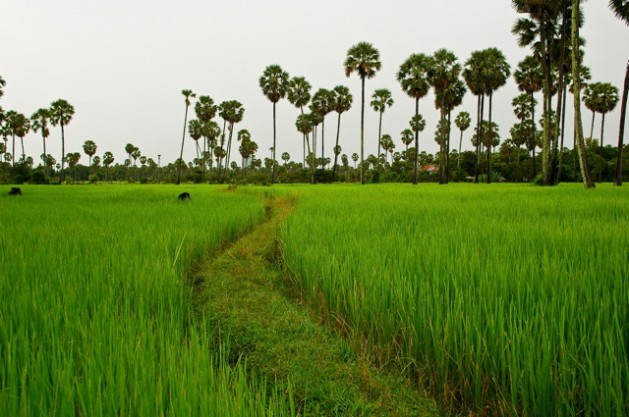 TOKYO, May 24 2012 (IPS) - This April, a small rice paddy field in Minami Sanriku, destroyed by the massive earthquake and tsunami last year in Japan, provided one of its most fertile yields yet – bringing hope and joy to the devastated local community.

Dubbed ‘Renaissance Rice’, the yields were the result of collective efforts of local farmers and residents who had worked together to create a society around sustainable farming.

Ecologists say the restored rice fields, located in some of the worst hit areas on Mar. 11, have become sites of sustainable recovery against the widespread devastation that continues to haunt the disaster- affected areas on the northeast coasts of Japan.

“The amazing feat of restoring a rice field that had been wiped out by the tsunami is based on restoring the surrounding ecosystem. New technologies that are dependent on ambitious machinery or large funds do not always provide the best answers,” explained Shigeki Iwabuchi, spokesperson for the Rice Paddies Network, Japan.

One of the landmark rice fields belongs to Ouya Middle School in Minami Sanriku. For ten years, students from the school had harvested rice from a plot measuring around 10,000 square metres in an attempt to study traditional rice growing in the bitterly cold Tohoku area.

They used a system based on flooding the field with fresh water during the winter to fertilise it for seed planting in the spring, a methodology rarely practiced in present day Japan.

Then came the disastrous, 15-metre high tsunami last year. The tidal waves swept through the rice field, saturating it with salt and covering it with piles of debris. Hope seemed lost.

“But last winter the students began to express (interest) in restarting the rice farming. This is when we decided to gather a consortium of volunteers and experts to do what seemed impossible against the devastation around us – clear the field to start farming again,” explained Yoshinori Uesugi, the school’s principal.

The result of that brave decision has been stunning. The rice harvest this year was more than one tonne, the highest ever collected from the tiny field.

Iwabuchi, who is also from the Tohoku region and an expert on marshland preservation, led a team comprised of agricultural experts, local farmers and volunteers who arrived from as far away as Tokyo to be able to participate in the effort that marked a radical departure from official recovery plans.

“The salination of thousands of acres of destroyed farmland and coastal forests was one of the biggest (obstacles left by) the tsunami. But by creating fertile ground again in small rice plots through simple desalination efforts we have revived the wisdom we have ignored till now – that local societies have always been dependent on ecosystems to save and protect their livelihoods,” he said.

Dubbed the Tohoku Green Renaissance project, the first step taken by Iwabuchi and his team of university researchers, businessmen and local environmental civic organisations was to clean up the affected ecosystems.

The government channeled an abundant supply of fresh water, which was used to dilute salt in the rice fields. By cleaning damaged ecosystems such as springs, streams and wetlands, the project focused on attaining a sustainable supply of fresh water rather than relying on the broken piping system that had been used hitherto.

In contrast to the official cleaning-up process organised by the government, using bulldozers and other heavy equipment, Iwabuchi’s team cleared rubble with their bare hands and even removed abandoned cars.

“We did not use heavy machinery because it would harm the layer structure of valuable soil. For desalination we started flooding the rice paddies by using fresh water from the local spring wells and rivers that had already been cleaned,” he said.

Indeed, by January this year the team had detected insects and fresh water marine organisms in the soil, a welcome sign of biodiversity on the ground.

Even more important was the discovery, in a field in Kesennuma, that the tsunami had brought with it rich mud with a high diversity score.

Grassroots efforts such as these have also brought economic benefits – part of the sales from rice cropped in winter-flooded paddy fields are donated to farmers who have lost their land.

Armed with the success of their project, the team of ecologists and their supporters are pushing for sustainable farming and ecological practices in disaster recovery in Tohoku.

Though the renaissance rice project has only been tested on small plots, the East Japan disaster has nonetheless made clear that sustainable adaptation and recovery measures offer the best chances of survival.

“Modern Japan was built on coastlines on the basis that technology can (save us); but that has been proved wrong,” said Iwabuchi.