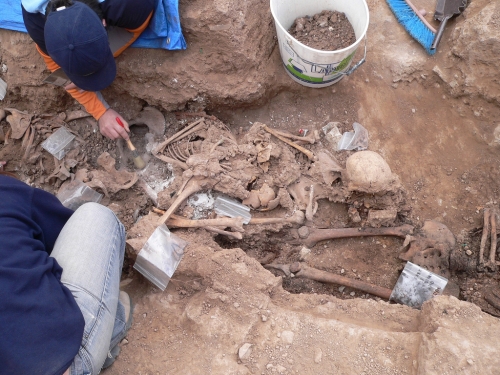 BUENOS AIRES, May 9 2012 (IPS) - Global rights watchdog Amnesty International presented an Argentine court Wednesday with documents which show that Spanish courts are blocking lawsuits brought by the families of victims of human rights crimes committed during the 1936-1939 civil war and the 1939-1975 dictatorship of General Francisco Franco.

The report was presented by the president of the Spanish chapter of Amnesty, Esteban Beltrán, to the federal judge who is investigating Franco-era human rights abuses in response to legal action brought by the families of victims, based on the principle of universal justice.

Beltrán told IPS that “in Spain, all of the doors are being closed to the victims who are seeking justice, truth and reparations for forced disappearances, systematic torture and extrajudicial executions.”

“We have come to urge the Argentine justice system to continue investigating, and we have provided documents demonstrating that this work is not being done in Spain, and that the cases are systematically shelved without a single paper being moved,” he said.

In 2006, human rights groups in Spain provided the Audiencia Nacional – the national high court – with evidence that the number of forced disappearances during the civil war and the Franco regime totalled at least 114,000, and that some 30,000 babies and toddlers were stolen from their parents.

Garzón had based his investigation on the principle of universal jurisdiction, which states the crimes against humanity, genocide and terrorism are not subject to statutes of limitation or amnesties and can be tried at any time in any place.

He had invoked the same principle when he attempted, while amnesty laws were still in force in Chile and Argentina, to prosecute former Chilean dictator Augusto Pinochet and others involved in the forced disappearance, torture and murder of thousands of people committed in the 1970s and 1980s by the dictatorships in these South American countries.

Although in February, Spain’s Supreme Court found Garzón not guilty of overstepping the bounds of his jurisdiction, it criticised his interpretation of international human rights law, and said he was wrong to start investigating human rights crimes in Spain because the 1977 amnesty was still in effect for human rights violations committed during the dictatorship.

But the Supreme Court disbarred him for 11 years in a separate case, involving illegal wiretapping in a high-profile prosecution for corruption. He is thus unable to continue investigating human rights crimes in Spain.

The report that Beltrán presented to Argentine Judge María Servini analyses 21 of the 47 cases that the Audiencia Nacional referred to provincial courts, and concludes that nearly all of them were simply shelved, with no action being taken.

Only in two cases were measures taken to exhume bodies from some of the hundreds of unmarked common graves scattered around Spain, identify the remains, and hand them over to surviving family members, the report states. But after this was done, these cases were also blocked, it adds.

The aim of the Amnesty report, titled “Closed Cases, Open Wounds”, is to show that the victims have been abandoned by the justice system in Spain, where these crimes have never been investigated, the human rights group says.

It states that “the rights to truth, justice and reparations for the victims of crimes under international law committed during the civil war and the Franco era continue to be denied in Spain.”

The report openly contradicts the Spanish government’s response to Judge Servini in June 2011, when she was informed that according to Spain’s attorney general’s office, cases involving Franco-era human rights crimes were being prosecuted in that country.

But Amnesty International’s investigation gave rise to a very different conclusion, says the report, which underscores the reluctance of provincial courts in Spain to take action, and their readiness to shelve the cases, while citing new violations of rights that they thereby commit.

“There is a clear violation of the right to justice” due to the failure to investigate the charges, the lack of respect for the right of victims’ relatives to find out the truth, and the denial of the right to reparations, says Amnesty International Spain.

The courts also failed, the report adds, to notify the families of the decision to dismiss the cases after taking virtually no action on them.

In addition, Amnesty questions the legal arguments cited by the courts.

Although the lawsuits involve crimes against humanity, the courts in Spain have argued that the statute of limitations has run out on the crimes or the 1977 amnesty law is still in place, or they have dismissed the cases on the grounds that all of those allegedly responsible are dead.

“Amnesty International considers that Spain is failing to fulfil its international obligations,” states the report, before urging the Argentine courts to continue investigating the crimes committed in Spain.

The legal action in Argentina was filed in April 2010 by Inés García Holgado and Darío Rivas, relatives of victims of Franco-era repression. They have since been joined in the lawsuit by the family members of other victims.

Carlos Slepoy, an Argentine lawyer based in Spain who represents several of the plaintiffs, told IPS that the lawsuit so far involves 20 cases. But he said the number could climb “into the hundreds” as relatives of other victims join in the legal action.

Slepoy said political prisoners who were arrested for their political or trade union activities and affiliations during the final stage of the regime have also come to Buenos Aires to testify in court, bringing powers of attorney enabling them to represent other victims.

Judge Servini plans to travel to Madrid in June to take depositions in the Argentine Embassy from survivors of the repression or family members of victims who wish to join the lawsuit as plaintiffs.