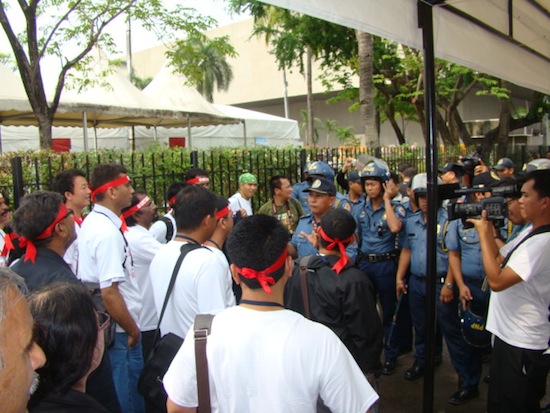 MANILA, May 7 2012 (IPS) - The exclusion of certified labour union delegates from the official opening ceremony of the Asian Development Bank (ADB) meeting here on May 4 revealed a wide gap between the Manila-based development bank’s promises and practices on labour rights.

Over 70 members of the Global Union Federations (GUFs) held a silent protest at the official opening ceremony of the annual meeting of ADB governors at the Philippine International Convention Centre (PICC), after being prevented by police from entering the complex even though they were all certified delegates.

Of the record 5,033 participants in the Manila assembly, 452 delegates represented civil society organisations, including trade unions, also a record turnout according to ADB data.

Unionists had originally intended to hold a silent protest within the plenary hall, but were prevented from entering the convention centre by security guards of Philippine President Benigno Aquino, who attended and delivered an address at the ceremony along with ADB President Haruhiko Kuroda.

“ADB officials later allowed us to enter since we were all delegates, but we had to walk around the PICC and by the time we got to the reception hall, the ceremony was over,” Laksmi Vaidhiyanathan, regional secretary of PSI told IPS.

“We were very unhappy, but they were probably doing this because of the president’s security,” observed Vaidhiyanathan, who added that union delegates planned to write a collective letter of protest to the ADB president, calling on the regional bank to “walk the talk” and “respect workers’ rights.”

Ironically, the delegates had worn similar headbands during a dialogue meeting held between ADB President Kuroda and other senior ADB officials and representatives of civil society organisations (CSOs) attending the conference on May 2.

Jacques Ferreira, a consultant for environmental CSOs and a former senior ADB staff member, told IPS, “The ADB has come a long way from seeing CSOs as things from another planet, to recognising them as useful partners, but the dialogue with labour groups is relatively new compared to environmental and development organisations.”

“The most important condition for partnership is trust and for that to be effective, each side must speak the same language,” Ferreira said.

Whether ADB management and labour representatives speak the same language remains uncertain even though there is considerable dialogue.

During the May 2 meeting, the trade union delegation raised four issues, including a proposal for the Manila-based development bank to assist trade union federations and include CSOs in the regional Asian financial stabilisation dialogue recently announced by the ADB.

Kuroda replied that ensuring that the ADB financial dialogue and other projects in critical areas such as climate change “be inclusive and well-governed” was “very important” and should take a tripartite form, including finance ministers, central bankers and financial supervisors; but he did not respond directly to the question of whether or how labour unions or CSOs could be involved.

On May 3, union delegates and ADB officials also appeared to talk past each other during a seminar on socially inclusive growth and core labour standards.

“It is very important for us that core labour standards approved by the ADB under its Social Protection Strategy in 2001 should be faithfully complied and observed,” she stated during a seminar on socially inclusive growth on May 3.

According to Geron, the ADB should define an action plan with global targets for its social protection strategy, specify how the bank can contribute to the protection and respect of core labour rights, define how the bank can assist in targeting equality of outcomes and not only equality of access and support the adoption of financial transaction taxes to fund job intensive recoveries.

Geron related that in several power plant projects financed by the ADB, researchers found numerous violations of core labor standards including denial of collective bargaining, harassment of unionists, retrenchements and rehiring of workers at lower wage rates and, in at least one case, the use of bonded labor at power plant projects financed by ADB in India, Indonesia and the Philippines.

“We are raising these issues again and again because there has been no improvement,” related Geron, who cited numerous examples of violations of core labour standards in ADB financed projects.

“Inclusive growth cannot occur without protection and respect for worker rights,” commented Ariel Castro, a senior specialist with the International Labor Office (ILO) based in New Delhi, adding that the ILO supports promotion of employment-intensive investment and green growth initiatives.

But Castro warned that while Asia has been the most dynamic region, “this region has not seen enough jobs and decent work from this growth,” adding that “there has only been an increase of one to two percent in employment expansion in the six to seven percent annual economic growth.”

In response, ADB Deputy Chief Economist Zhuang Juzhong acknowledged that Asia’s high rates of growth had witnessed higher levels of inequality, but also maintained “more growth would lead to more employment” and, in turn, higher wages and a higher income share for labour, which would in turn “reduce inequality.”

In the closing press conference on May 5, Kuroda said “It is unfortunate that some members from civil society organisations could not join the opening session,” but affirmed that the ADB annual meeting is open to CSOs.

Kuroda added that ADB is in close contact with experts on labour market issues and trade union issues through the ILO and did not respond on the question of whether the Bank should establish a specific department for labour issues.

IBON International’s director Antonio Tujan told IPS, “ADB should be responsible for ensuring that the corporations (they deal with) on investment and construction projects abide by these core labour standards but unfortunately this appears not to be the case in practice.”