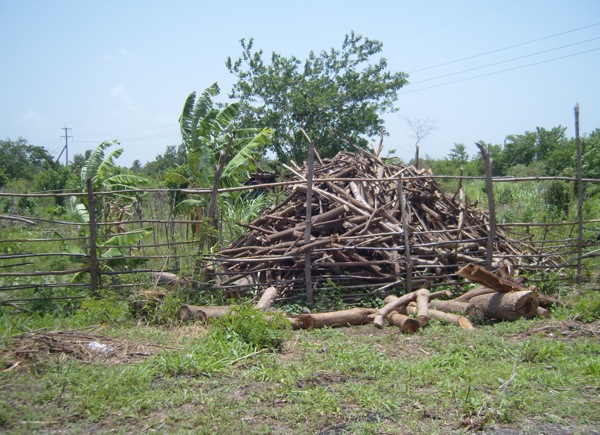 In Jamaica, trees have been cut down to provide wood for cooking or charcoal - just one form of human activity that damages the country's ecosystems. Credit: Zadie Neufville/IPS

KINGSTON, Jun 6 2012 (IPS) - Experts here fear that that the impact of climate change on Jamaica’s fragile ecosystems will worsen the ravages of human activity and destroy the country’s tourism industry.

Tourism is one of the few local sectors that experienced growth even as the global economy declined. In Jamaica, tourism grew some 4.2 percent between 2002 and 2007. It provides close to 2 billion U.S. dollars annually, roughly 50 percent of the island’s foreign exchange earnings and about a quarter of all jobs.

The sector is aware of the challenges it faces, Tina Williams, a director in the ministry of tourism, told IPS. She noted that sea level rise is expected to inundate much of the island’s coastal areas, its infrastructure, hotels and attractions.

More intense rainfall and hurricanes and drier and hotter days are also expected to intensify the pressure on local ecosystems and the tourism industry.

But Williams noted that while the sector is not focused specifically on climate change, stakeholders are implementing disaster risk reduction strategies and programmes that they hope will make their product more resilient.

“Climate change will exacerbate all the vulnerabilities the sector faces – landslides, flooding – and with many small owners who are dependent on local agriculture, the industry will no doubt feel the impact,” Williams, who is responsible for overseeing climate change policy in the ministry, told IPS.

The sector’s dependence on natural ecosystems places it on the frontline of the climate change fight. Yet the industry itself has exacted a heavy toll on the local environment, causing irreversible damage in some areas.

Reports indicate that as much of 30 percent of the island’s original coastal vegetation has been lost. Most of the 1,240 square kilometres of coral reefs, with an estimated 111 species of coral, is mostly dead from a combination of human activities and disease. Of the remaining coral, about 60 percent are at risk, the World Resources Institute noted in a 2010 report.

High levels of nutrients from agricultural run-off and the disposal of sewage in coastal waters have also damaged the reefs. According to government data, the resort towns of Negril, Montego Bay, Ocho Rios and areas along the south coast in the Portland Bight protected area have felt the greatest impact.

Marine biologist Andrew Ross noted that ongoing coral bleaching, overfishing, land clearance and pollution – particularly that of sewage – have all contributed to the decline of reefs.

“Places with regular tourism visitation will see a lot of accidental and/or anchor damage and even some harvesting or collecting for the knickknack shelf,” he said.

But nowhere is the situation more telling than along the Negril coastline. Here, the sand dunes have long given way to concrete houses, hotels and sewage plants. Here, scientists say, the widespread destruction of coastal vegetation, forests and wetlands is providing a glimpse of the ravages climate change is expected to bring.

The true cost of development

Negril’s tourism infrastructure was built at the expense of its coastal wetlands. Coastal mangrove forests and sea grass beds were removed to provide access to the gleaming white sands that tourists love.

Now, the famous white sand that earns roughly half of Jamaica’s tourism earnings is being washed away at rates between a half and one metre per year. According to reports, some areas have lost as much as 55 metres of beach in the last 40 years.

The erosion, scientists from the University of the West Indies (UWI) have found, is the direct result of development. When they removed the wetlands, developers destroyed the carbon-secreting organisms that inhabited the sea grass beds and produced at least half of the sand.

“The significant lack of coral in the beach sand indicate that algal fragments are probably not derived from the reef but rather from algae in the shallow shelf environment of the inner bay,” the 2002 study said.

“Human activities also play a major role” in reef degradation, noted a report from the Risk and Vulnerability Methodology Development Project (RiVAMP) of the United Nation’s Environment Programme (UNEP), even as the report acknowledged that external phenomena were nonetheless important factors.

The report noted that the traditional use of sea grass as compost for farming and its use in traditional drinks have taken away from existing beds. Locals also cut down mangroves to provide fuel wood and as material for housing.

The future of tourism in Jamaica

Even as visitor arrivals are projected to increase to 3.1 million by 2050, climate change could see the numbers fall to 2.7 million by that time, experts have said.

Jamaican tourism is rooted in its white sand beaches and sun and is location-specific to resort towns such as Negril. Much of the island’s infrastructural development has gone into these resort areas, which also happen to lie within predicted flood zones.

Increasingly, the industry is expanding its offerings to include bird watching, community tourism, nature trails and health tourism.

To lessen the impact and repair some of the damage, the island is undertaking a broad-based climate change adaptation and risk reduction programme, replanting hardwood and mangrove forests as well as sea grass beds. One local NGO, with assistance from corporate Jamaica, is building an artificial reef in the Portland Bight area, as well as in Negril.

Williams noted that the tourism ministry is also working with other agencies to sensitise stakeholders.

“We are building formulae that will help us to determine the value of our natural resources whether we want to develop, keep it for future use or just keep it for the satisfaction of having it,” he said.

Mason, who works with the UWI Risk Reduction Centre, noted that the methodologies will provide authorities with the tools to help with decision making that promotes the sustainable use and development of the natural environment.

“It will also aid in the development of alternative employment for the many poor Jamaicans for whom alternative livelihoods must be found if the natural ecosystems are to be preserved and/or sustainably exploited,” Mason said.

Ross, whose company Seascapes Caribbean specialises in the replanting of coral reefs, pointed out that it will take “absolute commitment” to halt the decline of the local environment on which the industry depends.

“We could be talking about a return of the 1970s heyday of us providing the best scuba diving in the world,” he said. “Return of coral also means return of the fisheries and coastal protection, including protection of roads and infrastructure.”