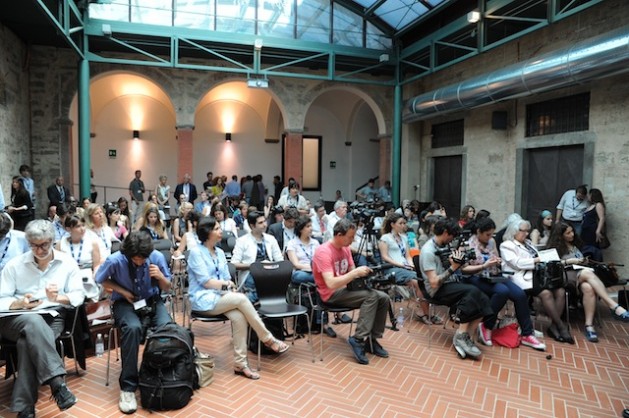 FLORENCE, Jun 20 2012 (IPS) - One and a half years since the beginning of the Arab Spring, activists who guided their fellow citizens through the relatively unchartered terrain of social media activism feel their fight for human rights, democracy and transparency is only just beginning.

Many of the leading social media activists in Tunisia, birthplace of the ongoing wave of revolutions in the Middle East and North Africa, are not satisfied with the results of the uprising and have set their sights on more ambitious goals: transparency in government actions, monitoring of electoral processes and abolition of laws limiting internet freedom.

“We intend to continue to develop this “social engineering,” said Kerim Bouzouita, journalist and activist from  Tunisia, during the Social Media and Human Rights conference organised by the Robert F. Kennedy Centre for Justice and Human Rights in Florence, Italy on Jun. 18-19

“The overthrowing of (former Tunisian President Abidine) Ben Ali’s regime and the achievement of free elections aren’t sufficient. I’m convinced that this is the moment to aim for open data, for access to public records and for open governance. Personally, I think we need to open the archives of the secret police.

“Arrests, torture: we need to investigate these events that characterised the dictatorship and shed light on them. If we don’t reckon with past evils, we cannot face our future,” Bouzouita added.

Tunisia’s ‘Smart Dissidents’ have a very long history , which dates back to 1998, when a group of cyber activists created a mailing list that turned into a website called  Takriz.

In 2001, the activist Riadh Guerfali and other colleagues started to write in Tunezine, the first online platform entirely devoted to human rights issues. Some articles on this website were authored by the current President of Tunisia, Moncef Marzouki, ex-President of the Arab Commission for Human Rights.

“Human Rights Watch and Amnesty International had, in the past, already published some dossiers on human rights violation in Tunisia, but they were characterised by a formal language,” said Bouzouita. “In Tunezine, the articles are written in the Tunisian dialect, in order to create a direct connection, a true closeness with our (netizens),” he added.

In 2004 Guerfali launched Nawaat, a new website for human rights, which succeeded in bypassing stringent censorship laws by utilising proxy servers that act as intermediaries between the client and the server, allowing anonymous surfing.

Tunisia boasts a very advanced community of cyber activists, including two pirate parties inspired by similar parties in Europe that claim to be neither left nor right but “ahead”.

Cyber activists have also been operating in Syria for several years. Ayman Abdel Nour, an engineer and activist from Damascus who was also in Florence for the conference, discussed the origin of his website, ‘All4Syria’, one of the most important tools for dissidents against Bashar al Assad’s regime.

“I began in 2003 with a mailing list composed of 50 addresses: I offered my subscribers translations of all the articles concerning Syria that were censored in our country . After a few months we had 15,000 readers. Now the website is visited by around 50,000 people each day,” he added.

Besides collecting pictures, videos and witnesses, like many other websites, ‘All4Syria’ provides an additional service by obtaining and publishing official records.

“It’s a sort of Syrian Wikileaks,” said Abdel Nour. “There are many people working for the government who cooperate with us by supplying some information. These people would defy the regime, but they are afraid of losing their own life and their family members.”

Amongst the records published since the beginning of the riots in Syria, Abdel Nour singled out “a (government) list of relocations concerning Syrian diplomats (around) the world and a list of Army officers who had been promoted to a superior rank.”

Apart from civil servants, independent websites rely on the cooperation of professional journalists working for media outlets controlled by the regime, who write free articles under an alias. “We often use these people to check activists and citizens’ news for accuracy,” said Abdel Nour, who has been living in exile in Dubai, where he works for the independent Orient  TV channel, since 2007.

“In 2010, I interviewed the main Syrian political opponents living abroad. I felt that anger was breaking out and that soon my people could come up against the regime. I knew it because of the increasing demand for free information, people were thirsty for democracy,” he said.

Speaking about the religious drift of the pro-democracy movement, he explained, “It’s quite normal, these people are angry because Assad’s regime killed their family members; they turn to religion in order to (find) reasons for they struggle; but after the downfall of the regime everything will be different. In Syria there are 17 different ethnic groups and religions. It will be vital to rest upon a shared power system, based on democracy and women’s participation,” he stressed.

Women’s empowerment is already taking root in the neighbouring state of Jordan, supported by the blossoming community of cyber activists.

“In recent years we made significant progress,” Rana Husseini, Jordanian journalist and human rights defender, told IPS. She started writing articles about women murdered by their own family members in honour killings, where the murderers only risked a three-month prison sentence for their crime.

“When I started denouncing the stories of these girls killed by their own fathers, husbands, punished for their “immoral behaviour”, everyone told me I was (wasting) my time because I couldn’t defeat the traditional culture,” Husseini recalled.

“Now that some years have passed, also thanks to the involvement of some members of the Royal Family , the honour law is no longer allowed; a man who kills a woman for these reasons faces anything from a 10-year to a life sentence.”

Husseini thinks this extraordinary result is due not only to her perseverance, but also to support provided by the media, which decided to break a taboo.

“Now there is a Facebook page on which people can denounce women’s rights violations. It is an important step, due to the fact that women’s access to the Internet has risen sharply .”

For participants at the conference in Florence, the conclusion was clear: access to the Internet should be a fundamental human right.