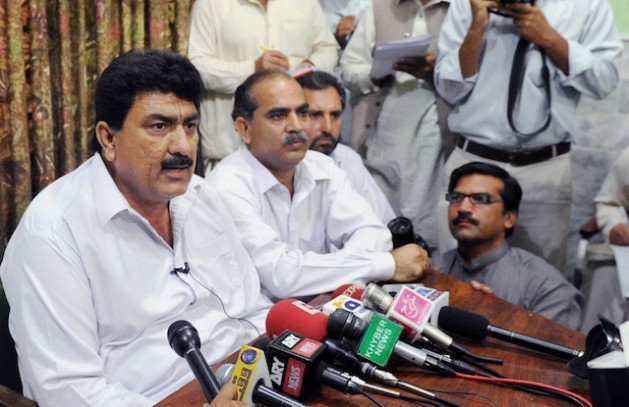 PESHAWAR, Pakistan, Jun 19 2012 (IPS) - Concerns are mounting over the safety of Dr. Shakil Afridi in Peshawar jail. Afridi is alleged to have given information and DNA evidence to the U.S. authorities that led to identification and then the killing of Osama bin Laden.

Authorities in the northern Pakistani Khyber Pakhtunkhwa (KP) province are themselves not confident they can protect Afridi in prison. “We have written to the Punjab government to shift Shakil to Adiala Jail in Rawalpindi but the request was turned down,” Mian Iftikhar Hussain, the KP Information Minister told IPS.

“Shakil will remain in Peshawar prison where security arrangements have been enhanced,” he said. “We can shift him to another jail in KP but presently he will remain here.” He added, “his relatives are satisfied over Shakil’s security in jail.”

Afridi has been given a 33-year prison sentence. The imprisonment is becoming increasingly contentious in the face of U.S. pressure on the Pakistani authorities over his safety, and in the face of growing pressure from his family and civil rights groups in Pakistan.

The appearance of Shakil Afridi’s brother in the media challenging the conviction under the Frontier Crime Regulations has triggered a new debate on the fate of the doctor.

“His case has been mishandled by the authorities in Khyber Agency as Dr. Afridi was not given a chance to tell his side of the story and defend himself,” his elder brother Jamil Afridi told IPS on the telephone.

Dr. Afridi was arrested three weeks after the assassination of Osama Bin Laden in the garrison city Abbottabad, on May 2 last year. Following that he was held incommunicado.

On May 23 this year, Afridi was convicted in Khyber Agency, one of the seven districts of the Federally Administered Tribal Areas (FATA) under sections 121A, 123, 123A and 124 of the Pakistan Penal Code read with Section 11 of the Frontier Crimes Regulation (FCR), for acting against the interests of the state.

On May 30, the Khyber Agency court, in essence a tribal court, declared that Afridi had been convicted for backing terrorism. The Federally Administrated Tribal Areas (FATA) have separate courts from the rest of Pakistan. British rulers promulgated the FCR back in 1901 to check law and order there.

The FCR is in place in seven tribal agencies, including Khyber Agency, where the political agent works as police as well as judge.

The court also ruled that Afridi had helped the banned Lashkar-i-Islamic (LI) a Khyber Agency-based militant group. The court declared that sabotage activities were planned at his office, and that Afridi was instrumental in damaging 60 schools in the agency.

The tribal court alleged that Afridi had been giving financial assistance to LI that was used to fight against the army. Another charge by he FCR Court against the doctor is that he provided treatment to militants who suffered injuries in the fight against army. Afridi worked as Agency surgeon – a top health position in Khyber Agency.

“‘These allegations are rubbish’,” Jamil Afridi, who met Shakil in Peshawar prison, quoted his brother as saying. The doctor reportedly said, “I am innocent and the scale of justice will tip in my favour.”

“I saw my brother. His health condition is bad. But the great fear we have is that he is facing danger in Peshawar jail which is home to dozens of dangerous militants,” Jamil Afridi said, adding they had filed an appeal in the court of the Frontier Crimes Regulation commissioner on Jun. 1.

Samiullah Afridi, one of Dr. Afridi’s five lawyers, who filed the appeal against the sentence, argued that the tribal court had passed an order based on mere surmises and conjectures. He said the order should be dismissed and the appellant acquitted.

“My brother had committed no wrong and is completely innocent,” Jamil told IPS. “He has no links with LI. The members of the Mangal Bagh-led militant group LI never met Shakil as described in the verdict by the FCR court.”

The LI had kidnapped Shakil in 2008. The doctor was released after payment of a million rupees (10,600 dollars) in ransom. The allegations that Dr. Afridi gave financial assistance to this organisation are baseless, Jamil said.

The treatment being meted out to Afridi after his arrest is against fundamental rights, added Jamil, a teacher. The authorities have not provided a copy of the judgment to Dr. Afridi or to his lawyer, he said. “Every accused has the right to have representation in court.”

Afridi’s lawyers told IPS it was a fundamental right of family members to visit him in jail. “We have appealed to Supreme Court Chief Justice Iftikhar Muhammad Chaudhry and to Peshawar High Court Chief Justice Dost Muhammad Khan to take suo motu notice and provide justice to him.”

Jamil said that the vaccination campaign that Dr Afridi ran in Abbottabad to obtain blood samples of bin Laden’s family members had the authorisation of the health department.

“The Khyber Pakhtunkhwa deputy secretary of health and the district health officer had allowed Shakil to carry out the campaign, and the Abbottabad health authorities had provided 20 employees for it,” Jamil said. “My brother did not feel guilty and that was the reason he did not leave the country although he had a U.S. visa.”

Idrees Kamal with the local NGO Amn Tehreek (Peace Movement) told IPS that Afridi should be given a free and fair trial in open court.

“It is the law of the country that every accused should have access to lawyers and family members. But Shakil has been denied this. Only his brother had a 10-minute meeting with Shakil in prison,” he said. “We will continue our efforts to provide justice to Shakil.”

The U.S. has issued a statement saying that it is watching Shakil’s trial and that the allegations that he had been helping militants were being analysed.

The Ansarul Islam (AI), a rival militant group to the LI has demanded the death sentence for Dr. Afrdi. “The 33-year sentence is far less than his crime, therefore he should be awarded stricter punishment to send a message that helping militants is a dangerous act and entails dangerous consequences,” Haji Amir Akbar of AI told IPS.