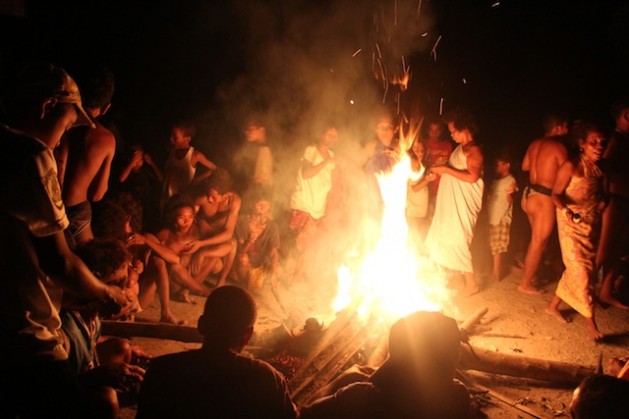 Aetas celebrate around a campfire during the youth festival. Credit: Kara Santos/IPS

TARLAC, Philippines , Jun 7 2012 (IPS) - Barefoot and clad in traditional clothes, over a hundred indigenous Aetas gathered around a bonfire in a community nestled in the mountains of Capas town, in the Philippines’ Tarlac province. They had come together to celebrate their traditions and to instill in youth a sense of pride in their cultural identity.

The festival, dubbed Pamimilamu (the Aeta word for solidarity), was held on May 30-31 in Alunan, an isolated community located one and a half hours away from the Capas town centre. To reach the village, community workers had to travel in a four-wheel drive vehicle across rugged roads and paths that wind through hills still covered with ash from Mount Pinatubo’s massive eruption more than two decades ago.

Many youth delegates had to walk for four to six hours from their own remote villages in the mountains to attend the event.

Despite the long and difficult journey to the site of the event, the Aetas were in a festive mood. Everyone, young and old, broke into a joyful dance as soon as the rhythmic traditional music was played. The music was like a light switch, setting everyone in motion in an instant.

The Aetas are indigenous people who live in scattered, isolated mountainous parts of the Philippines. Unlike most Filipinos who have brown complexions and straight hair, the Aetas have dark skin and curly hair. Nomadic by nature, they once built temporary shelters made of sticks and leaves in the mountains. But when Mount Pinatubo erupted in June 1991, many were forced to move to the lowlands or resettle in outlying communities.

Much has changed in the Aeta lifestyle since that disaster. Closer contact with lowlanders has given birth to a new generation of Aetas who view their traditional culture and lifestyle from the eyes of lowland residents.

“When the Aeta elders and leaders pass away, there’s a danger that our culture and traditions will die along with us. We need to impart our heritage to the younger generations,” tribal council leader Bayani Sumaoang explained.

According to Jane Austria-Young of Kabalikat sa Kaunlaran ng mga Ayta, Inc. (KAKAI), an organisation working to empower the Aeta community, the festival was a way to strengthen cultural pride among the youth.

“We saw that there’s really a need for youth to get more involved in the issues that indigenous people are facing. While the overall theme is solidarity, we also want to reinforce the responsibility of the youth in their fight for their ancestral domain,” Young told IPS.

Like Sumaoang, Young also believes that deeply ingrained Aeta traditions are slowly fading away. Before Mount Pinatubo erupted, gatherings would be regularly held with traditional music and dancing.

“The elders complain that the youth no longer follow certain customs like bowing before a dance is performed or showing respect to their elders. The Aeta language is also fading away. It’s getting mixed with Tagalog and Kapampangan languages, which the younger generations are now using,” said Young.

Integration with lowlanders has altered the behavior of some of the younger generations. According to members of the community, Aetas are often looked down on for being from the mountains or uneducated.

Irene Gutierrez, a resident of the Alunan village, claims some Aeta students feel this discrimination in schools in the lowlands, which has caused some of them to hide their heritage.

“When teachers ask who among the students are Aetas, they don’t want to raise their hands or admit that they come from our community. It’s as if they are ashamed of who they are,” Gutierrez told IPS.

Some now even feel inferior because of the color of their skin, and buy cosmetic products and treatments, which they feel will make them blend in more with lowlanders.

“Some of the youth who are studying in college have their hair rebonded to make it straight. There’s one family whose child studies in the lowlands. The family didn’t have much money but when they did get some, the daughter asked her parents if she could have it as a gift, so that she could have her hair straightened,” Young recalled.

When visiting the houses of some Aeta members of the community, Young would notice “anti-frizz” shampoos and whitening creams among their household goods.

“That’s what they see shown on television and commercials. It’s all whitening creams and hair straightening shampoos.”

Young says that this phenomenon is not just a reflection of the Aetas, but of indigenous people in the whole country. To address this KAKAI has brought in volunteers from an Indigenous Peoples college in Mindanao who are helping to strengthen the role of culture in the lives of the youth.

“Even if they engage in mainstream society, we want them to know their identity and be proud of their culture,” said Young.

The festival aimed to reinforce the strong cultural heritage and identity of the Aetas and give the youth a chance to bond with their own community.

Elders demonstrated traditional skills such as weaving baskets from strips of dried leaves, and shared stories and prayers around the campfire. Short drama presentations depicted how they lived as nomadic tribes in the olden days. They also enacted old courting rituals and performed indigenous dances celebrating hunting and war.

The youth delegates also took part in friendly matches of traditional folk games. A target shooting match with a traditional bow and arrow celebrated their practice of hunting and gathering, a “rice planting” relay where participants had to race to place thin sticks in a row of bottles paid tribute to the hard work of tilling the land, while a mock horse race with hobby horses made of large leaf fronds reinforced solidarity among the youth participants.

Youth delegates from a Dumagat community, a group of Aetas residing in the coastal area of Quezon province in southern Luzon, were invited to take part in the festivities and share their experiences because of their strong background in community organising.

The Dumagat delegation shared inspirational songs crafted by youth to strengthen their role in fighting for their rights, particularly their plight to claim their ancestral domain, and opposing the building of a dam that would affect their traditional livelihood.
Marvin Astoveza of the Dumagat Youth delegation said that youth were naturally creative and could talk about issues through various arts and music.

“The songs and music we shared were composed by young people, and we go around in churches and around the city singing these tunes so that lowlanders will be more aware of the issues we are facing,” said Astoveza.

By the end of the festival, the youth were sharing their reflections on the event and signifying their commitment to fight for their ancestral lands. The festival’s organisers hope that through such events, the Aetas and other indigenous peoples will be able to preserve their identity and culture, even as they become more and more integrated into a Philippine society that is fast modernising.

Alona Manalo, a 21-year-old youth delegate said that the event was able to capture the youth’s interest and foster meaningful involvement.

“I’m very happy that we got a chance to get together with other young people and talk about these issues. The youth really has a role in preserving our indigenous culture,” said Manalo.