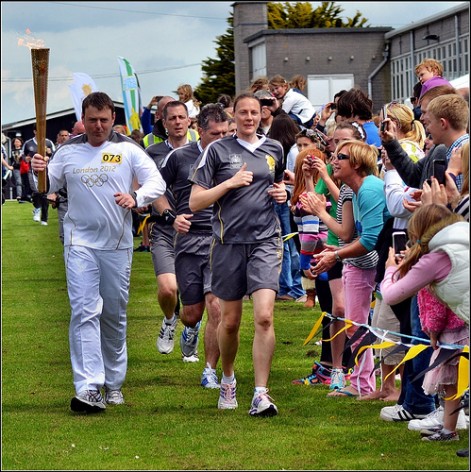 NEW YORK, Jul 21 2012 (IPS) - As the 2012 London Olympics gears up to open on Jul. 27, criticism of the longstanding partnership between the Games and sponsor McDonald’s has stolen a small portion of the limelight.

It’s not only civil society activists protesting the fast food giant this year, but local politicians.

“London won the right to host the 2012 Games with the promise to deliver a legacy of more active, healthier children across the world,” the Green Party’s Jenny Jones, who recently proposed a motion to exclude McDonald’s, Coca-Coca-Cola and others from the Games, told the 25-member Labour-dominated London Assembly.

”Yet the same International Olympic Committee that awarded the games to London persists in maintaining sponsorship deals with the purveyors of high-calorie junk that contributes to the threat of an obesity epidemic.”

The McDonald’s marketing strategy means that investment in sporting education goes hand in hand with the sale of low-priced, high-calorie fast food. In the UK, the company is offering up to 117,000 dollars to local football clubs.

“McDonald’s anticipated the criticism around its junk food 30 to 40 years ago. It spent those decades building a structure and good will to deflect criticism about the health impact of its products,” Sara Deon of Corporate Accountability International told IPS, highlighting McDonald’s sponsorship of the Games as a clear example of this.

McDonald’s has been an official sponsor of the Olympics since 1976. The company recently had its contract extended by the International Olympic Committee (IOC) to 2020.

Coca-Cola has also been a partner of the games since 1926. According to Benjamin Seeley of the International Olympic Committee, the company “sponsors more than 250 physical activity and nutrition education programmes in more than 100 countries”.

The Olympics rely on such commercial partnerships for more than 40 percent of revenues, and McDonald’s and Coca-Cola are two of the leading contributors.

McDonald’s did not respond to repeated requests for comment on the quality of its food in relation to the dietary needs of adults and children, and criticism of its Olympics sponsorship.

However, physicians and nutrition advocates have also expressed concern over both companies as official sponsors, particularly in the context of rising obesity in the UK.

There have been plans to boycott McDonald’s sponsorship of the games by civil society campaigners who deem it unworthy of inheriting the prestige of the Olympics as a supplier of fat, sugar and manipulative marketing initiatives.

Ceci Charles-King, an advocate for food justice, told IPS, “I worry about the message (sponsorship) sends to children and adults. McDonald’s is hydrogen, salt and empty calories. Coca-Cola is sugar, fructose corn syrup and empty calories.”

The Academy of Royal Medical Colleges recently declared that sponsorship by the fast food giant sends the wrong message to people in the UK, which has the most overweight population in Europe with 22 percent of Britons now considered obese.

When a customer goes to the U.S. McDonald’s website to look at the nutritional value associated with “happy meals” for kids, it only shows the calorie, fat and protein intake. The webpage omits saturated fat, salt, vitamin and sugar content and the user must navigate to another section to find the information.

“The food continues to be high in sugar, fat and salt…the so-called healthier options do little for people that are seeking truly healthy options,” Deon told IPS.

Selecting an example from the menu, she said that, “The fruit and maple porridge contains more grammes of sugar than a snickers (candy bar).”

“They are little more than a vehicle to sell its bread and butter products: burgers, chips and fizzy drinks,” she added.

According to Deon, McDonald’s’ investment in programmes to promote physical activity “fall well short of the meaningful change that we need to address the epidemic of diet-related disease and McDonald’s needs to address the core issue of ending its marketing to kids.”

The McDonald’s Olympic restaurant, located in the Athlete’s Village, is the largest in the world, seating up to 1,500 people. It is expected to serve around 14,000 people a day during the Games, and will be offering free Olympic-themed happy meal toys to children.

Asked how children might avoid junk food buoyed by the positive image of the Olympics, Charles-King said it may be as simple as “(showing) the child how to cook so they can make better food choices”.

As far as athletes are concerned, Jill McDonald, UK chief executive of McDonald’s, has commented on the busy location of the restaurant in the Athlete Village, stating that athletes know more than anyone what they should be eating.

Benjamin Seeley told IPS that, “The IOC only enters into partnerships with organisations that work in accordance with the values of the Olympic movement.”

In June, the London Assembly has passed a motion calling for stricter criteria to assess suitable Olympic sponsors. New rules would exclude high-calorie food and beverage producers from sponsorship roles, ending the age-old relationship between McDonald’s and the Olympics.

This year is not the first time that Olympic sponsors have come under scrutiny. In 2008, human rights activists called for a boycott to end sponsorship of McDonald’s and other restaurants.

Food retailers are not the only sponsors to face opposition this year. Indian athletes and officials will be skipping the opening and closing ceremonies to protest Dow Chemical’s involvement with the Games. Dow is the owner of Union Carbide, whose 1984 gas leak in Bhopal, India killed more than 22,000 people and polluted soil and water sources for years to come.