BERLIN, Jul 10 2012 (IPS) - While there is no doubt that global warming is primarily a consequence of human activities, it is also true that there are natural phenomena contributing to climate change as well.

These natural causes include terrestrial events such as volcanic activity, orogenesis, variations in ocean and air currents, and continental drift, which all play a part in raising average global temperatures. 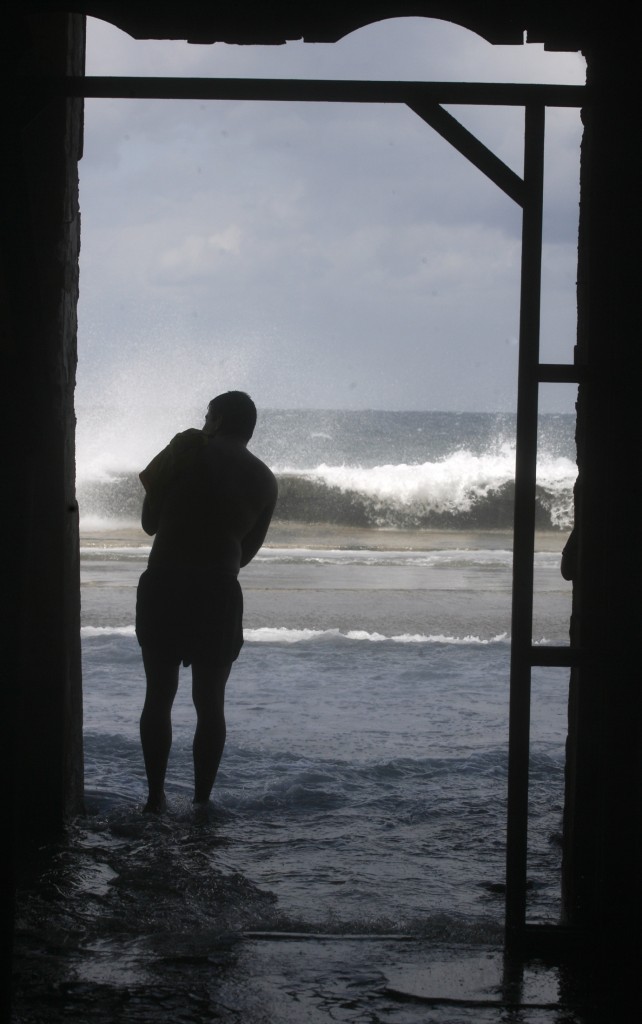 A homeowner stands in the doorway of his house, flooded by a rise in sea level, on the coast of Surgidero de Batabano, Cuba. Credit: Jorge Luis Baños/IPS

There are also extraterrestrial factors, such as variations in the solar constant, which is the total radiation energy received from the sun per unit of time per unit of area.

These causes, particularly solar constant variations, are stressed by those who deny that climate change is an anthropogenic or “man-made” problem and insist that if global warming exists, it is due to natural causes, which means that any environmental policies aimed at mitigating it are doomed to failure.

But some of these phenomena, including solar constant variability, are cyclical, and their effects on the average temperature of the earth’s atmosphere are marginal and cannot explain the changes that take place over long periods, according to Stefan Brönnimann, a professor of climatology at the University of Bern.

“Thanks to satellite observations, we know that the variability of the solar constant during the 11-year sunspot cycle is too small to account for the dimensions of terrestrial climate change,” Brönnimann told Tierramérica *.

The climatologist commented that another natural phenomenon, the circulation of the oceans, also contributes to the movement of heat in the earth’s climate system. “Unfortunately, scientific observation of this circulation is relatively recent, which means it is not possible to formulate reliable predictions of its future effects,” he said.

Correcting this shortage of data on the natural causes of climate change is one of the recommendations of an evaluation report commissioned by the Research Council of Norway, which appointed a committee of international experts to evaluate the climate research conducted to date by scientists in this northern European country.

The evaluation report, released in June in Oslo, observes that less effort has been devoted to studying and explaining the natural causes of climate change because these have been regarded as having a relatively minor impact on the earth’s climate system as compared to anthropogenic causes.

These anthropogenic causes include greenhouse gas emissions from the burning of fossil fuels, industry, deforestation and agriculture.

But the report, “Norwegian Climate Research: An Evaluation”, stresses that a good understanding of the climate system cannot be reached without a dedicated effort to understand the contribution of natural processes to climate change.

Geological history very clearly documents a strong climate forcing associated with solar variability, although the exact mechanism has not been identified, the report notes.

These circumstances should have led to an international effort to study these natural processes, the report continues, “but surprisingly, the worldwide scientific effort to increase our understanding of the natural variations is very limited, and this is most probably related to the limited funding available for basic, not agenda-driven research.”

While the report’s authors do not specify the “agenda” to which they are referring, the wording chosen could be interpreted as an attempt to discredit scientific research on the human causes of climate change, as well as a denunciation of a supposed international refusal to study the natural causes of the phenomenon.

The European scientific sources consulted by Tierramérica did not wish to comment on the report, although they were clearly suprised by its tone and the reference to an alleged research “agenda”.

Norwegian climate researchers are well known and collaborate with their European peers on the Intergovernmental Panel on Climate Change (IPCC).

The evaluation report recognized that Norwegian climate research has been in harmony with the mainstream of international climate science, but recommends “an increased effort” in research on the natural causes of climate change, in particular “the activity variations of the sun, the mechanism of cloud formation, and the multi-decadal variations in ocean current systems.”

Such criticisms appear to ignore the scientific evidence that the amount of solar energy received by the earth since 1750 has remained almost constant. Yet during this same period, and particularly since 1850, coinciding with the Industrial Revolution and the growing use of fossil fuels, there has been a continuous increase in global average temperatures and the concentration of carbon dioxide, methane and other greenhouse gases in the earth’s atmosphere.

Moreover, if global warming were caused by a higher solar constant, the average temperatures in all the layers of the atmosphere would be higher. However, while temperatures in the exosphere and ionosphere are lower today than in the last 150 years, the warming of the troposphere has been extensively documented.

This difference in temperature in the different layers of the atmosphere is a result of the greenhouse effect: gases like carbon dioxide trap the heat of the sun’s rays in the layer closest to the earth’s surface.

This is why, according to Brönnimann, “climate models based on the solar constant cannot reproduce the real increase in the earth’s temperature observed over the last 50 years if they do not take into account the greenhouse gas emissions caused by humans.”