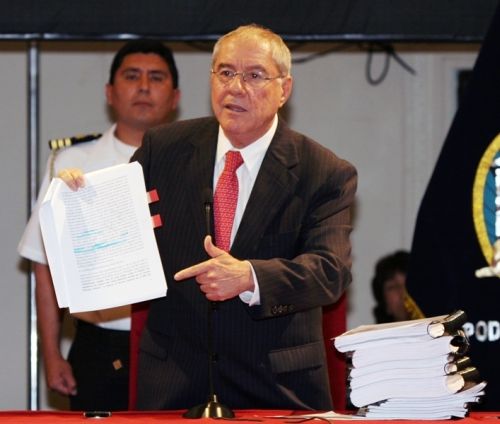 They argued that Fujimori, too, should benefit from the decision, as he was convicted for the same crimes.

Fujimori’s lead counsel César Nakazaki said “elements” in the Court’s ruling on Friday Jul. 21 could contribute to a review of the 25-year prison sentence he is currently serving.

Under presiding Judge Javier Villa, five Supreme Court magistrates determined that members of the Army Intelligence Service’s (SIE) illegal Colina Group, widely described as a death squad, were wrongfully convicted for offences that were not actually crimes against humanity.

Vladimiro Montesinos, Fujimori’s de facto intelligence tsar, and former army commander and Colina Group leader Nicolás Hermoza, now a retired general, who were No. 2 and No. 3, respectively, in the authoritarian Fujimori regime (1990-2000) at the height of the counterinsurgency war, were sentenced to 25-year prison terms in 2010.

Montesinos and Hermoza were convicted of ordering the Colina Group to kill 25 civilians in two separate operations, including 15 people at a barbecue in Lima’s Barrios Altos district in 1991, and 10 students and a professor at La Cantuta university in 1992. They were also found guilty of the murder-disappearance of a journalist, Pedro Yauri, in the city of Huacho to the north of Lima, also in 1992.

At the same trial, retired general Julio Salazar, a former head of the National Intelligence Service (SIN), was sentenced to 35 years in prison for the La Cantuta massacre. Majors Santiago Martín and Carlos Pichilingüe, both leading figures in the Colina Group, were handed 25-year sentences for their roles in the killings.

Other former members of the paramilitary death squad are serving prison sentences of 15 to 20 years.

Now, the Supreme Court in a majority verdict, has decided to lop five years off the sentences of Montesinos, Hermoza and Salazar.

Villa argued that the Colina Group massacres were not “systematic crimes”, and the victims were not “ordinary citizens, but terrorists belonging to Sendero Luminoso (Shining Path),” a Maoist organisation which took up arms in 1980.

However, former head prosecutor Avelino Guillén, who prosecuted Fujimori in 2008-2009 for ordering the Barrios Altos and La Cantuta massacres, told IPS that “it has never been proven that the victims were Shining Path members.”

The fundamental issue here is not the matter of sentence reduction, but the attempted change of classification, from crimes against humanity to straightforward murder (“homicidio calificado”) because, as some of the judges said, the Colina Group was organised to “eliminate terrorists,” not to commit indiscriminate murders of civilians.

On Apr. 7, 2009 Fujimori was found guilty on charges of human rights violations and sentenced to a 25-year prison term for having command responsibility for the homicides in Barrios Altos and La Cantuta, and for the 1992 abductions of journalist Gustavo Gorriti and businessman Samuel Dyer, critics of his regime.

The judges at his trial, presided over by César San Martín, determined these crimes met the criteria for crimes against humanity.

Rightwing lawmaker Kenyi Fujimori, the son of the former president, whose sister, Keiko Fujimori, was a presidential candidate in the 2011 elections won by President Ollanta Humala, said at a press conference that the Jul. 21 court ruling “shows that my father is innocent of crimes against humanity, and so we will be taking legal action to change the sentence imposed on him.”

Nakazaki took a similar line and announced he would ask for a review of his client’s sentence. “The members of the Colina Group were not originally accused of crimes against humanity, and neither was Fujimori, which affected their rights as defendants,” he said. “Fujimori was convicted for a crime he did not have the opportunity to defend himself against. This anomaly needs to be corrected.”

In any event, neither Fujimori nor his former chief adviser Montesinos will find it easy to get out of jail in spite of the breach apparently opened up by the Supreme Court.

The former president was convicted in 2007 for usurpation of powers and abuse of authority and sentenced to eight years’ imprisonment; and later in 2009 he was found guilty of theft of public property and misappropriation of funds, bringing with it another seven-and-a-half year sentence.

Montesinos, for his part, is presently serving a 15-year sentence following conviction on several counts of corruption, and a 20-year sentence for facilitating arms trafficking with the Revolutionary Armed Forces of Colombia (FARC) guerrillas.

While Fujimori’s legal team considers whether and how to request a review of his sentence, Víctor García, former president of the Constitutional Court (2005-2006), said Fujimori’s sentence for the Barrios Altos and La Cantuta massacres is final and cannot be appealed.

“The Supreme Court verdict is not binding and may be changed,” García told IPS, adding that “the six-month window of opportunity to appeal or impugn the verdict against Fujimori is past and gone.”

He also stated that “The Inter-American Court of Human Rights determined the Barrios Altos and La Cantuta murders to be crimes against humanity, and it reserves the right to verify that the Peruvian justice system imposes sentences in accord” with the requirements of international law, he said.

Meanwhile the Justice Ministry presented an appeal against the Supreme Court ruling in the High Court on Tuesday, in a move criticised by human rights lawyer Tania Quiroz, who has defended military personnel accused of human rights abuses.

“The Court was mistaken to throw out the concept of crimes against humanity and reduce the sentences. What it should have done was to annul the trial and order a new one from scratch. But this is a legal rather than a political issue,” Quiroz told IPS.

For her part, Jo-Marie Burt, a political science researcher and professor at the George Mason University in Fairfax, Virginia, said the Supreme Court decision was not an isolated case but reflected a trend within the Peruvian justice system towards favouring former state agents who have been found guilty of violating human rights.

“At least half the accused (in cases of this kind) have walked scot-free. It is a very dangerous trend because it opens the door to impunity,” Burt, with the Washington Office on Latin America (WOLA), told IPS.