UNITED NATIONS, Jul 28 2012 (IPS) - Secretary-General Ban Ki-moon, a former foreign minister of South Korea, is visibly emotional whenever he speaks about the striking political and economic achievements in his home country. 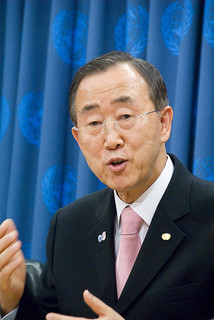 The secretary-general will be at the closing ceremonies of one of the biggest events in Korea this year: the international exhibition Expo 2012 in the coastal town of Yeosu. Credit: Bomoon Lee/IPS

In an interview with IPS, just after he was re-elected the world body’s chief administrative officer for a second five-year term last January, he said there has been some criticism as to whether he was more inclined towards “Western values”.

“But the values are the same,” he said, “whether they were eastern, western, north or south. And when it comes to human rights, there is no difference.

“I have lived in such circumstances and I have seen how Korean democracy evolved” – from authoritarian regimes and military dictatorships to a full-fledged democracy.

“The poverty was terrible,” he said, recounting the days when Korea was still recovering from war in the late 1950s.

Now, several decades later, a democratic South Korea is one of the world’s fastest growing economies, with symbolic Samsung smart phones outselling Apple I-phones, with a 35-percent to 18-percent share of the world market.

With education and elbow grease, he said, Korea transformed itself – all but destroyed by war and almost totally dependent on outside aid – to be a “proud donor”.

Korea is a case study in how countries can re-write their own history – by investing in people.

Come Aug. 12, the secretary-general will be at the closing ceremonies of one of the biggest events in Korea this year: the international exhibition Expo 2012 in the coastal town of Yeosu.

The United Nations is playing a key role in Expo, whose primary theme is the protection of the world’s oceans and the maritime ecosystems.

On International Day for Biological Diversity last May, Ban warned that marine biodiversity has not fared well in human hands.

“Commercial overexploitation of the world’s fish stocks is severe,” he said. “Many species have been hunted to fractions of their original population. And more than half of global fisheries are exhausted, and a further third are depleted.”

In advance of his visit, Ban said Yeosu Expo highlights “the invaluable services provided by oceans and coasts – from the food we eat to the oxygen we breathe”.

“I hope all who visit the U.N. Pavilion will come to feel more connected with these indispensable ecosystems – and with the United Nations, too.

“Let us work together – in Yeosu and around the world – to build the future we want,” he said, recalling the global plan of action adopted by world leaders at the U.N. Conference on Sustainable Development at Rio de Janeiro last month.

Meanwhile, speaking at the University of Luxembourg last April, Ban went on a nostalgic ride down memory lane – as he does, off and on.

“I come from a very small town in rural Korea. Much of it had been destroyed in the war. We did not have any modern appliances. We used the stove to heat our house. I studied by candlelight. My classes were held under a tree, out in the open,” he told the university audience.

“Thanks to that education and thanks to the many friends from around the world who came to help Korea in its time of need, I began to see beyond my country.”

He said: “I knew that by learning a different language I could enter a broader world.”

So, he entered an English essay contest and won. The prize: a trip to the United States.

“It was a life-changing experience; from the dirt roads leading out of my hometown, I went to the capital, Seoul. Then I got on an airplane, for the first time.

“I was so thrilled, I felt like I could grab the stars right out of the sky,” he recalled.

And the rest, as they say, is history.