COLOMBO, Aug 20 2012 (IPS) - The simple sentences six-year-old Minadi writes on paper should delight her mother. Instead, Vilasini Wakwella despairs over their content. 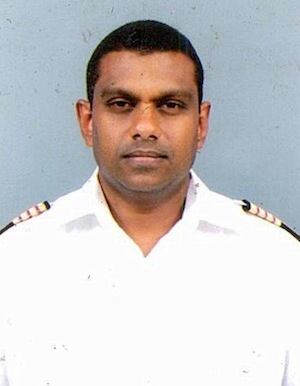 Nalindre Wakwella has been held by Somali pirates for close to two years, without any sign of release. Credit: Wakwella family and Amantha Perera/IPS

“Thaththi Enna” the little girl writes, a short but painful message: “Daddy, come home”. Little Minadi has not had her father near her for almost one third of her life. Nalindre Wakwella has been held hostage by Somali pirates since Nov. 26, 2010.

“She does not talk much about him. I also don’t discuss his situation with her, but I know that she feels his absence a lot,” the mother told IPS. Sometimes Minadi writes the date of her birthday alongside these notes to her father, hoping he will return in time to celebrate with her.

Sriyani Perera is similarly distraught when she talks of her husband, Chandrasiri Perera, one of Wakwella’s fellow crewmembers who was also taken hostage. Her son, Danura, is much older than Minadi, but he is no less traumatised by the situation. At 17, he is getting ready to sit for the London Advanced Level exam in 2013.

“He is very anxious, he knows the situation we are in,” the mother told IPS.

The two families are not alone in their distress. Five more Sri Lankans are currently being held hostage by Somali warlords. Four are crewmembers from the vessel MV Albedo, on which Wakwella and Perera worked, while the other is from a different ship.

The hostage saga began for the Wakwella family  on Nov. 28, 2010. His wife received a phone call out of the blue informing her that her husband’s ship had been hijacked and the crew now held for ransom.

Nalindre Wakwella was on a routine assignment as the chief engineer of the Albedo, traveling between Dubai and Nairobi. The experienced seaman had hoped his assignment would be a short one, so that he could quickly return to his young daughter.

Perera’s family, on the other hand, did not even get the courtesy of a phone call. His wife Sriyani was watching TV when, to her horror, the newscaster began to report on the Sri Lankan vessel being hijacked. The vague details were enough for her to call the local agent who confirmed her worst fears.

Since then the families have been making every effort to get the crew released. When they first approached the local agents they were given encouraging news: that the ship and its crew were likely to be released as soon as the owner paid the ransom, which was initially as high as 10 million dollars.

“We were naïve, we just believed their word that everything would be ok,” Sriyani Perera told IPS. As days stretched into months with no breakthrough, desperate family members approached government authorities.

The message they got was the same – not to worry, the crew will be released soon.

But the Ministry of Foreign Affairs in Colombo gave indications from the beginning that it was sometimes clueless as to what to do. Soon after the hijacking, family members received a hand-written letter from the ministry providing a telephone number to call for information on the sailors held for ransom.

But when the number was called some family members were stunned to find out that the official on the other end was not even aware of the incident.

On another occasion, after a family member contacted the Office of the President, families received yet another round of calls from the Ministry of Foreign Affairs seeking information. Later, they were bewildered when a letter came from the ministry detailing the same information that they themselves had provided as the latest status report.

“We have been getting the same refrain, that they are working on it,” Vilasini Wakwella said.

A ray of hope came when the families of Pakistani hostages among the crew, including captain Jawaid Khan, launched a public appeal to raise funds. The ship’s owner,  reportedly a Malaysian citizen of Iranian descent, had indicated a willingness to pay half the demanded amount. The Sri Lankans were given the impression that they too would be released if the deal went through.

It did, but much to the disbelief of the Sri Lankans, only the seven Pakistanis were released after a payment of one million dollars was made to the pirates, according to Pakistani media. The Pakistanis arrived back home on Aug. 2 and the Sri Lankans were informed that the owner had subsequently backed off from the deal.

“Something fell thorough somewhere, we don’t know what it was,” Jayan Panduka, Wakwella’s brother, told IPS. The families have now run into a wall trying to open communications with the owner who has refused to deal with anyone but Malaysian authorities.

In between the failed attempts to secure their release, crewmembers have contacted their families intermittently.

Wakwella calls home once every three months or so since he first contacted the family about three months after the hijacking. But the calls leave the family more nervous than before. “He does not say much, but I know that he is very anxious,” his wife said.

The released Pakistanis told Wakwella’s family that he had lost about 25 kilos in weight and suffered a finger injury.

With all other efforts falling flat, Sri Lankan families have now decided to take the same path that secured the release of the Pakistanis – the launch of a public appeal.

They have formed an organisation that includes all seven families of the hostages. They plan to seek the assistance of religious leaders, civic groups and others  to raise money and awareness.

Their aim is to secure their families’ release through a ‘private negotiator’, the same route the Pakistanis used to secure their freedom. Wakwella’s brother Panduka told IPS that because the families had placed so much hope on official measures they had not taken up the invitation by the Pakistani families to join the fund raising.

The campaign is still in its infancy and it is yet unclear if it can garner public support. Till it does, little Minadi’s long wait to see her beloved father will continue.