Back Home With Help and Hope 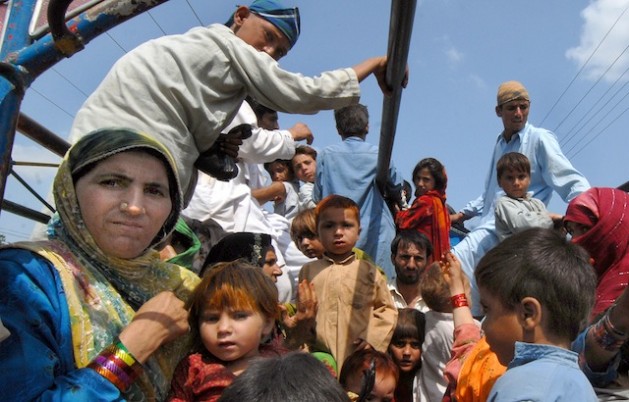 PESHAWAR, Pakistan , Aug 10 2012 (IPS) - Thousands who fled their homes in the Taliban-led violence over the past three years have now returned to rebuild their lives, and their homes.

These residents of the Federally Administered Tribal Areas (FATA) thank their luck, and the government for the grants they are getting.

“My house was already in bad shape when we left it three years ago due to Taliban’s violence. Now, we are able to build a good house,” Faqir Jan, a fruit seller in Charmang in Bajaur Agency in the FATA region tells IPS.

Faqir has received 400,000 rupees (4,300 dollars) to rebuild his damaged house. That sufficed, he says, but he would now need financial assistance to restart his business.

United Nations Refugee Agency (UNHCR) spokesman Taimur Ahmed Shah says that so far 2,336 displaced families have been repatriated to areas where militancy has been quelled and where peace now prevails.

“Since January this year, 655 families have returned to Bajaur, the highest number of repatriated families to any of the FATA agency,” he tells IPS.

The UN refugee agency supports the documentation and registration process, and provides transportation for returning families, he says. The families also receive items such as a kitchen set, water buckets, tea sets and tents.

“We give them wheat flour, biscuits, cooking oil, pulses and sugar for six months. Besides, they are given quilts and pillows etc.,” WFP’s Mehboob Khan tells IPS. The returning IDPs receive both the food and the non-food items as soon as they reach their native villages, he says.

The WFP says that since January 2012, donors have contributed more than 113 million dollars in the humanitarian response to the emergency. But more funding is needed, and has been sought.

Ahmad Hussain at the FATA secretariat says that about 600 houses had been rebuilt by the Norwegian Refugees Council, half of which have been handed over to people whose houses had been destroyed in the war. “We are waiting for more IDPs to return and get keys for the remaining 300 houses.

“We are also trying to rebuild the houses of displaced persons from Mohmand Agency. So far 563 families (3,326 individuals) have returned to Mohmand. They are staying in tents or with relatives.”

Life in refugee camps was hellish, says Abdul Wali, who fled the violence in Lakaro area in Mohmand. “Homecoming is always a great joy.” He says he has enough money to repair his home.

Growing militancy scattered the residents of FATA. According to UNCHR, of the total of 687,550 displaced people, 147,329 lived in camps and the rest in host communities with relatives or in rented houses.

The UNHCR is spending 47 percent of its Pakistan budget on the displaced persons in FATA. The rest is being being used for flood victims in Sindh, Punjab and Khyber Pakhtunkhwa.

The majority of displaced persons now want to be repatriated as soon as possible. A UN rapid assessment survey in April showed that most displaced persons are living in rented accommodation because camps are difficult.

Humanitarian agencies now need additional funds to assist people displaced recently from Khyber Agency. With the increasing number of IDPs, agencies may run out of funds this year.

Political Agent for Bajaur, Islamzeb Khan, says return home transforms lives. About half of the people returning have already been paid compensation.

“The returning population is happy because they had been out of their natives villages for so long,” Khan tells IPS. “It is also a reunion for the displaced persons because they left their native villages and lived in different places during their stay outside the agency.”