PESHAWAR, Nov 2 2011 (IPS) - Pakistani pilgrims travelling to Mecca for the current Haj season have one prayer on their lips – to be delivered from the terror that the Taliban have unleashed on their country. 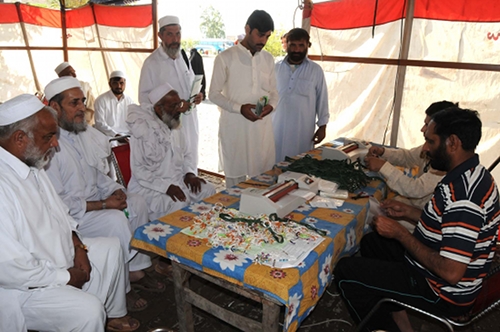 Pilgrims preparing for Haj at a centre in Peshawar. Credit: Ashfaq Yusufzai/IPS.

“There is no way to end this problem except to pray sincerely in sacred places during Haj to get rid of terrorism and prevalence of peace,” said Gulifullah Khan, 60, a resident of Mardan, one of the 25 districts of the embattled Khyber Pakhtunkhwa province.

About 179,000 Pakistani pilgrims will go to Mecca this year and join millions of the faithful from around the world for the annual ritual which culminates in the festival of Eid-al-Adha on Nov. 6. ” Often the faithful seek the blessings of Allah during Haj, but this time the majority of them want to seek divine intervention against unending terrorism at home,” said Ajmal Khan, a tour operator.

Khan said many of his clients were fed up with militancy in Pakistan, especially in the Federally Administered Tribal Areas (FATA) and the Khyber Pakhtunkhwa on the turbulent border with Afghanistan.

“The 50,000 of the pilgrims from the FATA and Khyber Pakhtunkhwa are among the worst victims of terrorism,” said Gul Jabbar, a local leader of the political Jamaat Islami Party in North Waziristan agency in the FATA.

“Our mosques, marketplaces, musical parties, CD shops have been attacked. Even funeral ceremonies are not spared,” Jabbar said. “It is our responsibly to offer special prayers in the Holy city of Mecca to end this violence.”

“All the pilgrims are sure that their prayers will be answered by God and that peace will ultimately return to their homeland,” Khan told IPS.

Muhammad Wahid, a grain dealer from South Waziristan, also in the FATA, has little recourse but prayer after losing his flourishing business. “I also lost two of my brothers and a son to stray bullets,” said Wahid, now resettled in the adjacent Bannu district.

The 55-year-old says he first performed Haj to fulfill a religious obligation on all rich Muslims at least once. This second pilgrimage is to “bow before God and plead for an end to the terrorism that has displaced five million of the FATA’s eight million people.”

The Taliban are not pleased with this attempt and have reacted, predictably, by issuing dire threats.

Shakil Ahmed Seth, a director in charge of the Haj, confirmed that his office has been receiving threats. “We have received warnings from the Taliban that they would sabotage the Haj proceedings. We have made elaborate arrangements for the security of the Haj pilgrims,” Seth told IPS.

As part of the arrangements the pilgrims are screened and sequestered at well-guarded ‘Haj complexes’ before they are bused to the airport.

“Every bus is escorted by police vehicles to ensure that the pilgrims get to the airports safely,” Seth said, adding that the same procedure was being followed across the country.

Afsar Khan, a police officer at the Haj Complex, told IPS that there were fears that the “Taliban can enter the camp or the airport in the guise of Hujaj (pilgrims) and create trouble.

“We have taken tough measures, which includes body search of the all the people and thorough screening of luggage before admission into the complex,” he said.

By Oct. 31, there were 438 Haj flights to Jeddah airport in Saudi Arabia. The return flights will commence from Nov. 11.

Local preachers who offer guidance to the Haj pilgrims on the rituals in Saudi Arabia enjoin their congregations to pray for peace and for the continued integrity of Pakistan.

“My responsibly is to provide guidance to people going to Saudi Arabia. I deliver at least 10 sermons everyday wherein I ask them to pray for the integrity and solidarity of Pakistan while in Mecca,” Maulana (preacher) Noor Mohammad said.

“Allah accepts all the prayers during Haj. And the people’s wish for an end to terrorism will be fulfilled,” said Muhammad confidently.

The maulana told IPS that his flocks were concerned about lawlessness and request him to make mention of it in his sermons.

Sher Zaman, a resident of the violence-wracked Bajaur Agency, said the Taliban have brought a bad name to the entire Muslim ummah (community).

“Taliban killed women, children and innocent people which is against Islam. Killing of even one person amounts to killing the whole humanity.”

Zaman said the elders his village had specifically requested to pray for the elimination of militants because they considered it to be of utmost priority.

Earlier, people from Pakistan went to perform Haj, the largest congregation in the world, to bow before Allah and seek forgiveness for their sins, Zaman said. “Now we have to pray for deliverance from the Taliban.”