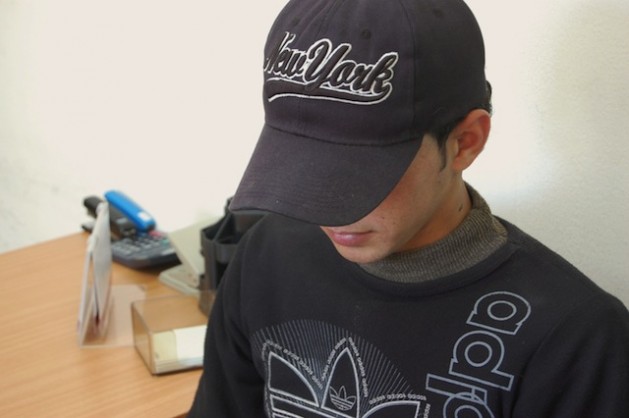 Hamza, 17, who was arrested after allegedly throwing stones at Israeli soldiers, hides his face frm the camera. Credit: Jillian Kestler-D'Amours/IPS.

JERUSALEM, Aug 26 2012 (IPS) - In a hamlet of the occupied West Bank, the testimony goes, Israeli troops chase a Palestinian child. “He was about two metres away – the company commander cocked his weapon in his face…The kid fell on the ground, crying and begging for his life.”

“It was this kind of gray situation, not that terrible,” the Israeli sergeant’s report continues. “Because those kids really do throw stones and that’s risky – it’s not like we actually meant to harm them. I suppose it’s a very scarring experience for them, but the situation is complicated.”

The year is 2007. The sergeant’s account is one of 47 testimonies collected from over 30 Israeli soldiers who served in the occupied Palestinian territories in 2005-2011.

Entitled ‘Children and Youth – Soldiers’ Testimonies 2005-2011’, a 71-page booklet has just been released for distribution by the group ‘Breaking the Silence’.

The NGO founded in 2004 by Israeli veterans of the Second Palestinian Intifadah uprising (2000-2005) is dedicated to documenting daily life under military rule in the Palestinian Territories through soldiers’ experiences during their routine round of duty.

In order to sensitise Israeli 12-graders who, next year, will be drafted in the army, the NGO plans to distribute copies of the report at the gates of Jerusalem and Tel Aviv high schools. The school year started last Monday.

“Israeli children enjoy the protection of the U.N. Convention on the Rights of the Child, to which Israel is signatory, whereas Palestinian children grow up without protection,” says the brochure’s preface.

“That specific kid, who actually lay there on the ground, begging for his life, was actually nine years old,” the sergeant notes in his testimony. “I think of our nine-year-old kids (…) – a kid has to beg for his life? A loaded gun is pointed at him and he has to plead for mercy?

“But if we hadn’t entered the village, then stones would be thrown the next day and perhaps someone would be wounded or killed.”

“No,” is the laconic admission.

The events described in the booklet took place as a calm security situation prevailed, after the Intifadah subsided. Yet, the testimonies show that racism, abuse, violence, wounding and killing by targeted shooting, even if “unintentional”, of Palestinian children and teenagers continues unabated.

And, Palestinian children are old enough, so it seems, to be arrested at gunpoint, harassed and humiliated, beaten “to a pulp”, used as “human shields” against other Palestinians – this, despite an Israeli Supreme Court ruling from 2002.

“At first, you point your gun at some five-year-old kid, and feel bad – saying, it’s not right,” another soldier testifies. “But that changes when you go into the village and they throw stones at you.”

During another incident mentioned in the report, a company commander catches a 12-year-old boy, forces him to get down on his knees, yells threats at him “like a madman” in order to intimidate other youth who’d threw stones at the troops.

“The kid cried, peed his pants. (…) It was like something out of a Vietnam movie,” recounts the soldier. “I knew it was just a hollow threat – the guy’s an officer, after all, and I don’t think an officer would do anything, but…”

Eventually, a village elder persuaded the commander to free the boy. The next day, two Molotov cocktails were hurled at vehicles driving nearby.

“So we didn’t really do our job,” the soldier concludes his testimony. “And you wonder what that job really is.”

Most Israeli youth are educated in a system – be it family or school – that, although praising its intrinsic moral values, seldom questions the army’s operational routine and the moral toll it exerts on its soldiers.

The army has said this report is one-sided, arguing that the NGO failed to submit to it its material, thus rendering a military probe into cases of human rights infringement, not to say crimes, impossible.

“The organisation’s refusal to turn to the authorities indicates its true motives – to generate negative publicity for the Israeli army and its soldiers,” a military spokesperson stated.

Activists refute the incitement charge, stressing that they support army service but, at the same time, share the conviction that students must be informed ahead of military service.

Since its creation, ‘Breaking the Silence’ has collected testimonies from more than 800 soldiers. “We’re a society that nurtures family and educational values, but the army treats Palestinian children differently,” says executive director Dana Golan. “Each testimony features stories about the maltreatment of children; each such story is a kick in the gut.”

Golan is aware that some teens will ignore the brochure, but were they to read just one story, the NGO’s goal would be served.

“The main purpose of ‘Breaking the Silence’ is to arouse public discussion of the moral price that Israeli society pays for a reality in which young soldiers face a civilian population and dominate it on a daily basis,” states the report’s foreword.

But moral debates are aplenty within Israeli society. Just ten days ago in downtown Jerusalem, three Palestinian teenagers were almost lynched by a crowd of 13- to 19-year-old Israelis. The incident unleashed much breast-beating and condemnation.

Yet, no one entertains the illusion that such collective mea-culpa will end the abuses of the occupation. After all, most Israelis are still convinced that they hold the moral high ground vis-à-vis their Palestinian neighbours even though, to paraphrase the saying, their good intentions pave the road to hell, not to future peace.