Mexico May Be on Verge of Rolling Back Military Jurisdiction 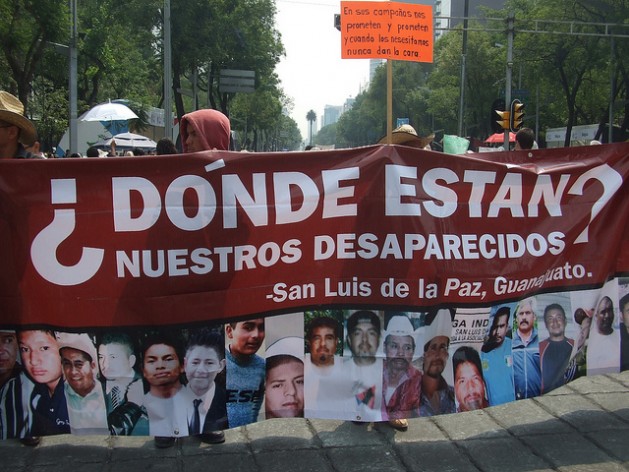 “Where are they?” ask mothers looking for their missing sons and daughters, after driving 2,000 km to Mexico City. Credit: Daniela Pastrana/IPS

“In the past few days, the Supreme Court has adopted two important decisions and is now debating a third one … ruling that two specific cases of alleged violations of human rights perpetrated by the armed forces have to be taken to the ordinary system of criminal justice,” Alejandro Anaya, a noted rights campaigner and academic coordinator for the Center for Research and Teaching in Economics in Augacalientes, Mexico, said at a discussion here on Thursday.

“This is an important breakthrough. Reform now seems more likely than it did just two or three months ago.”

Under Mexican law, the Supreme Court must rule on five cases to set legal precedent. On Aug. 10 and 14, the court ruled on two cases related to the jurisdiction of military courts, while a third was slated for Thursday.

“The effectiveness of the government, of a state, cannot be at odds with human rights. The authorities have an obligation to be effective with full respect for human rights,” Justice Arturo Zaldívar Lelo de Larrea told CNN this week.

While the court made an initial stand on the issue in mid-2011, prompting President Felipe Calderon to promise that all current cases of alleged military abuse against civilians would be transferred to civilian courts, the government has yet to move on the issue.

Now, with some two and a half dozen cases currently pending before the court on the issue of military jurisdiction in cases of human rights violations, and with the judges apparently inclined to continue the recent trend, the definitive number of decisions could be reached in the coming days.

“It’s going in that direction and we all hope that, maybe this week or maybe next week, that amount of cases will be decided to make it a rule to prohibit military jurisdiction in human rights violations,” Santiago A. Canton, former executive secretary of the Inter-American Commission for Human Rights (OAS) and currently director of RFK Partners for Human Rights, based here in Washington, said Thursday.

The issue has enraged Mexicans and international activists since 2006, when President Calderon made fighting the country’s organised crime – primarily drug cartels – a top priority of his new administration. Calderon’s plan relied on sending tens of thousands of soldiers into battle throughout the country, including around 50,000 at the end of 2011.

That year, the Mexican army had the largest number of public allegations of abuse of any institution in the country.

Tens of thousands have been killed in the fighting between the government military and drugs cartels, with an unknown number of civilians having been caught in the crossfire. According to Human Rights Watch, Mexico saw a 260 percent spike in its homicide rate between 2007 and 2010 alone, after a falling trend over the previous two decades.

The Caravan for Peace and Justice, a pro-peace group of Mexican parents and activists currently travelling through the United States led by poet Javier Sicilia, puts the number of those killed since 2006 at around 60,000, a figure quoted by several groups. The caravan also suggests that 10,000 people have been “disappeared”.

While the Mexican Human Rights Commission has documented a fivefold increase in complaints against the military and federal police since 2006, throughout that time the Mexican military has maintained the sole right to investigate – and, potentially, prosecute – those allegations.

According to Canton, this is in keeping with a longstanding historical tradition.

“Like many of the norms and institutions in Latin America’s countries, military justice is an inheritance of the Spanish Monarchy of the (18th) century, which sought to protect its army from the consequences of its wars abroad,” Canton wrote in an article published Wednesday.

“Throughout the (20th) century, with the enormous power of the armed forces in Latin America, military justice was strengthened and used to guarantee impunity for human rights violations … the democratization of Military Justice is one of the reforms that has faced the greatest obstacles.”

Perhaps in part because Mexican military judges operate at the discretion of the secretary of defence, of the nearly 5,000 probes into alleged human rights abuses by members of the military against civilians between 2007 and April 2012, the Defence Ministry reports that just 38 personnel have been sentenced.

Further, the Mexican Human Rights Commission recently noted that of those allegations documented in 2010 and 2011, no member of the police or military was sanctioned, an indication of the levels of impunity that, according to many activists, have allowed this trend of increasing violations to continue.

Indeed, according to Maureen Meyer, with the Washington Office on Latin America, a watchdog group based here, Mexico’s organised crime has “served as an excuse by the Mexican government to not investigate cases” of any kind related to the drugs war.

“Some 95 percent of all homicides aren’t effectively investigated, so you’re not even sure who’s involved or who’s responsible for most of these acts,” she said here on Thursday.

According to repeated statements by President Calderon in recent years, the Mexican state views 90 percent of those killed since 2006 as “criminals”. And following July presidential elections and the victory of Enrique Peña Nieto, it is unclear how the official view will change.

A new report from the Trans-Border Institute, based in California, notes: “After … Enrique Peña Nieto was declared the victor … he affirmed the continued role of the military in domestic security operations.”

However, the report also states that Peña Nieto has promised to uphold the rights of Mexican citizens “first of all, through the real, objective application of (human rights) protocols to agencies that are dedicated to public security.”

Over the past half-decade, the Mexican government has been repeatedly targeted by rights groups, both national and international, for allowing its military to continue to maintain jurisdiction over investigations into human rights violations surrounding the drugs war violence. According to many analysts, government officials have been – and remain – simply too afraid to upset the country’s powerful military.

Alejandro Anaya says that the Supreme Court’s recent actions now need to serve as a learning opportunity for activists whose efforts on this issue may have been slightly misdirected, having typically targeted the executive powers.

“International human rights pressure has pushed President Calderon towards at least pretending to support reform,” he says. “But the more important changes in this respect seem to be coming from the national Supreme Court – not the government that feels the pressure from above.”