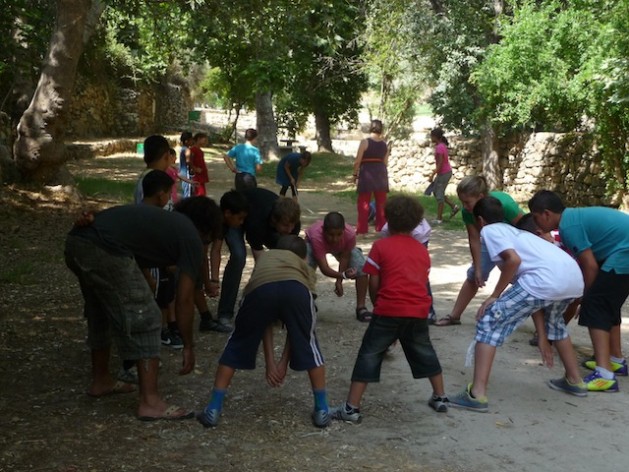 JERUSALEM, Aug 29 2012 (IPS) - On a sunny summer afternoon, kids start arriving with their parents at a park near Ein Rafa, a Palestinian village in the south of Jerusalem. The Arabic speaking kids stay in one cluster at first, and the Hebrew speaking kids chat among themselves. Soon a ball appears, and before long all the kids intermingle in a fast-paced game of Chinese football.

The adults begin to spread blankets on the ground, and set out the food they brought with them. It’s looking to be a promising picnic, with games, food and fellowship.

Pupils from participating schools meet for common activities several times a year as part of a joint Jewish-Palestinian intercultural school programme launched by The Centre for Creativity in Education and Cultural Heritage (CCECH), a non-profit-making organisation based in Jerusalem.

Ahmed Barhum, 26, is one of the adults present on the occasion, a celebratory get-together for another successful year. Barhum was once a pupil, and is currently a facilitator in this school programme.

“Being a part of this has touched every aspect of my life,” says Barhum. “Thanks to folklore, games and other things, we can get to know each other’s cultures, and that is precious.”

For Simon Lichman, founder and director of the programme, people like Ahmed keep him going. “Seeing Ahmed and other alumni of the programme come back and become part of our team, investing time and energy in something they believe in, is thrilling.”

Dr. Lichman, a British-born resident of Jerusalem, founded CCECH and the school outreach programme in 1991. Since then, he has been running it together with his partner Rivanna Miller, and with other dedicated staff of both Arab and Jewish backgrounds.

The scope of the programme is simple: Arab and Jewish schools from both west and east Jerusalem (all within the jurisdiction of the Education Department of the Jerusalem Municipality) are paired up and work towards creating long-term relationships. Pupils in fourth through sixth grades participate for at least two years with the same pairs of classes meeting each time in a series of joint activities.

Each class has one lesson a week built into their school curriculum. They meet together with the other schools every few months.

The programme includes traditional play and traditional food. But everyone also shares talk of traditions in religion, and family stories, besides the song and dance. Pupils interview parents and grandparents about their own cultural and religious traditions, bringing information and examples to the class.

Palestinians from East Jerusalem do not usually intermingle with their Jewish neighbours. Such occasions that bring them face to face are quite unique.

Lack of funding is a constraining factor. The organisation is currently funded by a mix of foundations and foreign embassies, as well as Christian and Jewish communities seeking to promote interfaith interaction and co-existence.

The current level of support allows for 500 children from five different schools to participate.

“What I tell funders is that for every pupil who graduates from the programme, effectively learning compassion and understanding, the potential recourse to violence is reduced,” says Lichman.

While a wider trend within the Palestinian population indicates wariness of “coexistence” initiatives, as these are seen as benefiting the Israeli occupation, Lichman declares that “our Palestinian partners do not subscribe to this view. They are rather of the persuasion that understanding and communication can only benefit both sides.”

Lichman goes on to explain that pride in family folklore, and especially food traditions, is basic to understanding culture in the Middle East. “This is where we start, where we find common ground. But religion and family history are also important, and these are focused on in the later stage of the programme.”

Following the first two stages of games and food, in the third stage the mixed groups of children visit a synagogue and a mosque. A rabbi explains Judaism, while an Imam takes listeners through the tenets of Islam.

Even if the pupils are not able to remember every detail of the lessons covering religion, they do come away changed by the experience, affirms Lichman. He also stresses that one important aspect of his programme is that it takes an approach that can get the whole community talking.

Dorian Levin, a Jewish woman from Jerusalem, is also a programme alumnus who has become a member of the CCECH staff. She says the results have been meaningful.

“At the same time, it is also very hard. The realities are difficult, and whole communities have been told for decades not to trust the other. If we want to forge deeper relationships, this will take more time.”