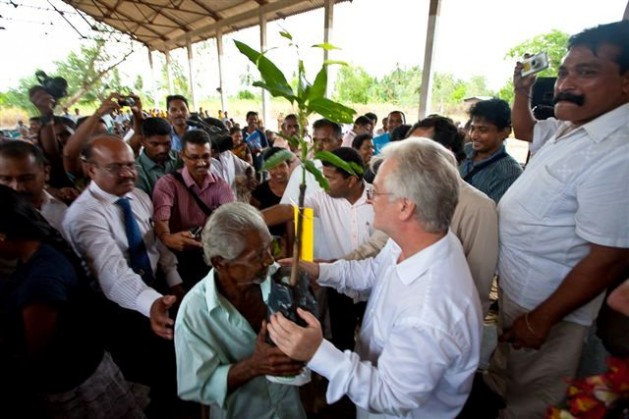 COLOMBO, Aug 19 2012 (IPS) - Sri Lanka is in for some hard bargaining when it negotiates a new aid pact in 2013 with the European Union (EU), which withdrew a key trade concession  two years ago over this country’s human rights record.

Savage told IPS in an interview that the issue of withdrawal of  EU trade concessions was a specific case. “But, if you look at the broad spectrum of trade relations … that was not affected by short-term considerations.”

However, well-known human rights lawyer J.C. Weliamuna believes that trade and aid are invariably linked to human rights and corruption – two sectors where Sri Lanka has been asked to show tangible progress.

“What is promised on paper (by the government) is exactly the opposite of what is implemented on the ground,” the lawyer, a board member of Transparency International, told IPS.

The EU is among Sri Lanka’s largest providers of development assistance and has allocated an overall sum exceeding 478 million dollars for the  2007-2013 period for projects dealing with water and sanitation, housing, income generation, infrastructure, schools, health facilities, food security and others.

Sri Lanka had won generous tax concessions under the Generalised System of Preferences Plus (GSP+)  for the July 2005  – August 2010, but this facility was withdrawn over unaddressed human rights concerns.

EU investigations had found ”shortcomings in respect of Sri Lanka’s implementation of three United Nations human rights conventions – the International Covenant on Civil and Political Rights, the Convention against Torture and the Convention on the Rights of the Child.”

However, it was widely understood that the concessions were withdrawn owing to Sri Lanka’s failure to address alleged war crimes during the last stages of the country’s ethnic conflict.

The impact of lost EU concessions is now being felt with garments exports to Europe dropping by 15-20 percent in the five months up to May, said Rohan Abeykoon, chairman of the Sri Lanka Apparel Exporters Association.

“It’s not the job losses that we are worried about because there is demand for labour, but lost contracts are affecting small and medium businesses,” Abeykoon said. “Local companies are losing out while those with multinational connections will shift production elsewhere.”

Abeykoom told IPS that he has urged the government to reapply for the facility, though there is no sign of that happening yet.  “With regard to GSP + we have had no request from the government for a new facility,” Savage confirmed.

Trade unions are also backing the call for a revival of the  concessions. Palitha Athukorala, president of the Progress Union of Sri Lankan Apparel Workers, said the government seems unconcerned and has made no attempt to apply for GSP +.

“They (government) should ask for it. We are badly affected as small factories are closing and workers are losing jobs,” Athukorala told IPS.

Padmini Weerasuriya, coordinator of the Women’s Centre, a non-government organisation active in the country’s free trade zones, says there are no job losses owing to the loss of GSP + concessions, though this may change.

“Our members (workers) have reported a drop in orders which then affects other incentives outside the monthly wage,” she said. Unions have already been campaigning for decent living wages.

On the political front, Sri Lanka this month did a major about-turn to invite the U.N. Human Rights Council to visit the country to review the human rights situation.

Earlier, Sri Lanka had even refused entry to a EU team examining Sri Lanka’s application for a renewal of GSP+ benefits.

The government has prepared an action plan on human rights and sent it to Geneva, five months after the U.N. passed a United States-backed resolution urging Sri Lanka to address alleged human rights abuses.

The March U.N. motion had called on Colombo to address violations of international humanitarian law; implement the recommendations of a local commission that probed the conflict; and encourage the U.N. Human Rights office to offer Sri Lanka advice and assistance and the government to accept such advice.

Sri Lankan President Mahinda Rajapaksa has repeatedly denied claims of large-scale civilian casualties during the last stages of the battle against Tamil separatist rebels that ended in May 2009.

Strained relations with the West have forced the government to rely on allies in the neighbourhood like China, Iran, Libya and India for war-related and development aid.

Constant international pressure and the March U.N. resolution – which was backed by India, a long-time Sri Lanka supporter – has  forced Sri Lanka to make conciliatory gestures to the West.

The respected Sunday Times newspaper said on Aug. 5 that the government’s decision to implement the full U.N. resolution and allow a U.N. team to visit the country would pave the way for a long-standing visit by U.N. Commissioner for Human Rights, Navi Pillay, considered a vocal critic.

Weliamuna said issues in which the international community is concerned – human rights, declining rule of law, growing impunity and corruption – are relevant. “The government knows it cannot continue in this manner and is trying to convince the world that it has changed,” he said.

Abeykoon says the devaluation of the Sri Lankan rupee against the US dollar,  which has pushed the  rupee down to 132 per dollar, against 110 in February, has helped the garment industry. “If not, our exports (to the EU) would have worsened.”

For Savage, the GSP + is a “closed chapter”, using a phrase borrowed  from Sri Lanka’s external affairs minister Gamini Lakshman Peiris. “The fact is GSP+ was withdrawn and Sri Lanka has not reapplied. We need to move on,” Savage said.