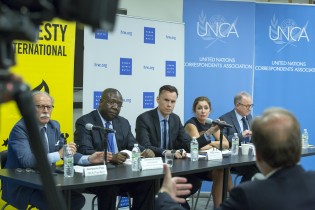 By Thalif Deen
The 47-member Human Rights Council (HRC), responding to a request by the newly-elected government in Colombo, has deferred the release of a key U.N. report on human rights violations and war crimes charges against the Sri Lankan armed forces and Tamil separatists who fought a devastating decades-long battle which ended in 2009.

By Catherine Wilson
Thirteen years after the peace agreement which ended a decade-long civil war in Bougainville, an autonomous island region of 300,000 people located east of the Papua New Guinean (PNG) mainland in the southwest Pacific Islands, trauma and grief continue to affect families and communities where the fate of the many missing remains unresolved.

By Thalif Deen
The United Nations, which remains politically deadlocked over the drawn-out crisis in Syria, has hit another roadblock, this time over humanitarian assistance to the thousands of men, women and children caught up in the 11-month-old conflict.

By Constanza Vieira
Illegal spying on human rights activists and journalists is still happening in Colombia, according to a new report by the Office of the United Nations High Commissioner for Human Rights.
ADVERTISEMENT ADVERTISEMENT