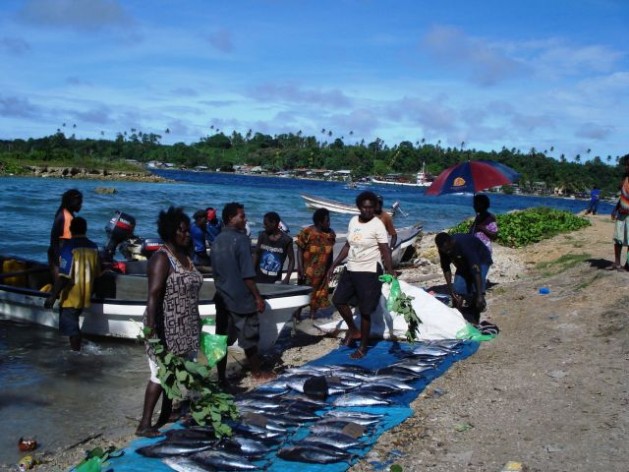 Scene in north Bougainville. Searching for the missing following a civil war has been identified as a priority for reconciliation and development in the region. Credit: Catherine Wilson/IPS

SYDNEY, Australia, Dec 21 2014 (IPS) - Thirteen years after the peace agreement which ended a decade-long civil war in Bougainville, an autonomous island region of 300,000 people located east of the Papua New Guinean (PNG) mainland in the southwest Pacific Islands, trauma and grief continue to affect families and communities where the fate of the many missing remains unresolved.

The Autonomous Bougainville Government, identifying this as a barrier to progressing post-conflict reconciliation and development, introduced a policy in September to begin helping families answer questions and find closure.

“Most perpetrators will not admit to being responsible [for the fate of the missing] unless assured there is reconciliation after remains have been recovered and identified." -- Nick Peniai

“This is very important for reconciliation,” Nick Peniai, head of the Autonomous Bougainville Government’s Department of Peace and Reconciliation, told IPS.

“Most perpetrators will not admit to being responsible [for the fate of the missing] unless assured there is reconciliation after remains have been recovered and identified” and “reconstruction will become meaningful to families after they have reunited with their loved ones.”

Patricia Tapakau, a community leader in the vicinity of the Panguna mine, agreed, saying that the new policy received her full support.

There is no accurate data about the human loss which occurred during hostilities between the PNG military and indigenous militia groups involved in a local uprising in 1989 that succeeded in shutting down the Panguna copper mine, formerly operated by the Australian company, Bougainville Copper Ltd.  But some estimates of the death toll run as high as 20,000.

The mine, a major revenue earner at the time for the PNG government, was at the centre of local grievances about loss of customary land, environmental devastation and increasing inequality. The conflict continued following a government blockade of the islands in 1990 until a permanent ceasefire in 1998.

Today many families on the islands continue to search for their missing loved ones, reports the United Nations Office of the High Commissioner for Human Rights (OHCHR). The endless uncertainty about their fate is keeping the memory and suffering of the war alive in communities and inhibiting people’s confidence in a better future.

“We need reconciliation from one end of the island to the other….we need to restore the relationship with the bodies that have rotted in the jungle by bringing them back to their villages and giving them dignity by doing a proper burial,” a community leader from Guava village near the mine was quoted in a report by Jubilee Australia.

But, according to Peniai, it has only recently become feasible to publicly address this sensitive issue.

“It could not have been possible to get information on missing persons soon after the brokering of peace 13 years ago due to fear for the lives of those with the information, and the same on the part of those who were responsible for the killings in the event of being exposed.  The families of missing people were also not attempting to investigate for the same reason of fear,” he explained.

Conditions are more conducive to this occurring now, Peniai believes, with people willing to freely discuss the issue and some improvements to the law enforcement sector, which is supporting public confidence.

The United Nations Convention for the Protection of All Persons from Enforced Disappearance supports international human rights laws that place an obligation on warring parties, including governments, military forces and armed groups, to take all possible measures to search for and return missing persons, or their remains, to next of kin.

In Bougainville, the new policy will address the humanitarian needs of affected communities, but exclude bringing perpetrators to justice and claims for compensation.  Implementation will include seeking information about victims’ whereabouts, identifying burial sites, exhumation and forensic identification of remains before their return to relatives for burial.

The International Committee of the Red Cross (ICRC) will be on hand to assist the Bougainville Government and its partners with advice and expert support as the policy is rolled out.

Families of those who have disappeared “may have psycho-social needs which require medical attention, even years later, this is an important need in Bougainville,” Gauthier Lefèvre, Head of Mission for the ICRC in Papua New Guinea, told IPS.

“Many may also have difficulties making ends meet economically or be in a vulnerable position within society due to absence of their usual support networks.”

The humanitarian organisation supports similar efforts to reconcile families in other post-conflict zones, such as Bosnia-Herzegovina, Croatia, Iran and Iraq.  It emphasises these measures are vital to helping people overcome anger and mistrust. If unaddressed, this burden can be passed on to a younger generation who are at risk of inheriting a sense of humiliation and injustice.

The Leitana Nehan Women’s Development Agency, a local non-governmental organisation, claims that unaddressed trauma has been a direct factor in high levels of alcohol and domestic abuse and violence against women, including rape, on the islands since the end of the ‘Bougainville crisis.’

During the three months of April, July and August 2010 alone, local police received reports of 84 sexual offences, 261 cases of domestic violence and 16 of child abuse.

Returning the remains of loved ones “is unfinished business on the road to healing, forgiveness, rehabilitation and reconstruction of whole communities” in the autonomous region, claims the OHCHR.

It “will bring closure and even psychological healing to families of missing persons and in some cases resolve legal issues linked to landownership and inheritance,” Lefèvre said.  He added that such efforts “certainly have an impact on human and social development in post-conflict zones.”

Peniai believes there will be benefits for human development “in the sense of establishing national unity, as a truly reconciled society is likely to be more stable.”

The peace process in Bougainville since 2001 has been assisted by the United Nations and international aid donors, but the autonomous region still faces immense development challenges. Life expectancy is 59 years and the under-five mortality rate is 74 per 1,000 live births, compared to the global average of 46, reports the National Research Institute.

In Central Bougainville, where the conflict originated, 56 percent of people do not have access to safe drinking water and 95 percent lack access to sanitation, according to World Vision.