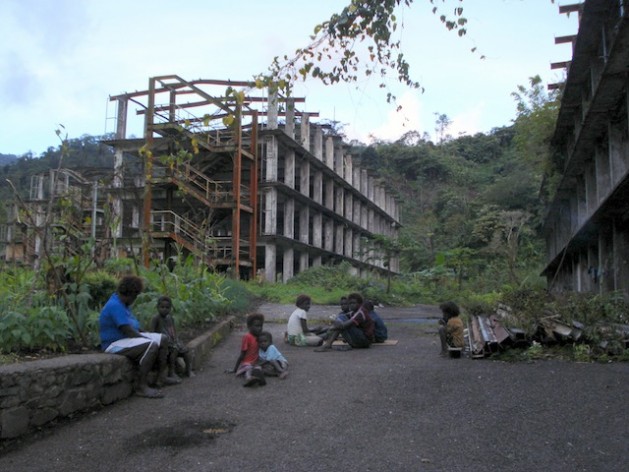 SYDNEY, Oct 28 2014 (IPS) - The viability of reopening the controversial Panguna copper mine in the remote mountains of Central Bougainville, an autonomous region in the east of Papua New Guinea, has been the focus of discussions led by local political leaders and foreign mining interests over the past four years.

But a report by an Australian non-government organisation warns that the wounds left on local communities by the corporate mining project, “the environmental destruction associated with it” and the civil war that stretched from 1988 to 1997 are far from healed.

Its findings include widespread opposition in directly impacted villages to the mine’s revival in the near future.

“We planted taro, but it wouldn’t grow like before [the mine] and the breadfruit trees didn’t have any fruits […]. In Panguna, the chemicals are still there in the river. No-one drinks the water, there is no fish there." -- Lynette Ona, a member of the Bougainville Indigenous Women Landowner Association
“I believe the report was honest and sincere in that it gave people from the mine-affected areas an opportunity they are not always accorded, to come out and really make known to the world their problems, hopes and fears,” Jimmy Miringtoro, member of parliament for Central Bougainville, where the mine is located, told IPS.

The mine was formerly operated by the Australian company Bougainville Copper Ltd (BCL), which is 53 percent owned by Rio Tinto, from 1969, but forced to shut down 20 years later following an uprising by indigenous landowners angered by economic exploitation, loss and degradation of land, and political marginalisation.

The ‘Voices of Bougainville’ study was conducted at the end of last year with 65 individuals and a focus group of 17 living in 10 villages in and around the mine site by Jubilee Australia, which investigates Australian state and corporate responsibility for environmental and human rights issues, in association with a university research consortium called the International State Crime Initiative, and Papua New Guinean civil society organisation Bismarck Ramu Group.

“The study was not an opinion poll … our primary aim was to better understand local views on mining and development … it was felt that there was an absence of publicly available qualitative data offering a window into the past and its interspersion with the present in the mine affected region,” Kristian Lasslett of the International State Crime Initiative told IPS.

The former mine lease area covers 13,047 hectares of forested land and the main villages in the vicinity of the mine are home to an estimated 4,000-5,000 people, according to data obtained by IPS in 2011 through interviews with locals.

“BCL destroyed our lives, took our land, took our money and never properly compensated our parents who were the rightful titleholders of the land which they took … now they want to come and reopen Panguna mine, this is a no, I personally say no to the reopening of the Panguna mine,” said a villager from Dapera, near to the mine pit, quoted in the report.

His claims find echo among grassroots communities. Panguna landowner and member of the Bougainville Indigenous Women Landowner Association, Lynette Ona, agreed that most people in the area didn’t want mining. Ona recently led a women’s delegation to the PNG Prime Minister’s office to raise their opposition to mining before the region achieved complete self-government.

Autonomous Bougainville Government (ABG) President John Morris has publicly rejected the report and its findings, claiming that there is majority support for the industry if negative impacts are avoided.

He is supported by landowner associations, which are members, along with Bougainville Copper Ltd and the PNG Government, of the multi-stakeholder Joint Panguna Negotiations Co-ordinating Committee.

The Panguna copper mine opened when Papua New Guinea was under Australian administration and delivered around two billion dollars in revenues, of which 94 percent went to shareholders and the PNG Government and 1.4 percent to local landowners.

Hostility and opposition to the mine by local communities, apparent from the exploration phase, intensified when environmental devastation, air pollution and tailings from the mine, which contaminated agricultural land and the nearby Jaba River, decimated their health, food and water security.

“We planted taro, but it wouldn’t grow like before [the mine] and the breadfruit trees didn’t have any fruits […]. In Panguna, the chemicals are still there in the river. No-one drinks the water, there is no fish there,” Ona described.

When BCL refused to pay landowners compensation of 10 billion kina (about 3.9 billion dollars) in 1989, a 10-year civil war broke out between Bougainville revolutionary forces and the PNG military leading to widespread destruction on the island and an estimated death toll of up to 20,000.

Peace-building initiatives supported by the United Nations and international aid donors have been ongoing since the 2001 peace agreement, but post-conflict trauma remains mostly untreated and disarmament and reconciliation is unfinished.

A majority of the study’s respondents were concerned about problems related to the mine and conflict, which had not been addressed, and lack of justice in the peace process.

“No-one has been brought to court; the issue has been ignored despite its seriousness,” said a woman from Darenai village.

Reviving the mothballed mine is imperative to generating sufficient state revenue to “make greater progress towards autonomy and our choice about independence,” ABG President Morris said during a speech to the Bougainville House of Representatives in August.

A referendum on the region’s independence from Papua New Guinea (PNG) is planned within the next six years.

BCL estimates Panguna contains more than three million tonnes of copper reserves and could produce 400,000 ounces of gold per year. Restarting the mine would require an investment of five billion dollars with potential revenues estimated at more than 50 billion dollars.

Bougainville has an estimated population of 300,000 and potential direct employment of only 2,500 has been suggested with the ratio of local workers not identified.

Since 2010 the Bougainville government has established a framework for landowner consultations and conducted stakeholder forums across the island to assess public opinion, claiming these indicate a green light for mining.

Thirteen of 65 participants in the Jubilee study said they would support the extractive industry under certain conditions: after Bougainville has achieved independence in order to minimize foreign interference; after compensation and reparation are delivered; and after other forms of economic development, such as agriculture, have been explored.

“There has been anecdotal evidence that mining consultation forums have so far been geared too heavily towards advocacy. A significant number of participants felt the landowner associations were not relaying a popular consensus from their respective communities,” State Crime Initiative’s Lasslett claimed.

Miringtoro, the parliamentarian from Central Bougainville, told IPS that he was “satisfied that the 65 people interviewed were a fair and representative sample of the people who are totally against mining. [They] are from village communities situated all throughout mine and tailings area … which has been changed into a moonscape with arable land buried under tonnes of silt and rock.”

The state and corporate sectors promote mining revenues as necessary for growth and poverty reduction on Bougainville where many people live without basic services, such as a clean water supply, electricity and medical services. The province has 10 doctors serving more than a quarter of a million people; less than one percent of people are connected to electricity; and life expectancy is 59 years.

However, the record so far in Papua New Guinea is that economic dependence on the extraction of minerals, such as copper, gold and nickel, over the last 30-40 years, with GDP growth reaching 11 percent in 2011, has not resulted in development for the majority of citizens.

Forty percent of the population of seven million live below the poverty line, only 12 percent have access to electricity, adult literacy is 50 percent and malnutrition is high with stunting prevalent in half of all children, reports the United Nations Children’s Fund (UNICEF).

“In PNG, despite a booming economy, driven by extractive industry, income and human poverty persist and a majority of the population live in rural, isolated areas with little or no access to basic services, such as healthcare, education, sanitation and safe drinking water,” the United Nations Development Programme (UNDP) reported this year.

The organisation added, “Foreign investors and contractors absorbed a large proportion of the benefits of the strong growth the country enjoyed over the last decade.”

The people of Bougainville desire development and better lives. But for many of those who have lived with the mine at their doorstep, the accelerating pace of discussions about its reopening are in stark contrast to lack of progress on resolving the problems, injustices and legacy of suffering that it has already caused.