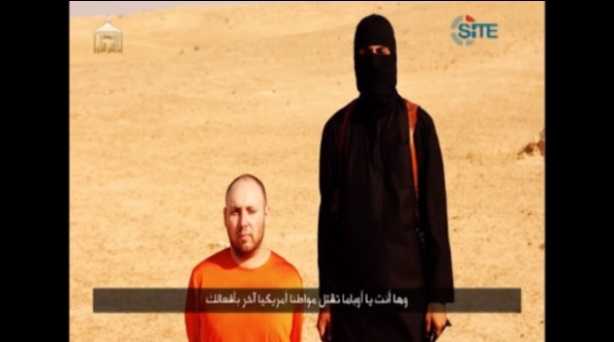 Journalist Steven Sotloff, moments before he was killed, in a screen capture from the video posted by ISIS. Credit: IPS

WASHINGTON, Sep 3 2014 (IPS) - While the administration of U.S. President Barack Obama ponders broader actions against the Islamic State of Iraq and Syria (ISIS), Amnesty International Tuesday accused the group of carrying out ethnic cleansing in Iraq on a “historic scale.”

In a 26-page report, which was based on on-site investigations and interviews with victims and witnesses of mass executions and abductions, the London-based rights group said the threats to ethnic minorities in the areas under ISIS’s control “demand a swift and robust response … to ensure the protection of vulnerable communities who risk being wiped off the map of Iraq.”

“The group that calls itself the Islamic State (IS) has carried out ethnic cleansing on a historic scale in northern Iraq,” the report said. “Amnesty International has found that the IS has systematically targeted non-Arab and non-Sunni Muslim communities, killing or abducting hundreds, possibly thousands, and forcing more than 830,000 others to flee the areas it has captured since 10 June 2014.”

Amnesty’s report was released as another major international rights organisation, New York-based Human Rights Watch (HRW), charged ISIS with executing between 560 and 770 men – all or most of them Iraqi army soldiers – in Tikrit after it took control of that city on June 11 as part of its stunning drive across northern and central Iraq. The following day, ISIS itself claimed to have executed 1,700 “Shi’a members of the army.”

The new HRW estimate, which was based on testimony from a survivor and analyses of videos and satellite imagery, was triple the death toll HRW had reported at the end of June. The group said the imagery confirmed the existence of three more mass execution sites in and around Tikrit in addition to the two it had reported earlier.

“Another piece of this gruesome puzzle has come into place, with many more executions now confirmed,” said Peter Bouckaert, HRW’s emergencies director. “The barbarity of the Islamic State violates the law and grossly offends the conscience.”

“The reports we have received reveal acts of inhumanity on an unimaginable scale,” Flavia Pansieri, the deputy high commissioner for human rights, told the Council.

The Amnesty and HRW reports came as ISIS posted a video purporting to show its beheading of a U.S. reporter, Steven Sotloff, who had been kidnapped in August 2013 while he was covering the civil war in Syria for Time magazine and the Christian Science Monitor, among other publications.’

The grisly video, which is certain to add pressure on the Obama administration to expand recent U.S. airstrikes against ISIS to include targets in Syria, as well as in Iraq, followed the release of a video of the beheading by ISIS two weeks ago of another U.S. reporter, James Foley. It also came after an emotional videotaped appeal aired last week by Sotloff’s mother to ISIS’ leader, Abu Bakr al-Baghdadi, to spare her son.

Sotloff had appeared in the Foley video, with the purported executioner, who is believed to be a British national, warning that Sotloff would be next to be killed unless Obama ceased conducting air strikes against ISIS positions around Mt. Zinjar and convoys approaching Erbil, the capital of Kurdistan.

Obama, however, has since broadened the U.S. target list. Dozens of air strikes have been carried out in coordination with ground attacks by Iraqi special forces, Shi’a militias, and Kurdish peshmerga fighters in a counteroffensive that initially recaptured the giant Mosul dam from ISIS forces and, more recently, reportedly broke the group’s siege of the largely Shi’a Turkomen town of Amerli.

“I’m back, Obama,” the same masked executioner said on the latest video. “I’m back because of your arrogant foreign policy toward the Islamic State, because of your insistence on continuing your bombings.”

“We take this opportunity to warn those governments that enter this evil alliance of America against the Islamic State to back off and leave our people alone,” he added, while standing over yet another unidentified captive who is believed to be a British citizen.

For its part, the White House released a statement noting that it had seen the video and that the intelligence community was working to determine its authenticity. “If genuine, we are appalled by the brutal murder of an innocent American journalist and we express our deepest condolences to his family and friends.”

Obama, who left Tuesday for the NATO summit in Wales later this week, is expected to urge other members of the alliance to adopt a coordinated strategy of diplomatic, economic, and military pressure against ISIS, which spread from its base in eastern Syria into Iraq’s Al-Anbar province in early 2014 before its sweep down the Tigris and Euphrates river valleys into northern and central Iraq beginning in June.

Among other measures, Washington wants its European allies to adhere to U.S. and British policies against ransom payments to free citizens who are captured by ISIS – a practice that has reportedly become a major source of income for the group.

Secretary of State John Kerry and Pentagon chief Chuck Hagel are also scheduled to visit key allies in the Middle East next week, especially in the Sunni-led Gulf states, to persuade them to crack down harder against their citizens who fund or otherwise support ISIS, offer greater support to a new government in Baghdad, and possibly contribute direct support for expanded international military efforts against the group.

Like the administration itself, U.S. lawmakers, who return here from their summer recess next week, are divided on how aggressively Washington should take military action against ISIS.

While many Republicans are urging Obama to conduct air strikes – and even deploy ground forces – against the group in Syria, as well as Iraq, many Democrats are concerned that such an escalation could well lead to Washington’s becoming bogged down in yet more Middle Eastern conflicts.

Some key Democrats, however, are becoming more hawkish, a process that is likely to strengthen as a result of Sotloff’s execution.

“Let there be no doubt we must go after ISIS right away because the U.S. is the only one that can put together a coalition to stop this group that’s intent on barbaric cruelty,” said Florida Sen. Bill Nelson Tuesday in announcing legislation that would give Obama legal authority to strike ISIS in Syria.

In its report, Amnesty detailed mass killings last month by ISIS forces of hundreds of non-Sunni Muslim men and boys as young as 12 in the predominantly Yazidi regions in Nineveh Province, as well as the mass abductions of women and children, many of whom, according to the report, are being held in Mosul, Tal ‘Afar, and Bi’aj under pressure to convert to Sunni Islam. Many others remain unaccounted for.

“The Islamic State is carrying out despicable crimes and has transformed rural areas of Sinjar into blood-soaked killing fields in its brutal campaign to obliterate all trade of non-Arabs and non-Sunni Muslims,” said Donatella Rovera, Amnesty’s senior crisis response adviser currently based in northern Iraq.

In addition to Yezidis, targeted groups include Assyrian Christians, Turkmen Shi’a, Shabak Shi’a, Kakai and Sabean Manaeans, as well as many Arabs and Sunni Muslims who are believed to oppose ISIS, according to the report which also called for Iraq’s government to disband Shi’a militias, some of which are believed to have targeted Sunni communities in the region.

“Instead of aggravating the fighting by either turning a blind eye to sectarian militias or arming Shi’a militias against the Islamic State as the authorities have done so far, Iraq’s government should focus on protecting all civilians regardless of their ethnicity or religion,” according to Rovera.