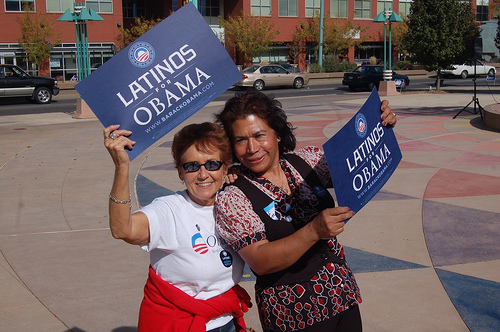 When he was elected in 2008, Barack Obama won 80 percent of the minority vote. Credit: Matt Lemon/cc by 2.0

WASHINGTON, Sep 25 2012 (IPS) - With just six weeks left before the U.S. presidential polls, analysts on Tuesday suggested that recent demographic changes in the United States, particularly through immigration, have made it more difficult than ever for a Republican candidate to vie for president.

The current challenger, Mitt Romney, does not appear to be making up nearly enough lost ground to take the election.

According to some scholars and poll-watchers, the trend is not only complicating Republican hopes for the 2012 polls, but could continue to do so in coming years unless the party undertakes a significant reappraisal of its social and economic policy approaches.

Today, most polls show Obama leading Romney by three or four percentage points, including in almost all of the critical “swing” states where neither candidate’s lead is decisive. For Republicans, the difficulty stems from two subsections of the U.S. voting public, both of which have been turning against the party in recent years: minority voters and white college-educated voters, particularly women.

When he was elected in 2008, Barack Obama won 80 percent of the minority vote and 52 percent of college-educated white women. According to recent polls, Obama’s current lead in these demographics remains almost identical.

Because of these changes, if Obama again gets 80 percent of the minority vote – which now looks likely – Romney would have to double the share of the white vote that John McCain, the Republican challenger in 2008, received.

Certain state polls today even have Romney winning by 20 points or more, but Teixeira’s research suggests that this still wouldn’t be enough. “Nowhere do you see these outsized margins that he really needs to win the election, given how Obama appears to be holding his support among minority voters and even then some among white college-graduate voters.”

In fact, if Obama is able to match the 80 percent non-white vote again this year, he would need just 40 percent of the white vote to win the election.

“The math that gives you at this point is that Romney would have to win two-thirds of all other votes to get a national majority,” Ronald Brownstein, political director at Atlantic Media, said Tuesday. “Now, he can do that – Republicans were in that neighbourhood in 2010. But two-thirds of all other voters were what (President Ronald) Reagan won in 1984 during the most decisive landslide in modern American history. So that’s a steep hill.”

Despite the mounting criticisms of the Romney campaign, Romney is not doing poorly among his primary demographic, but this may not be helpful enough. Indeed, Brownstein suggests that Romney could do as well among whites as any Republican challenger ever – in the 56-to-61 percent range – but still lose, due to demographic changes that only look set to continue.

“The existing (Republican) coalition is so dependent on a part of the country that is incredibly uncomfortable with demographic change,” Brownstein says. “They’re paralysed, for instance, between an intellectual understanding that they have to reach out to Hispanics and the difficulty that they’re finding (in trying to doing so).”

Immigration is seen as a “gateway” issue for many immigrants, meaning that even if Romney’s platform were to appeal to some, he is not being heard by those voters. This is due to his adoption, spurred by some of the most conservative wings of the Republican Party, of what some have described as a “radical” immigration-related agenda.

“What the Republican Party has done is lurch to the right,” says Frank Sherry, executive director of America’s Voice and a longtime expert on the Hispanic community. “This has hurt badly with Hispanics.”

And while Hispanic voters get much of the attention in today’s U.S. political analysis, the broader immigration story looks equally problematic for the Republicans.

Asian Americans, for instance, recently surpassed Hispanics as the country’s fastest-growing minority population, expanding at a rate of 46 percent over the past decade. Ahead of the 2008 elections, some 600,000 Asian Americans registered to vote for the first time, while similar figures are expected this time around.

“Perhaps the most important sociological and political development in the past two decades has been the massive shift in the voting allegiances of the Asian American population,” Karthick Ramakrishnan, director of the National Asian American Survey, said Tuesday elsewhere in Washington, launching a uniquely detailed report on the Asian American community.

“Asian Americans went from voting less than a third for the Democratic presidential candidate in 1992 to almost two-thirds in 2008.”

Further, the report finds abnormally high support among Asian Americans, compared to the rest of the population, for issues that are generally seen as Democratic strongholds, including on the environment, affirmative action, undocumented immigration and health-care reform.

The question, then, is when the Republican Party will respond to what could quickly be becoming an existential problem.

The situation “should precipitate a conversation in the party”, Brownstein says. “One Romney advisor said to me, ‘This is the last time anyone will try to do this,’ meaning assemble a national majority almost entirely on the back of white votes.”