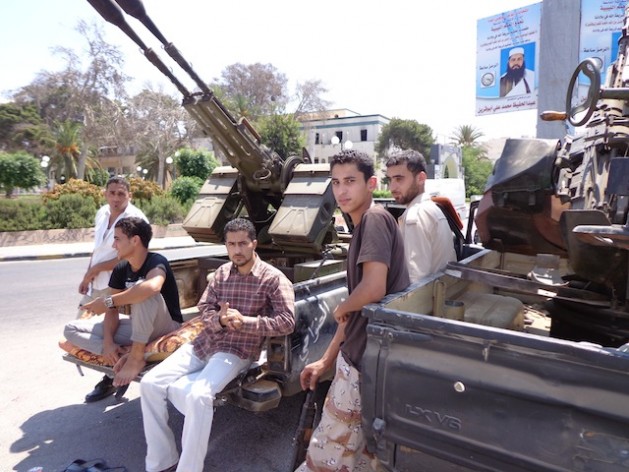 TRIPOLI, Sep 12 2012 (IPS) - The killing of U.S. ambassador to Libya Christopher Stevens comes in the wake of a new threat of Islamic fundamentalism that has rocked Libya over the last few weeks.

A number of presumed Salafist attacks have been carried out against foreign consulates and interests in Benghazi since the end of the war. Some embassies in Tripoli have recently been threatened.

Radicals have also warned Libyan women to dress conservatively and to cover their hair. Jihadists have called for gender segregation in educational facilities.

Libya is littered with signs of the growing power of Salafists, such as the recent destruction of Sufi shrines. From Tripoli’s Al Mahary Radison Blu Hotel the azure waters of the Mediterranean ocean can be seen lapping along miles of powdery white beaches. But this stunning view is scarred by piles of rubble and bent steel girders in concrete.

The destroyed buildings are not a result of North Atlantic Treaty Organisation (NATO) bombardment of intelligence or military buildings belonging to the regime of the late Muammar Gaddafi, but an Ottoman-era Sufi shrine and mosque.

IPS witnessed the shrine and mosque being deliberately destroyed by armed Salafists using bulldozers and diggers, as members of Libya’s armed forces and police stood by and guarded them, while barring journalists and blocking the road to traffic.

Salafists follow a puritanical strain of Islam and believe Sufiism (a mystical Islamic sect), and the dancing they partake in, to be heretical.

The destruction was carried out over a three-day period despite public protests, and outrage expressed by some members of the Libyan government who accused the interior ministry of not only failing  to protect the historic sites but also possible involvement in demolishing them.

Some of the Islamists who took part in the destruction are allegedly serving members of the Supreme Security Committee (SSC), an amalgamation of militias and some of Libya’s security forces, comprising approximately 100,000 men, with varying loyalties and differing ideologies. The SSC is believed to have been heavily infiltrated by both Islamists and hard-core Gaddafi loyalists.

Throngs of flag-waving, joyful Libyans had descended once on Martyr’s Square, known as Green Square under Gaddafi, to celebrate Libya’s new freedom after the overthrow of the Gaddafi regime. But this taste of freedom may be short-lived.

Three Sufi shrines in Tripoli, Zliten and Misrata (east of Tripoli) have been systematically destroyed, and a library containing hundreds of historic books and manuscripts was burned down. About 30 Sufi graves in Tripoli’s old city were attacked.

Libyan Interior Minister Fawzi Abdel Al provoked outrage when explaining the failure of security forces to intervene. He said he was not prepared for lives to be lost over “some old graves”. He admitted that heavily armed religious extremists were too many and too powerful for Libya’s weak security forces to confront.

“If we deal with this using security we will be forced to use weapons, and these groups have huge amounts of weapons. They are large in power and number in Libya,”  Abdel Al told journalists.

Salafists have warned of retaliation, in a sign of escalating sectarian warfare.

These latest developments come as analysts increasingly warn that Islamists including Al Qaeda operatives are looking to fill the political vacuum and feed regional conflicts in the wake of the Arab Spring. Earlier speculation that after the first free democratic elections in nearly 50 years in July Libya would buck the Islamist trend in neighbouring countries appears to have been premature.

Daniel Nisman, intelligence manager at Max Security Solutions, a geopolitical risk consulting firm based in Tel Aviv says, “Emboldened Islamic extremism represents a clear policy failure by the Libyan athorities, who refused to brand the violence as a national threat. Dangerous as they are, Islamists are the tip of the iceberg when it comes to ignored threats to Libya’s national security.”

Aymenn Jawad Al-Tamimi, a Shillman-Ginsburg Fellow at the Middle East Forum, sees parallels in growing sectarianism in Libya and Iraq.

“The post-Gaddafi Libyan security forces are being built up in much the same way as the new Iraqi security apparatus was created and developed following the fall of Saddam’s regime. That is, facing a situation of chaos caused by competing militias, the post-Gaddafi Libyan government has pursued a policy of trying to build up the new security forces as quickly as possible – an approach that was also adopted by the United States in Iraq,” says Tamimi in his article for the forum, Rethinking Libya.

“However, the major problem is that the focus is on quantity, not quality, and so political factions and other ideologues can take advantage of the situation, flooding the ranks of the new security forces with their own partisans.”