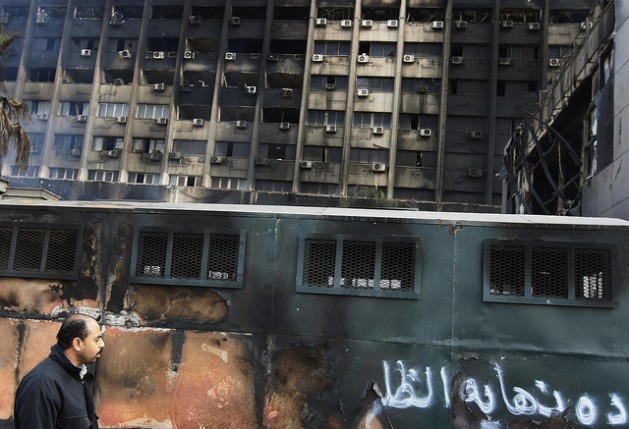 Much of the anger in Egypt has been fuelled by labour demands. Credit: Mohammed Omer/IPS

WASHINGTON, Sep 5 2012 (IPS) - As reports surfaced Tuesday that U.S. negotiators, in Cairo for the past week, are closing in on an agreement to cut a billion dollars from Egypt’s bilateral debt, the State Department here announced that a record-sized U.S. business delegation would travel to Egypt later this week.

Any debt relief, reportedly to be made up of unused U.S. aid, would signal the end of a year and a half of vacillating on the part of the United States over how to engage with Egypt’s post-Arab Spring governments, particularly that led by President Mohamed Morsi’s Muslim Brotherhood.

Doing so would also finally make good on a 2011 pledge that President Barack Obama made to renegotiate Egypt’s debt, a plan reiterated by U.S. Secretary of State Hilary Clinton’s visit to the country in July even as the programme did not go forward.

“Economic recovery is essential to any prospect Egypt has for a peaceful transition to democracy,” Neil Hicks, with Human Rights First, a Washington-based watchdog, said on Tuesday. “At this delicate time, when Egypt is emerging from over a year of political uncertainty and turmoil, the United States is right to offer debt relief.”

Originally, Washington’s offer was to “swap” a portion of Egypt’s bilateral debt to assist in job-creation. In July, Clinton had also noted a possible 60-million-dollar programme to support the creation of small- and medium-sized enterprises.

Although the details of the new package are yet to emerge, on Tuesday State Department spokesperson Patrick Ventrell noted that “dept swaps” remain “one of the options”.

Worryingly, after initial reports emerged of the talks, Egyptian Prime Minister Hisham Qandil stated that his government had not been officially consulted on any U.S. debt-relief plan, according to a report in a state-run newspaper on Tuesday.

President Morsi, having recently asserted his control over the military powers that had ruled Egypt since Mubarak’s downfall, is currently attempting to right the country’s floundering economy, which has been hit hard by spooked foreign investors and tourists in the aftermath of the January 2011 popular uprising that knocked longtime leader Hosni Mubarak from power.

The situation has exacerbated the country’s 35-billion-dollar external debt, threatening a balance-of-payments crisis. On Monday, the Egyptian pound dropped to its weakest point in more than seven years, as the Egyptian government attempts to make up a 25-billion-dollar budget gap.

Recent years have seen rising frustration with U.S. positions in Egypt, not only for Washington’s longstanding support for Mubarak but also with U.S. officials’ lack of policy clarity in the aftermath of Mubarak’s fall.

Despite President Obama’s May 2011 pledge, for instance, little has taken place on this front in the intervening year and a half. Last week’s arrival of the U.S. government negotiating team in Cairo marked the first resumption in related talks in a year.

Indeed, analysts have made much of President Morsi’s decision to visit Beijing last week – before making his first state visit to Washington. Some suggests this highlights the raging war of influence in the Arab World and much of Africa between China and the United States.

During that trip, Chinese officials offered Egypt a 200-million-dollar loan and signed a series of investment agreements. In addition, the governments of Qatar and Saudi Arabia have already moved to shore up Egyptian coffers by offering two billion dollars apiece.

In late August, President Morsi also formally requested a 4.8-billion-dollar loan from the International Monetary Fund (IMF), which the United States backs. During a visit to Cairo by IMF head Christine Lagarde at that time, civil-society activists mounted protests expressing anxiety that the negotiations with the IMF were taking part in secret and could burden the Egyptian people with an even greater debt load in the future.

“Egypt is in a transitional democracy and needs international support to grow. But Egypt already has more than 35 billion dollars in debt, most of this from an illegitimate and corrupt former Egyptian regime. Making the Egyptian people pay this debt is a punishment they don’t deserve,” Eric LeCompte, executive director of the Jubilee USA Network, told IPS.

“As the largest debtor nation in the region, instead of piling up more of a debt burden, the nation needs to make already unsustainable debts more manageable – and lending institutions should consider debt relief as a way to free up resources for the new Egypt.”

According to initial reports, U.S. negotiators are also putting together loan guarantees amounting to some 375 million dollars for U.S. investors interested in going into Egypt.

On Tuesday, the U.S. State Department announced the creation of “the largest ever trade delegation to the region”. That group, to visit Egypt Sep. 8-11, will include 100 senior executives from 50 U.S. companies and will be led by several top U.S. government officials, including Deputy Secretary of State Thomas Nides.

“Egypt’s potential for economic growth is unparalleled within the region,” Lionel Johnson, a vice president with the U.S. Chamber of Commerce, the world’s largest business lobby, said Tuesday in Washington. “The breathtaking pace and scope of the country’s transition to a more transparent and accountable governance will set the stage for even greater engagement by U.S. companies.”

Those companies currently confirmed to be taking part in the business delegation include large-scale military-services companies such as Boeing, Lockheed Martin and Raytheon; utilities such as General Electric; oil and chemical companies such as Dow, Cargill and Exxon Mobil; as well as a host of finance interests.

According to the U.S. Egypt Business Council, a part of the Chamber of Commerce, delegation members are likely to meet with President Morsi, Egyptian cabinet members and members of Parliament, as well as heads of political parties, business leaders and senior U.S. government representatives.

“During this critical phase of Egypt’s transition,” the U.S. Egypt Business Council states, explaining the rationale for the trip, “it is imperative that (U.S.) businesses have a profound appreciation of the nature and scope of recent developments, an understanding of Egypt’s economic and policy priorities and to underscore the continued commitment of the American business community to Egypt’s economic recovery and long-term development.”

According to official U.S. statistics, bilateral trade with Egypt amounted to around 8.2 billion dollars in 2011.