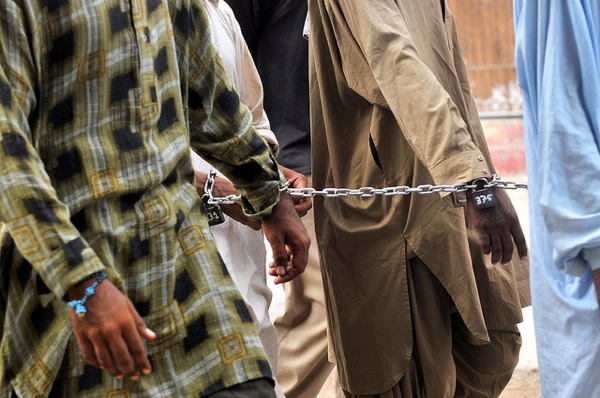 Rights groups denounced the decision not to pursue prosecutions of CIA officers who may have been responsible for the deaths of two prisoners in their custody. Credit: Fahim Siddiqi/IPS

WASHINGTON, Sep 1 2012 (IPS) - U.S. human rights groups have roundly condemned Thursday’s announcement by Attorney General Eric Holder that the Justice Department will not pursue prosecutions of Central Intelligence Agency (CIA) officers who may have been responsible for the deaths of two prisoners in their custody.

The announcement appeared to mark the end of all efforts by the U.S. government to hold CIA interrogators accountable for torture and mistreating prisoners detained during the so-called “Global War on Terror” launched shortly after the Al Qaeda attacks on Sep. 11, 2001.

For rights activists and for supporters of President Barack Obama, it was the latest in a series of disappointing decisions, including the failure to close the detention facility at the U.S. base in Guantanamo, Cuba. They had hoped Obama would not only end the excesses of President George W. Bush’s prosecution of the war, but also conduct a full investigation of those excesses, if not prosecute those responsible.

“This is truly a disastrous development,” said Laura Pitter, counter-terrorism advisor at Human Rights Watch (HRW). “To now have no accountability whatsoever for any of the CIA abuses for which there are now mountains of evidence is just appalling.”

“It completely undermines the U.S.’s ability to have any credibility on any of these issues in other countries, even as it calls for other countries to account for abuses and prosecute cases of torture and mistreatment,” she told IPS.

“Continuing impunity threatens to undermine the universally recognised prohibition on torture and other abusive treatment and sends the dangerous signal to government officials that there will be no consequences for their use of torture and other cruelty,” noted Jameel Jaffar, deputy legal director of the American Civil Liberties Union (ACLU).

“Today’s decision not to file charges against individuals who tortured prisoners to death is yet another entry in what is already a shameful record.”

In his announcement, Holder suggested that crimes were indeed committed in the two cases that were being investigated by Assistant U.S. Attorney John Durham but that convictions were unlikely.

“Based on the fully developed factual record concerning the two deaths, the department has declined prosecution because the admissible evidence would not be sufficient to obtain and sustain a conviction beyond a reasonable doubt,” he said.

The two deaths took place at a secret CIA detention facility known as the Salt Pit in Afghanistan in 2002 and at the notorious Abu Ghraib prison the following year. The victims have been identified as Gul Rahman, a suspected Taliban militant, and Manadel Al-Jamadi, an alleged Iraqi insurgent.

The two were the last reviewed by Durham, who had originally been tasked by Bush’s attorney general, Michael Mukasey, in 2008 with conducting a criminal investigation into CIA interrogators’ use of “waterboarding” against detainees and the apparently intentional destruction of interrogation videotapes that recorded those sessions.

In August 2009, Holder expanded Durham’s mandate to include 101 cases of alleged mistreatment by CIA interrogators of detainees held abroad to determine whether any of them may be liable to prosecution.

At the time, he also stressed that he would not prosecute anyone who acted in good faith and within the scope of the controversial legal guidance given by the Bush administration regarding possible “enhanced interrogation” techniques that could be used against detainees.

Such techniques, which include waterboarding, the use of stress positions and extreme heat and cold, are widely considered torture by human rights groups and international legal experts. As such, they violate the U.N. Convention Against Torture (CAT), as well as the Geneva Conventions and a 1996 U.S. federal law against torture.

Holder’s position was consistent with Obama’s statement, which human rights groups also strongly criticised, shortly after taking office in 2009 that he did not want CIA officials to “suddenly feel like they’ve got to spend all their time looking over their shoulders and lawyering” to escape prosecution and that he preferred “to look forward as opposed to…backwards”.

In his first days in office, Obama ordered all secret CIA detention facilities closed and banned the enhanced techniques authorised by his predecessor.

In late 2010, Durham announced that he would not pursue criminal charges related to the destruction of the CIA videotapes. Seven months later, he recommended that, of the 101 cases of alleged CIA abuse referred to him, only two warranted full criminal investigations in which CIA officers had allegedly exceeded the Bush administration’s guidelines for permissible interrogation techniques.

Now that Holder and Durham have concluded that prosecutions of the individuals involved are unlikely to result in convictions, it appears certain that no CIA officer will be prosecuted in a U.S. jurisdiction. Prosecutions of Bush officials responsible for authorising the “enhanced interrogation” techniques have also been ruled out.

In 2006, a private contractor for the CIA was successfully prosecuted and sentenced to six years in prison for beating an Afghan detainee to death three years before.

Some commentators suggested that these decisions, including the dropping of the two remaining cases, have been motivated primarily by political considerations. Indeed, HRW director Kenneth Roth wrote in an op-ed last year that “dredging up the crimes of the previous administration was seen as too distracting and too antagonistic an enterprise when Republican votes were needed”.

In a statement Thursday, the Republican chairman of the House Intelligence Committee praised Holder’s decision. Republicans protested Holder’s referral of the 101 cases to Durham in 2009.

But rights activists expressed great frustration. Holder’s announcement “is disappointing because it’s well documented that in the aftermath of 9/11, torture and abuse were widespread and systematic,” said Melina Milazzo of Human Rights First (HRF), which has been one of the most aggressive groups in investigating and publicising torture and abuse by U.S. intelligence and military personnel.

“It’s shocking that the department’s review of hundreds of instances of torture and abuse will fail to hold even one person accountable.”

Similarly, the Centre for Constitutional Rights (CCR) noted that Holder’s announcement “belies U.S. claims that it can be trusted to hold accountable Americans who have perpetrated torture and other human rights abuses”.

It said the decision “underscores the need for independent investigations elsewhere, such as the investigation in Spain, to continue”. Victims and rights groups including CCR filed criminal complaints against former Bush officials in Spanish courts in 2009, launching two separate investigations by judges there.