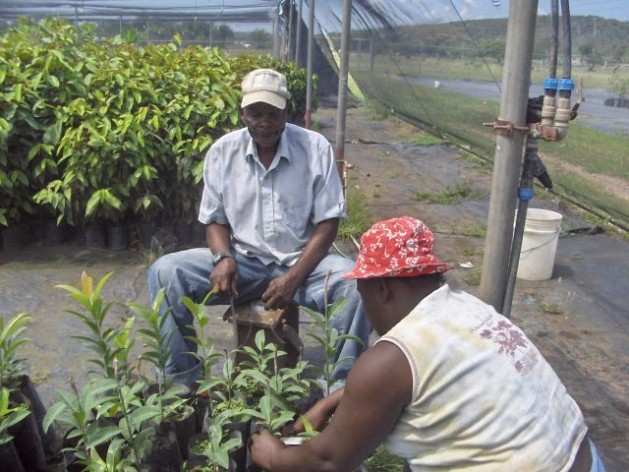 ST. JOHN’S, Antigua, Oct 19 2012 (IPS) - With the average age of a farmer in the Caribbean now 62 years old, there is growing concern that commercial agriculture is on a path to extinction – a dire scenario for a region already shouldering a massive food import bill.

“Our region is faced with an aging farmer population. Analysis has shown that within the next 10-15 years, the production of food within the region will be seriously compromised if we are unable to attract young persons to the agriculture sector,” Caribbean Community (CARICOM) Secretary General Ambassador Irwin Larocque said at the 11th Caribbean Week of Agriculture (CWA), which ends Friday.

“The challenge is to make agriculture more attractive to them and convince them that such a career move is worth it. To do so, we must provide improved access to training at all educational levels from primary to tertiary.

“We have to ensure that they have the access to resources, both financial and technical including access to technology. We have to ensure also that the market opportunities are available both for primary and value-added products, and finally we absolutely must change the image of agriculture and brand it as a sector filled with opportunity,” he added.

Larocque noted that soaring food prices are a continuing reminder that the region has no choice but to pay increased attention to food and nutrition security and cost-efficient sustainable production.

“The involvement of women and young people is critical if we are to influence the taste and preference of our households to consume domestically produced, nutritionally balanced foods which would also have the added benefit of safeguarding against chronic non-communicable diseases which are prevalent in the region,” Larocque said.

Michal Hailo, director of the ACP-EU Technical Centre for Agriculture and Rural Cooperation (CTA), told IPS that there are myriad challenges, but expressed optimism that they could be overcome.

“At a time when agriculture confronts great challenges such as feeding a rapidly growing human population while facing the negative impacts of climate change and natural resource degradation, it’s important to marshal the wisdom and energies of all stakeholders to chart the way forward,” he said.

“CTA, which also operates in Africa and the Pacific, is well placed to recognise and appreciate the uniqueness of the Caribbean Week of Agriculture. Indeed, in no other ACP region does the agricultural community benefit from such a high level of engagement with policymakers at the highest levels of government. This augers well for the future of agriculture in the Caribbean.”

Recent estimates indicate that about one billion people throughout the world are suffering from chronic hunger and malnutrition.

Prime Minister of Antigua and Barbuda Baldwin Spencer told IPS that experts have said that given the current rates of population growth, world food production needs to be increased by 70 percent by the year 2050.

“This is a staggering prediction which is exacerbated by issues such as climate change, increasing prices of food and imports, loss of biodiversity, natural disasters, dwindling resources and pressure from invasive species,” he said.

“Food security and nutrition security therefore become one of the most critical concerns for not only governments but for all of us.”

The prime minister noted that in the CARICOM region, the food supply is heavily dependent on imports, with a bill quickly approaching five billion dollars.

CWA, the main agricultural event in the Caribbean, was held under the theme ‘Celebrating Youth and Gender in Caribbean Agriculture.’ Over the course of the nine days, CWA drew policymakers and representatives of all key stakeholders in regional policies from across the Caribbean.

Dr. Raul Benitez, assistant director general of the U.N. Food and Agriculture Organisation and its representative for Latin America and the Caribbean, told delegates that one out of 10 persons in the region suffers from hunger and the number in the Caribbean is almost two out of 10.

“We must support strategies to tackle the root cause of hunger and malnutrition and ensure the exercise of the right to food,” he said.

The latest is the government of Trinidad and Tobago which announced an initiative to launch a Food Security Facility, the aim being to utilise land available in Guyana under the Jagdeo Initiative to produce a range of food crops.

“This is a prime example of what can be done to collectively use the region’s resources to engage in production integration and to increase the region’s food supply. A regional approach to agriculture production is the obvious solution to addressing our high food import bill and our food and nutrition security,” Larocque said.

“While it is not feasible to produce all our food, it is crucial that we target those categories of food imports that can profitably be produced in the region. A large segment of these imports go directly into tourism and the growing fast food sector. This is one area that we should be able to target but it requires that we arm ourselves with detailed information on the products involved, the form in which they are imported and the cost factors that have to be addressed.”