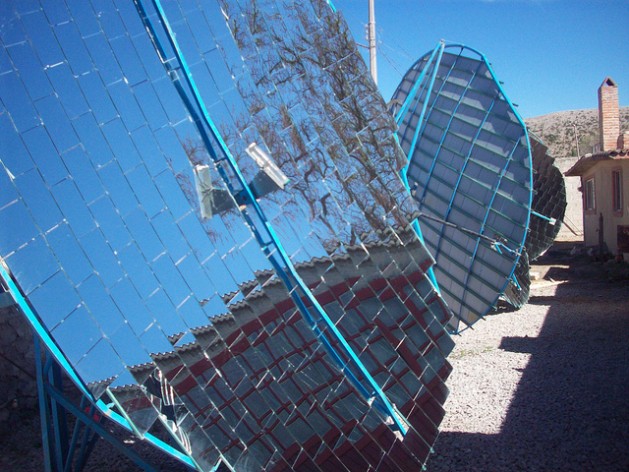 The Maguey Women's cooperative was the first in Mexico to use solar energy in food production. Credit: Emilio Godoy/IPS

QUEBEC CITY, Canada, Oct 10 2012 (IPS) - Cooperatives may face an immense challenge in garnering broader public recognition among consumers, but when it comes to chasing growth, they haven’t held back.

They are growing a rate comparable to their corporate competitors, and are outpacing them in the food and agricultural sector, a study released by McKinsey & Company reveals.

Cooperatives are developing at annual rate of 7.9 percent versus free market participants, who lead at 8.7 percent. While food and agricultural co-ops lead as an example, the study revealed that the insurance sector confronts obstacles in gaining access to capital and the right type of legislative environment that responds directly to the model.

The survey of 47 co-ops based in Asia, Europe, North America and the emerging markets upheld the cooperative movement’s self-perceptions about its ability to prioritise the interests of members over short-term financial gains. The results were matched with their analysis of 54 publicly listed companies.

Growth for small companies turned big can mean a break in their resolve to live up to their original standards. But cooperatives occupy a different territory of business, where the window for the measurement of growth is wider than the quarterly report structure that corporations are beholden to, said Juan Buchenau a senior financial sector specialist at the World Bank, at a panel during the Oct. 8-11 International Summit of Cooperatives here.

In the pursuit of a greater share of the market, cooperatives remain rooted in addressing their members’ needs, said Andrew Grant, the managing partner of McKinsey & Co. “If you’re better serving your members, you’re by definition meeting your market share.”

For 96 percent of the co-ops under review, growth was seen as essential to maintaining a diversified range of services. The findings illustrated differences in sources of growth, with co-ops propelled more by acquiring a greater market share, rather than by their entrance into rapidly rising markets with high growth potential.

“They are less nimble at placing their resources into the fastest growing part of their marketplace,” noted Grant at a press briefing. “They are less good at developing new products and services.”

Cooperatives are not unwilling to jump into the new markets, but rather are unable to swiftly release the capital to place their bidding, the McKinsey report stated. The principle of consensus that governs the cooperative model and puts the immediate interests of members first makes it difficult to cross the threshold.

The challenge and concern for cooperatives going forward is how to grow, without succumbing to the same type of responses exercised by other enterprises. For corporations, the pressure of a quarterly timetable means that “projects are thrown off the table” before they have been given a chance to fly, said Buchenau.

There needs to be more long-term patient capital within the free market, said Martin Sabia, the president and CEO of the Caisse in Quebec, at the panel on the economic order.

In identifying the weakness of cooperatives in penetrating emergent markets, the report stressed that cooperatives must play on their “natural strengths,” and build a following through the promotion of members’ needs.

But while this study demonstrates the economic power of cooperatives, Simel Esim, the chief of the International Labour Organisation’s Cooperative Branch, told IPS that it does not provide an accurate picture of how growth is understood within the movement.

“The McKinsey report is looking at traditional growth indicators, it’s not really addressing the co-op model in its uniqueness,” she told IPS. “For instance, co-ops have a longer life span, they employ workers, they have less worker turnover, move less from a local economy, they respond to local problems faster – these are the growth indicators that should be used.”

Instead of looking at the annual growth, she suggested assessing growth within a span of 10 to 20 years.

“We’re more interested in qualitative growth, rather than just numbers,” agreed Gianluca Salvatori, the CEO of Euricse, a research centre focused on cooperatives.

For Salvatori, growth in the qualitative sense means innovation, extending the cooperative experience in new sectors to respond to emerging needs, not merely responding to market indicators.

“The world they are trying to analyse and understand is far more complex,” Salvatori told IPS. “I don’t think growth in size is the main driver we have to implement as a strategy.”