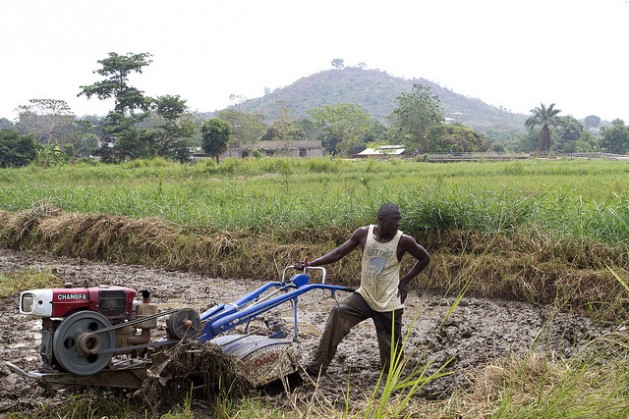 Emmanuel Kargbo, a 26-year-old farmer, pushes a motorised soil tiller recently given to his farming cooperative. Before he was trained to use it, it would take him more than twice as long to do it by hand. Credit: Damon Van der Linde/IPS

TORONTO, Canada, Oct 8 2012 (IPS) - Youth worldwide are facing limited job prospects in the traditional channels of employment, and in the midst of the job crunch, cooperatives are seeking ways to connect with this untapped pool of talent.

It begins with reserving a seat for young, future cooperative leaders this Oct. 8 to 12 at the International Summit of Cooperatives in Quebec City. About 150 youth from across the globe have been invited to represent their respective cooperative organisations.

It’s an opportunity for them to network with their peers and learn from their cooperative elders, said Stephanie Guico, the coordinator of the Future Leaders programe at the conference. While there will be special panels and events designed around them, the young leaders, from the ages 20-35, will be expected to bring their own contributions.

“I hope they’re going to bring a youth voice, innovative ideas, new perspectives. I hope they won’t censor themselves,” Guico told IPS. “There’s a lot to be gained from listening to youth who are more in touch with integration into the virtual area and ways of collaborating and communicating that are new.”

“I think there’s a generation now that has grown up with a certain type of cooperation through social media,” said Charles Gould, executive director of the International Cooperative Association, a non-governmental organisation that strives to shape global policy on behalf of cooperatives.

“It ought to make them more receptive to the cooperative model but they haven’t heard about it as a business model,” he told IPS.

No one knows more about creating connections through social media to answer a need than social entrepreneur Dev Aujla, who will be addressing the young leaders.

Aujla, founder of DreamNow, a charitable organisation in the business of turning ideas into social goods, collaborated with Rolling Stone Magazine’s “climate hero” Billy Parrish, a climate change activist, to write a book.

Parrish and Aujla’s paths crossed online, as Facebook friends who had never met but who shared similar principles, and dedicated their lives to mobilising youth to address their community’s issues. Their book “Making Good” serves as a game plan for youth interested in pursuing careers as social entrepreneurs.

The non-linear career path often comes with the territory if you become a social entrepreneur, and while it can be daunting, it is becoming an attractive option for those wanting a job that pays well enough and is rooted in serving the community, said Aujla.

And for those interested, the cooperative model can provide a base of support, because it doesn’t require a lot of a capital, and he said, with cooperatives “you can take any industry you can imagine and reinvent in a way that does good.”

The cooperative model speaks in the language that today’s generation has been reared on, through exposure to the dialogue on climate change and other environmental issues, “this whole generation knows they want to do something good and are just being turned on the idea,” adds Aujla.

But while youth have more access to information to educate themselves on the issues of today, the cooperative model isn’t all that familiar because it’s not always included in academic curriculum, said Guico, who completed a Bachelor’s Degree in International Development.

Social media can aid the cooperative movement in its efforts to connect with youth, but more education about how they can offer an alternative route for employment is needed.

“Realistically, it’s going to take a different presentation of the model and a better explanation of it,” said Gould.

Part of the issue Guico finds is that cooperatives operate in a more discreet manner than corporations. “We would have to impose ourselves before there’s a perception of our importance,” she said.

Another reason cooperatives are not on the minds of many youth is that schools do not delve deeply, if at all into what the model offers, Guico notes. “Most educational institutions are geared towards the capitalist model, anything that it is too complex, they tend to simplify or minimise it.”

Without the decision to explore cooperatives on her own, Guico might have continued to presume that cooperatives are only in the trade of making crafts and operating as small-scale agricultural enterprises, as she was led to believe.

In Canada, St. Mary’s University in Halifax offers a Master’s programme designed around the cooperative enterprise. The university is sponsoring Imagine 2012, a joint event of the summit, on cooperative economics that precedes it.

But the online programme, which gathers people from around the world, is targeted at cooperators entrenched in the movement. Most students have been working in the industry for 15 to 20 years and are seeking to learn new management tools and connect with other industry leaders.

“If people were only learning about it in the ways that are more typical to how (we’re) learning, I think our sector would be much further ahead,” said Karen Miner, the managing director of the Cooperative and Credit Union Management programme at St. Mary’s.

“We would be much better educated about the sector and even on ourselves. We have a large number of managers of co-ops that come from the traditional business background, myself included,” Miner told IPS.

Laure Waridel, an ecosociologist who will also be speaking to youth at the summit, also finds that not enough value is given to the social economy in university courses, particularly in management.

Waridel, who taught a course at McGill University in Montreal, sought to incorporate some lessons on social entrepreneurship in her lectures by inviting guest speakers working in the social economy to her lectures.

The cooperative model, which prides itself in embracing democratic and participatory values, where youth can help influence and shape the future of cooperatives, has a lot of room for growth and new members, Waridel said.

“The message to future leaders is that we need to prepare a transition for another economy,” she told IPS. “It’s very clear that the dominant model in which we are now is unsustainable.”