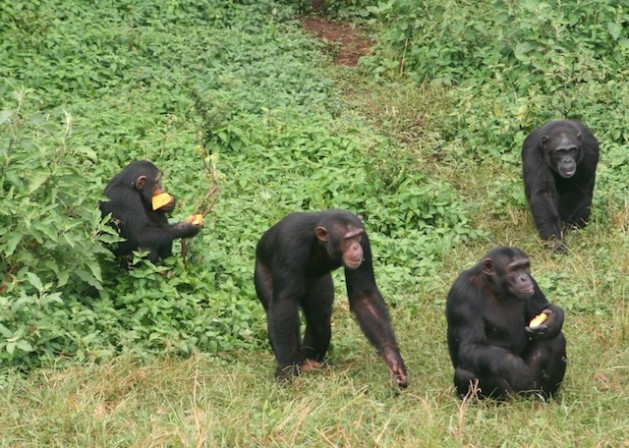 ALBERTINE RIFT REGION, Uganda, Oct 25 2012 (IPS) - Conservationists struggling to protect the remaining population of Ugandan chimpanzees have raised concerns that people around wildlife reserves in the west of the country have taken to eating the primates.

“There is now an issue of eating bush meat. We did not think Ugandans were eating primate meat but we are starting to observe that monkeys and chimps are being eaten. This is scary. The threat to their survival has been growing bigger,” according to Lily Ajarova who runs the Ngamba Chimpanzee Sanctuary, located on an island of the same name in Lake Victoria in the Albertine Rift region.

The sanctuary, which houses 48 primates rescued from human captivity, was set up with the help of the Jane Goodall Institute and is managed by the Chimpanzee Sanctuary and Wildlife Conservation Trust.

Decades ago, tens of thousands of chimpanzees roamed the thick tropical forests that then covered a vast tract of land in Uganda’s Albertine Rift region. The area covers the western arm of the Great East African Rift Valley from north-western Uganda to the extreme southwest, along the border with the Democratic Republic of Congo (DRC).

But according to the World Wildlife Fund, chimpanzees have already disappeared from four African countries, and are nearing extinction in many others largely due to deforestation and the hunting of the primates for bushmeat. Currently there are only an estimated 5,000 chimpanzees in Uganda, conservation officials say.

Most of the remaining chimpanzees in this country are protected in six main game and forest reserves in the Albertine Rift region, while others are trapped in forests owned by individuals.

Ajarova told IPS that although her team of conservationists had first noticed people eating primate meat in western Uganda two years ago, those engaging in the practice had mostly been immigrants or refugees from neighbouring DRC. It was rare for locals in this East African nation to eat primate meat, she said.

“There are many other parts of the world where primate meat is eaten but this had not been happening in Uganda. We began witnessing this over time. It has been developing slowly and we ourselves only got wind of it when we were in the field two years ago,” she said, adding that it was now “an emerging problem.”

The recent arrivals of immigrants from the DRC have created a shift in the population balance of the area and have had an effect on local culture, she said. In July the Minister for Relief, Disaster Preparedness and Refugees Musa Ecweru said that Uganda was struggling to feed the large number of Congolese fleeing the fighting in North Kivu Province in neighbouring DRC. There are an estimated 16,000 Congolese refugees in western Uganda.

“There are lots of Congolese refugees in the area and they may have influenced the local people to eat monkeys and chimpanzees,” Ajarova said. “This has not been a part of Ugandan culture in the past, but now it is becoming an issue. We have found that the habit is now rife in the whole (western) region. It is rampant in almost all the villages we visit.

“We have from time to time seen villagers carrying carcasses of monkeys and, on occasion, chimps,” Ajarova said.

Officials also believe that people have taken to eating primates because the Albertine Rift region is poverty-stricken and people mostly depend on forest resources for survival, as they cannot afford to purchase meat.

“People are desperate, they are poor as this is an underdeveloped region. They mostly depend on forest resources, including game meat, and this may have forced them to resort to eating primate meat,” Ajarova said.

Experts are now worried that the new trend could lead to a possible outbreak of Ebola, a haemorrhagic fever that is often fatal, which is believed to be transferred to humans through contact with an infected animal.

“This is a serious problem. Any meat that is eaten has to pass through proper veterinary inspection, even if it is from farms. People eating primate meat run a risk of getting infected with zoonotic diseases, including Ebola,” said Andrew Seguya, the executive director of the Uganda Wildlife Authority.

“There is no Ugandan tribe that traditionally eats primate meat, but there are many Congolese refugees in that area and the Congolese may have spread the habit to locals,” he said.

“Ebola is spread through direct contact and it’s thought that these primates are carriers of the disease and may transmit it to humans through other ways, including faecal matter. There is even a school of thought that AIDS might have been transmitted from primates,” Seguya, a veterinary surgeon, told IPS.

The western district of Kibaale, in the Albertine Rift region, was hit by a suspected Ebola epidemic in July. Health officials are yet to confirm that it was an Ebola outbreak. But according to media reports 17 people died.

Meanwhile, Ajarova said efforts are being made to change people’s attitudes towards eating primate meat through education programmes and the setting up of animal-rearing projects among villagers.

“We are telling people to stop eating primate meat, informing them that it is dangerous to their health as they will get diseases like Ebola. This is one of the key messages in our education programmes,” she said.

“We also use FM radios to pass on conservation messages to the communities. These reach out to large numbers of people at one go,” Ajarova said.