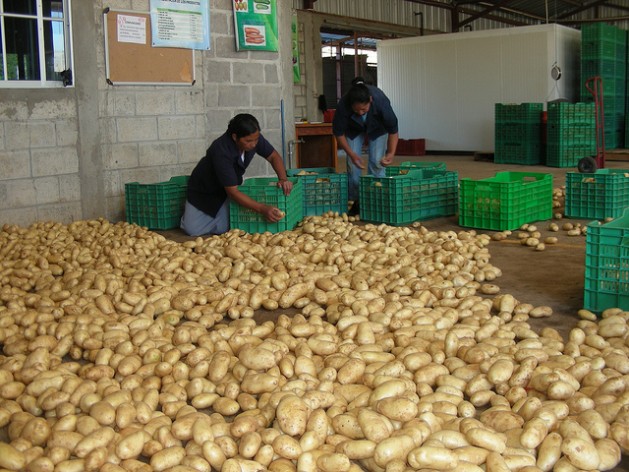 Cooperative members at the APROHFI wholesale centre in Honduras select the best potatoes to sell to supermarkets. Credit: Thelma Mejía/IPS

TORONTO, Canada, Oct 5 2012 (IPS) - The banner year for the global cooperative movement is winding down into its last months, but its leaders have echoed a resounding message: cooperatives, a values-based business model, can usher a transition to a more socially responsible economy.

This message will be at core of the International Summit of Cooperatives, a gathering of more than 2,000 participants active in the cooperative movement, to take place in Québec City from Oct. 8 to 12.

With 2012 designated by the U.N. as the International Year of Cooperatives, Monique Leroux, the CEO of Desjardins, the largest cooperative financial group in Canada, thought it was time to bring her dream of launching a summit into action.

“We want to use the summit as an opportunity to make sure the world in general, and governments have a better understanding of the cooperative movement,” said Leroux. “We need to do a better job in promoting who we are.”

Desjardins partnered with the International Alliance of Cooperatives, a non-governmental organisation that advocates on behalf cooperatives, to create a venue where new networks and solutions to propel the movement forward can be forged.

The shift to a new paradigm for the economy is now underway, and the time is ripe for cooperatives to demonstrate their value because there is an upswell of disenchantment with the economy as it stands, said Charles Gould, the executive director of IAC.

Cooperatives tend to arise in response to an unaddressed need in the community. The core values that underpin the cooperative model – self-help, democracy, equality, equity and solidarity – guide the way decisions are reached, Gould added.

The values bear the implication that the interests of the communities served will be factored into any business calculation. In the face of the financial crisis, the cooperative model proved its resilience, because by design the board is accountable to all its members, said Leroux. The one-member, one vote rule means that the interests of the largest shareholders do not trump the rest.

“We believe that by 2020, by the end of this decade, it’s conceivable that the cooperative can be the fastest growing form of enterprise in the world,” he told IPS. “We’ve been asking cooperatives and our members what would have to change for that to happen.”

Gould identified several areas that will help build momentum for the movement, and bolster its profile as a viable alternative to the classic setup of a corporation.

For one, cooperatives need new forms of capital to grow that are aligned with their values and design. The summit marks an opportunity for Desjardins and its partners to share their innovations in creating new financial products, credit services designed to reflect the context of the community served, said France Michaud, the communications supervisor at Developpement International Desjardins (DID).

Aside from raising capital, cooperatives also have to do a better job at promoting and invoking their identity, making the model and the values it stands for known to the public, Gould noted. Brands like Ocean Spray and Sunkist are household names but are not always tagged as examples of cooperatives.

There are several misleading perceptions about cooperatives that downplay their importance in the economy, said Stephanie Guico, the programme coordinator of the Future Leaders Program at the summit. One is the view that they belong to the past, another that they are mainly poor people’s organisations.

Poverty alleviation is central to the mandate of many cooperatives, but people often don’t realise they are businesses concerned about their sustainability, Guico added.

For the cooperative model to thrive, the legislative and regulatory landscape has to adjust itself. “There are many countries where the general business regime is designed around the corporate construct, because it has been such a dominant model,” Gould told IPS. “We have to make sure we’re not subject to restrictions that were imposed to prevent problems other business forms are subject to.”

Gould noted that the governments of China and Iran are expressing interest in the cooperative model, and that these countries are on his list to watch for growth. “Some of these countries recognise the need to diversify from state-owned enterprises and see how the global economy has changed,” he said. “But don’t want to move to capitalist models…and are intrigued that the cooperative model could be a way of getting people to step up in a self-help way.”

In Quebec, the groundwork for an alternative economy is being sown through a collection of seemingly small efforts led by members of the global cooperative movement, said Laure Waridel, an eco-sociologist, who has been invited to speak at the summit.

She cited one local organic farm as an example, because it has opted to subsist with the help of its customers, who are willing to pay an advance for its share of the harvest.

Waridel, also recognised as a pioneer who helped bring the fair trade movement to Canada, has been studying the efforts of people in the countryside of Québec to create a sustainable livelihood.

“What I’m interested in is to find the connecting dots between many initiatives in Québec that are seen as marginal,” she told IPS. “You put them together, you see that there is a proposal for another economy.”