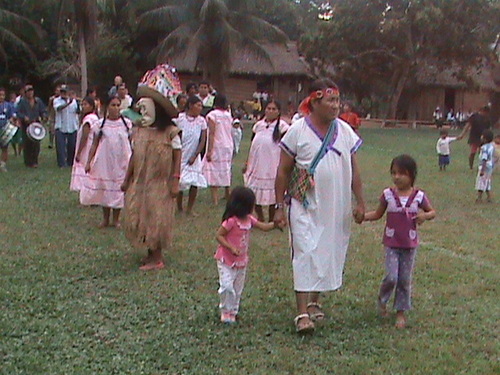 The Mapajo Indigenous Community Ecotourism Company “is the result of a decision reached by the women and men of the Tsimane community, to have a source of income in order to educate our children, because we saw that it was impossible to do so with our small-scale agricultural production,” one of the community’s leaders, Lucía Canare, told IPS.

The active participation of women in the ecotourism project is a big step for this native community, where gender roles have traditionally been strictly differentiated, decision-making has been the domain of men, and polygamy is a waning but still persistent custom.

The ecotourism company is named in honour of the giant Mapajo tree, a sacred tree that grows 40 metres high and provides protective cover for many other species of trees used for their wood in the Amazon rainforest.

“We work in our gardens, and then we take turns working in our tourism company,” Canare said. “That way we all benefit, and we all take care of our other work too. We feed our families with what we grow, and we earn an income from ecotourism, even if it only covers the cost of school supplies and not much else.”

The women in the community received training in gastronomy and take turns working as waitresses, cooks, drivers or guides. Canare is head of the kitchen in the indigenous lodge, where traditional dishes are served based on food grown in the family gardens planted in small clearings carved out of the jungle.

Rice, cassava, plantains, peanuts, beans, chilli peppers and sugar cane are grown in the gardens, which the women tend to early in the mornings, after serving their families breakfast. The men, meanwhile, bring in food from hunting and fishing. To all of this are added the fruits of the rainforest.

In Rurrenabaque, the most inhabited of the four municipalities where the Tsimane Mosetene (also known as Chiman Moseten) people live, it is clear how weak the connection is between these communities and the outside world.

Although the town is located just 410 km northeast of La Paz, it takes between 12 and 18 hours to make the trip by road. And it takes another two to three hours to get to Asunción del Quiquivey by boat, along the river.

The village, which is near the banks of the Quiquivey River, a tributary of the Beni River, is home to just under 300 people.

Rivers are a central part of the life of the Tsimane and Mosetene people, two ethnic groups that joined together in 1991 in the Tsimane Mosetene Regional Council (CRTM), which groups 22 native communities made up of some 2,000 people.

In 1997, life changed in Pilón de Lajas, the district where the Tsimane and Mosetene people live. The CRTM achieved one of their chief demands: the official declaration of their territory as a Tierra Comunitaria de Origen or communally-owned native territory, which gives them full rights over their 4,000 square kilometres of rainforest.

It took 10 years before current President Evo Morales finally formally granted the CRTM collective title to their land, which has enabled them to create and strengthen productive initiatives, such as the harvesting and use of jatata palm fronds.

The Tsimane Mosetene Indians have always lived in harmony with nature. Few of them leave the area to live elsewhere, and food insecurity is not a problem, as their communities are located in the biosphere reserve’s buffer zone where they use the natural products around them to barter and trade with their neighbours living at higher altitudes.

Traditional roofing panels made by weaving jatata palm fronds are among the products made for other population groups, Clemente Caimani, the 44-year-old chief of Asunción and vice-president of the CRTM, told IPS.

Women also produce craft products on their looms, and make mats, baskets and “maricos” – traditional straw bags that the people of Pilón de Lajas carry around with them, full of the articles of everyday life.

In 2010, the CRTM was awarded the international Equator Prize, in recognition of the communities’ efforts to preserve the biosphere reserve and improve the lives of the people of Pilón de Lajas through ecotourism and sustainable development projects.

“We have managed to reduce poverty in our territories, by means of productive projects,” said Caimani, who received the award in New York.

The 20,000 dollars in prize money, he said, were used to strengthen initiatives like the ecotourism project in Asunción, the production and use of jatata palm fronds, and the production of cacao, which improve the lives of local communities while preserving the natural habitat.

Caimani acknowledged that the roles of men and women are strictly defined in
Tsimane Mosetene society.

“Women weave, knit, dye, and make the ‘maricos’. Men would be seen as women if they did those activities, and women can’t make arrows or hunt, for example,” he said.

“But we are together in the effort to improve our lives and those of our children, in harmony with nature, which is leading to positive changes in our families,” he said.

“We don’t plant on large extensions of land, we just grow enough to feed ourselves,” said Canare, a 46-year-old mother of 12. “The jungle is a store for us. It gives us food, the meat we need, the fruits of the forest, and medicinal plants.

“That is why we protect it, and we are opposed to the government’s undoing of our work through megaprojects; instead we are asking it to help us continue protecting our territory,” she said.

She said that in Asunción and other areas of Pilón de Lajas, threats from mining, oil and infrastructure interests are constant.

“We have experienced many difficult situations, and at this moment our territory is threatened by megaprojects of the current government, such as the Bala dam and oil drilling,” Canare said.

The Bala hydroelectric dam, a project that the government revived in 2011, would flood the natural access to the native communities’ territory, and would leave some 1,000 local families – who are also threatened by growing oil industry activity in natural gas-rich Beni – without land.

The people of Asunción say the projects endanger their future, unlike other development initiatives, such as the Mapajo ecotourism company, which they have proudly run since 2000.