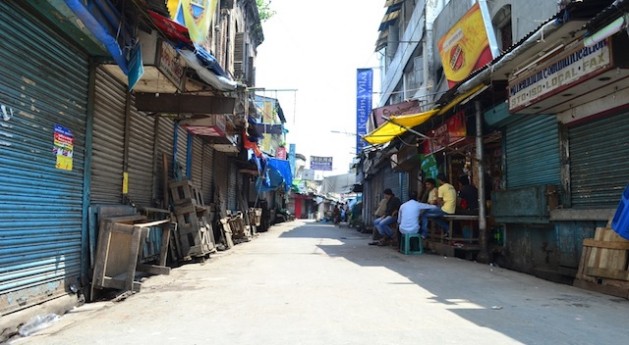 Small retailers in Kolkata keep their shops closed in protest against FDI in retail. Credit: IPS

KOLKATA/NEW DELHI, Oct 2 2012 (IPS) - Thousands of shopkeepers in Sir Stuart Hogg Market in Kolkata, the business hub of eastern India’s biggest city, are all talking about one thing: what they will do when multinational companies invade their ancient marketplace.

Also known as the New Market, this shopping centre was opened in 1874 when Kolkata was still the capital of British India, and has since been a haven for local vendors and traditional retailers.

Now its streets are abuzz with questions about the impact of Prime Minister Manmohan Singh’s recent decision to pass reforms that will allow 51 percent of foreign direct investment (FDI) in multi-brand retail, effectively opening India’s many doors to giant supermarket chains and other multinational retailers.

Singh’s government says its decision to allow investment in the country’s retail, aviation and broadcast sectors is a bid to revive growth and confidence in Asia’s third largest economy.

But local retailers feel it will pave the way for big brands like Walmart, Tesco and Carrefour to exploit the huge Indian consumer market, currently estimated at roughly 500 billion dollars.

“I am absolutely against it (the reforms) – it will kill us,” said Rajkumar, a retailer in south Kolkata’s Dhakuria whose cramped shop boasts every stationery product imaginable.

“When a Spencer’s supermarket (a leading retail chain in India) came up in our neighbourhood South City Mall some years ago it definitely hit our retail shops since we have no sprawling space to (allow customers to) cart purchases in trolleys and shop in style. Now FDI in retail will be a final blow,” he said.

Besides opposition groups like the Communist Party or the Hindu nationalist Bharatiya Janata Party (BJP), the announcement last month also sparked a strong backlash from the ruling coalition’s second biggest constituent, the Trinamool Congress, which announced withdrawal of support for the Singh government over the issue and ordered all its central ministers to resign.

The Confederation of All India Traders (CAIT) are also extremely concerned.

According to Anil Sharma, CAIT’s FDI research committee convenor, a few retailers might prosper as result of the reforms but many others will perish.

“The government must clarify how (the reforms) will impact traders, farmers, small and medium enterprises (SMEs) and consumers,” Sharma told IPS. “There should be a regulatory authority with enough teeth to ensure that small traders do not suffer and that (adequate) cold storage facilities and warehouses are constructed to ramp up the infrastructure.”

According to Sharma, the government’s prediction that FDI in retail will create around 10 million jobs in three years, with four million jobs created directly and the rest in backend logistics, is “highly imaginative”.

“If four million jobs are to be created in India in three years, even Walmart, which has the largest average (number of) employees per store, will need to open over 18,600 supermarkets in India, which means 644 retail stores in each of the 53 metropolitan cities where they are permitted to operate.

“Walmart’s global operation is capital intensive. They will completely transform the supply chain and it will be no good for jobs,” Ghosh, a professor at the New Delhi-based Jawaharlal Nehru University, told IPS.

“There will be a negative impact on the employment scene, since the majority of the 40 million people (currently) employed in retail trade in India are self-employed, and they will not be able to compete with large supermarkets.

“What we can demand from the government now is the (creation) of infrastructure to store post-harvest produce. There should be more cold storage (facilities) and warehouses.”

Deputy Chairman of India’s Planning Commission, Montek Singh Ahluwalia, a strong advocate of the reforms, said in an interview with the CNN IBN channel on Sept. 24, “We are running a very inefficient retailing system in which the farmer gets very little and the consumer pays too much.

“If you want the modernisation of the retail sector, you want upward pressure in the quality of employment. Modern retail produces better quality jobs. If the labour growth is going down to one percent or so and GDP is growing at eight to nine percent, jobs will be created in many different sectors,” he argued.

According to Rajkumar N Dhoot, president of the Associated Chamber of Commerce and Industry of India (ASSOCHAM), the decision to allow FDI in multi-brand retail will also improve India’s image in the eyes of foreign investors.

“Today, we live in a globalised environment. We all know how precarious the global economy is and how our own exports, both goods and services, are being hit in the western markets,” he said in reference to the need for increased FDI.

Even some local shopkeepers in New Market seem unfazed by the imminent arrival of massive competitors.

“I do not think a Walmart can completely kill us,” Subir Saha, who runs a crockery and utensil shop in New Market, told IPS. “When the shopping malls came up in the city (they) did affect our business, but we survived it and are still here.”

Farhad Ali, a garment-store owner, echoed his sentiment: “People come to us for many reasons, from low price tags to unique collections,” he told IPS.

But experts claim the belief that huge retailers will not destroy the local market is optimistic.

According to Ghosh, “In the beginning the situation will be better (for some job-seekers and consumers). But this will be part of a strategy by these companies to establish themselves in the market. Once it is done, they will start doing the unpleasant things,” she said, citing examples of Thailand and Malaysia, whose local retailers and farmers were hit hard by the entry of multinational retailers into the domestic market.