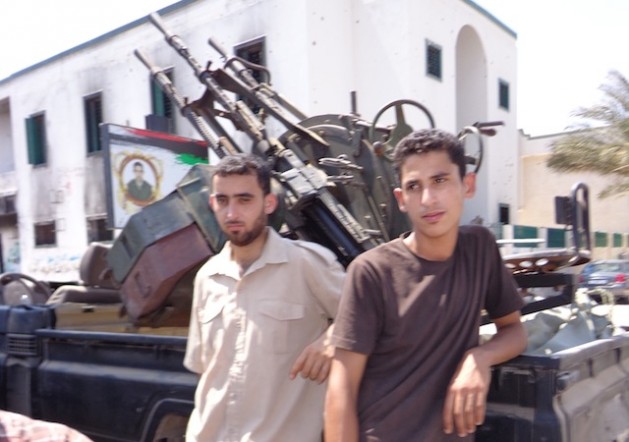 CAIRO, Oct 6 2012 (IPS) - Civilians in the town of Bani Walid, 170 km south-east of Tripoli, are facing a humanitarian crisis as Libyan security forces lay siege to the stronghold of Muammar Gaddafi supporters, cutting off water, food and medical supplies.

Local doctors told Amnesty International that on Oct. 4, three vehicles carrying medical supplies, oxygen, and medical personnel were prevented from reaching the city by a group of armed men, who set up a checkpoint on the main road from capital Tripoli.

Residents said that vehicles carrying petrol, water and food supplies from the capital had also been turned back at the same checkpoint in the previous four days.

“These people have given Libya a lot of problems and the town has been infiltrated by foreign elements, but this will come to an end soon when our men move in,” Khaled Hamsha, a member of the Supreme Security Committee (SSC), an amalgamation of Libyan security forces and militias, told IPS.

The military build-up follows the death of Omran Shabaan, a militia member from Misrata town 150km east of Tripoli, who helped capture Gaddafi last year in October. Shabaan died in a Paris hospital some weeks ago shortly after his release after being captured by Gaddafi loyalists in Bani Walid in July.

His death was allegedly the result of torture and a gunshot wound he sustained during his capture. He was detained when he and several collegues were sent to Bani Walid to help secure the release of some Misratan journalists who had also been captured by Gaddafi supporters.

There is concern now over excesses on the part of militia men. “It is worrying that what essentially should be a law enforcement operation to arrest suspects looks increasingly like a siege of a city and a military operation,” said Hassiba Hadj Sahraoui, deputy director for the Middle East and North Africa at Amnesty International.

“Libyan authorities should ensure that maximum restraint is exercised in any use of force, which should be proportionate to the purported objective of arresting suspects. Movement to and from Bani Walid should not be arbitrarily constrained, and in particular all medical and other essential
supplies should be allowed to reach the city without any impediments,” Sahraoui added.

The bad blood between Misrata and Bani Walid goes back to the revolution when people from the two towns fought on different sides. Misratans fought to overthrow Gaddafi’s regime and fought against Bani Walid loyalists to Gaddafi.

Following the kidnapping of a number of Misratans in Bani Walid, which Bani Walid loyalists say is in retaliation for the abduction of hundreds of men from their town, a number of bloody confrontations between the two cities were narrowly averted at the last minute following high-level government intervention.

But following Shabaan’s death, Libya’s President of the General National Congress (GNC) Muhammad Magarief vowed that those responsible for the Misratan revolutionary’s death would be captured and brought to justice. He added that if Bani Walid officials failed to hand the men responsible over, military force would be employed against the town.

More than a thousand soldiers from revolutionary brigades from across Libya, heavily supported by Misratan brigades, have joined the National Army at four camps surrounding the Gaddafi stronghold with commanders preparing for a military assault. Residents of the besieged city are begging for international intervention.

A petition was circulated around the city last week asking the U.N. Security Council to convene an emergency meeting and intervene immediately to protect the civilians in the town.

According to The Libya Herald the petitioners claimed that pro-government armed militias were trying to indiscriminately kill large numbers of people in Bani Walid, because of the city’s history in support of Gaddafi. They reported bombing on civilian neighbourhoods on Oct. 1 with no regard to the lives of unarmed civilians.

However, many in Bani Walid remain defiant and have warned that they would fight to the last man. Last Friday large numbers of protestors rallied against the Libyan government’s demands that the men responsible for Shabaan’s death be handed over. They also called for the release of hundreds of Bani Walid residents held without trial in detention centres in Misrata.

Amnesty International says many continue to be detained without being charged or put on trial across Libya, and have been tortured or otherwise ill-treated.

The International Centre for Prison Studies (ICPS) says Libya holds the highest number of prisoners held without trial in the world at nearly 89 percent. Foreign prisoners, many of them from sub-Saharan Africa, account for nearly 15 percent of Libya’s prison population, and women for just over 2 percent.

Nasseer Al Hammary, a researcher with the Libyan Observatory for Human Rights said that the human rights situation in Libya now was far worse than under Gaddafi.

“The abuse and mistreatment of prisoners in detention centres around the country, many of them run by militias, is an ongoing problem. At a conservative guess, more than twenty people, have died from abuse since the end of the revolution with many others tortured and beaten,”Al Hammary told IPS.