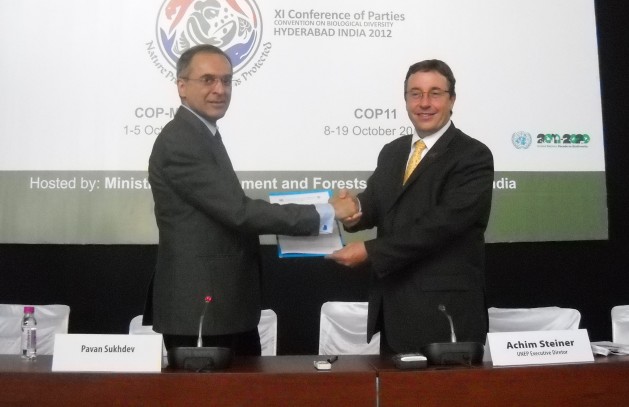 HYDERABAD, India, Oct 19 2012 (IPS) -  “With more than 60 percent of the world projected to be urban by 2030 why not prepare for it and build cities that include biodiversity preservation into planning?” asks Kobie Brand of ICLEI Local Governments for Sustainability in Cape Town, South Africa.

The existence of ICLEI, an association of  the world’s cities that are committed to sustainable development, suggests that the value of greening urban centres is gaining ground. ICLEI’s  Cities Biodiversity Centre in Cape Town works closely with the United Nations Convention on Biological Diversity (CBD).

Global urbanisation will have implications for biodiversity and ecosystems if current trends continue, with knockout effects on human health and development, according to a new report by the CBD that concluded its 11th Conference of Parties (COP 11) in this south Indian city on Friday.

‘The Cities and Biodiversity Outlook’ report released at COP 11 is the world’s first global analysis of how projected patterns of urban expansion would impact biodiversity and crucial ecosystems.

The report, drawing on contributions from 123 scientists worldwide, says that over 60 percent of land that is projected to become urban by 2030 is yet to be built. This, according to Prof. Thomas Elmqvist of the Stockholm Resilience Centre and scientific editor of the report, offers an opportunity for low-carbon, resource-efficient urban development.

“Cities need to learn how to better protect and enhance biodiversity, because rich biodiversity can exist in cities and is extremely critical to people’s health,” said Elmqvist.

Even backyard gardens harbour significant biodiversity. A study of 61 gardens in the city of Sheffield, Britain, found 4,000 species of invertebrates, 80 species of lichen and more than a thousand species of plants.

“City folks love nature but just take it for granted; they do not understand the importance of biodiversity; so in towns and cities we are encouraging and awarding people who are protecting biodiversity, including frogs,” Julia Hennlein, 21, told IPS. Hennlein, a student from Germany, attended COP 11 as part of a youth delegation.

“Cities are where innovation and governance tools are generated, so urban centres are in a better position to take the lead in biodiversity preservation,” said Braulio Ferreira de Souza Dias, executive secretary of the CBD. “The way our cities are designed, the way people live in them and the policy decisions of local authorities will define, to a large extent, future global sustainability.”

Not everyone has a positive outlook on urbanisation and there are misgivings in India, host of COP 11.

“Unless fundamental changes are made to the current development paradigm, urban areas will continue to see huge migration and India is an example,” Ashish Kothari, an internationally known Indian environmental activist, told IPS. “Very little is being done to regenerate villages and where this is done, migrants have returned home from the cities.”

New Delhi, India’s capital, and Mumbai, the country’s main business hub, have been ranked 58 and 52 respectively among 95 cities worldwide by a U.N. Habitat report released this week. Poor environmental conditions and pollution are some of the major reasons for their low ranking.

“Urbanisation in the present unsustainable avatar also has a major impact on rural areas, reshaping livelihoods, lifestyles, patterns of consumption and waste generation,” says Helene Roumani, coordinator for Local Action for Biodiversity  from Jerusalem attending the two-day Cities for Life Summit running parallel to the COP.

Urging local governments to understand better the role of ecosystem services in urban planning, Achim Steiner, executive director of the U.N. Environment Programme, emphasises that large and small urban groups depend on ecosystem services for their food, water and health.

“With environment and development traded off against each other, one-third of the population could soon be living in water-stressed areas,” said Steiner at the release of ‘The Economics of Ecosystems and Biodiversity for Water and Wetlands’ report, an initiative of the Ramsar Convention Secretariat.

According to the report, the world lost half of its wetlands in the 20th century.

“Wetlands do not just manage pollution but promote better health in many ways and coastal cities in Asia are particularly under great pressure from livelihood demands,” Davidson said. “The marine coastal areas are being seen as a waste area and encroached into for various livelihood sources.