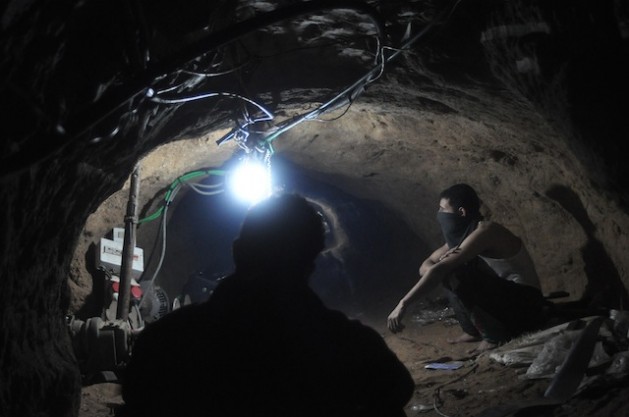 With their rights now on the backburner, Palestinians in Gaza look to tunnels as their only effective outlet to the world. Credit: Eva Bartlett/IPS.

JERUSALEM, Oct 7 2012 (IPS) - The annual debate has just wrapped up and, already, the certainty is that if last year Palestinian statehood auspiciously dominated the international agenda, this time, the issue vanished from the United Nations General Assembly (UNGA), and will vanish even further from world affairs.

When Palestinian Authority (PA) President Mahmoud Abbas looked down on the General Assembly plenum a fortnight ago, though the hall was packed, he probably felt lonely. He knew his would be the sole address devoted to the cause of an independent Palestinian state in peace alongside Israel.

For the umpteenth time, Abbas depicted how Israel’s settlement enterprise in the occupied Palestinian territories renders year by year a two-state solution to the conflict more unattainable – to no avail.

His speech was similar in essence to the one he’d delivered exactly one year ago at the same place – except that this time, his bid was limited to gaining non-member state status, not full statehood recognition at the U.N. Security Council.

Abbas’s statehood bid was shelved as soon as it was introduced. The U.S. and its Western allies had pressed the Security Council and the General Assembly not to proceed with the largely symbolic vote.

Then, prodded by the U.S., the reason advanced by the Security Council powers was that peace moves with Israel, not a unilateral move, had to be given another chance. As consolation price, a month later, Palestine gained UNESCO membership.

A year on, what Abbas drew from the General Assembly was the kind of almost casually apologetic words of recognition and appraisal that the Palestinian issue garners at every global forum.

The General Assembly was the first and leading power supporting a two-state solution. In November 1947, it voted the Partition Plan between a Jewish state and an Arab state in Mandatory Palestine.

But ever since the historic General Assembly vote, quasi-universal, though insipid, pledges and rubberstamp commitments to Palestinian statehood have been dutifully distilled by UN member states.

Surely, he submitted to the ritual. “We have to (…) negotiate together, and reach a mutual compromise,” he urged emphatically.

But he allocated two minutes of his speech to the Palestinian question at best, demonstrating thereby (if anyone needed such demonstration) that literally, wording an ironclad resolution on the future of Palestine will remain punctuated by a big question mark.

Netanyahu had heard U.S. President Barack Obama’s address. Albeit the usual hymn – or was it a eulogy? – to the bygone dream of a negotiated two-state solution which was wrapped in a single paragraph, Obama didn’t conceal the fact that, right now, diplomacy is urgently needed – but not between Israel and Abbas’ Palestinian Authority.

So, Netanyahu dedicated his address to calling for a “red line” on Iran’s nuclear enrichment programme – this, in order to “prevent war”.

With noises of war against Iran permeating the General Assembly debates (though Obama had earlier pledged “to block out any noise that’s out there”), no wonder that the only recipe to the Israeli-Palestinian stalemate consisted of rueful expressions of solidarity with the Palestinians’ predicament.

There were times, not that long ago, when the Israel-Palestine conflict was the centre of gravity in international affairs.

Last winter, three rounds of exploratory talks in Amman in Jordan, between Israeli and Palestinian delegates failed to bring any result.

Palestine has sunk into oblivion, orbiting around an Israeli-imposed sphere of “conflict management” rather than gravitating toward U.S.-led “conflict resolution”. A “low-intensity conflict”, it’s therefore been relegated to the backburner of world concerns.

The dubious ‘Headline News’ mantra, “when it bleeds, it leads”, has diverted public attention from the Israel-Palestine conflict.

Far more blood is spilled in other fracture lines of the area – between Shias and Sunnis, between liberals and Islamists, between Arab dictatorships and their pro-democracy citizenry, between Jihadist and all the mentioned-above parties.

The truth is, if one compares it with the upheavals convoluting the Arab Muslim world – in Syria notably, but also elsewhere in the MENA (Middle East and North Africa) region – the Israel-Palestine conflict doesn’t appear that malignant.

And, far more blood would be spilled were Iran’s nuclear programme be tackled belligerently.

And yet, without renewed focus on the Israel-Palestine conflict, the U.S. and its Western allies (including Israel) will have a hard time convincing Arab leaders, Russia and China – themselves extremely perturbed by Iran’s nuclear programme – that a unified and more muscular approach must be adopted.

Were it to prod Israelis and Palestinians to re-engage in negotiations, the U.S. could perhaps sway public opinion, absorbed by a deep pro-Palestinian sentiment from the anti-U.S. feelings of humiliation pervading many Arab countries, as last month’s violent assaults on U.S. legations in Libya and Egypt again exposed.

That, in turn, could persuade Arab allies, as well as Russia and China, to adhere to increased pressure on Iran. But such U.S. endeavour will have to wait for a new president.

Moreover, Netanyahu’s “red line” argument would probably be more convincing were he to draw a line on his own policies in the occupied Palestinian territories, policies which traditionally elicit worldwide censure.

But why would he, for instance, be prodded to introduce a moratorium on settlement construction similar to the 10-month freeze he reluctantly agreed to impose in 2010?

After all, didn’t he implicitly agree at the U.N. that until next year’s spring or summer, Israel would allow diplomacy and sanctions to run their course. Netanyahu predicted that only by then Tehran would complete the threshold stage of its uranium enrichment.

Besides, he might be inclined to call for Israeli elections in February.

Red lines, deadlines, are like all lines: politicians like Netanyahu are seasoned enough in the art of ‘tight-roping’ a thin line. His is between war with Iran and peace with Palestine. He could still walk both. But as long as Iran’s and Syria’s leaders walk their own fine line, why should he? And so, the Israel-Palestine conflict will remain on the sidelines, in limbo.