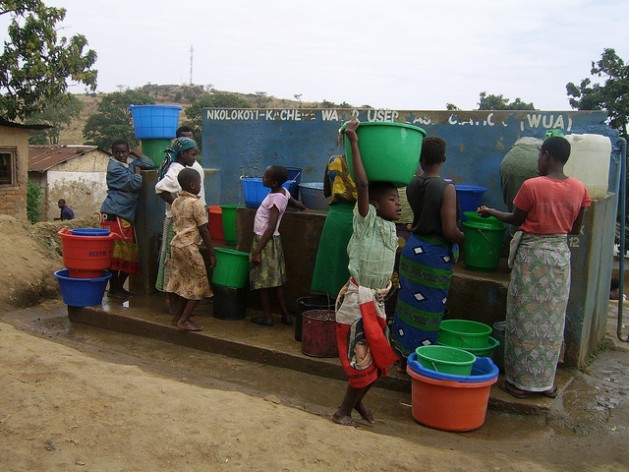 GENEVA, Nov 18 2012 (IPS) - Organisers of this year’s World Toilet Day, which falls on Nov. 19, are using the slogan ‘I give a shit – do you?’ to break the silence around the crucial issue of sanitation and remind the international community that 2.5 billion people around the world don’t have access to clean and private toilets.

Improving these figures, and achieving the Millennium Development Goal (MDG) of halving the number of people without basic sanitation by 2015, needs a change of mindset and strong political will, not financial resources, campaigners say.

“(One and a half) billion people, or 15 percent of the world’s population, are still defecating in the open. Of the MDG targets for 2015, sanitation is the furthest off track… (At) the current rate it will only be reached in 2026,” Saskia Castelein, advocacy and communications officer at the Water Supply and Sanitation Collaborative Council (WSSCC) told IPS.

This Geneva-based organisation, created by a United Nations resolution, was responsible for making sanitation an MDG target at the 2002 Johannesburg Summit on Sustainable Development.

“In the last ten years, sanitation has made a lot of progress in terms of awareness and community approaches,” Castelein continued. An increasing number of “people and organisations are working around the issue and (are using) the MDG framework to lobby governments. Now there is more money, but challenges are still enormous.”

Jack Sim, founder of the World Toilet Organisation and initiator of World Toilet Day, is of the opinion that “What we don’t discuss, we can’t improve.”

Sim has been instrumental in putting the issue of sanitation on the international agenda.

“Over the last 12 years, World Toilet Day has become an amazing movement for everyone to support better toilets and sanitation conditions around the world. It has also become a day of creativity as people all over the globe celebrate it in their own style,” he added.

Much progress has been made in India, China and other parts of East Asia, with China being the most likely to meet the goal on time.

But most of Asia and sub-Saharan Africa are still riddled with problems, with only three countries – Botswana, Cape Verde and Angola – on track.

Various studies have shown that each dollar spent on sanitation brings a return of five dollars, yet the world has been slow to make progress because, according to Castelein, the issue is surrounded by taboos.

She argues that policymakers are reluctant to bring such an “unglamorous topic” into the limelight and governments are hesitant to interfere in this most private aspect of people’s lives.

Meanwhile cultural customs and habits are compounding the problem.

“In some places, it is a social tradition to defecate in the open,” a practice that often leads to the spread of diseases like cholera and typhoid, she said.

Diarrhoeal diseases, a direct consequence of poor sanitation, are the second most common cause of death among young children in developing countries, killing more than HIV/AIDS, malaria and measles combined, and resulting in one death every 20 seconds.

Thus, experts argue, improving sanitation in the developing would also expedite the fourth MDG – improving child health and reducing under-five mortality by two-thirds in the next three years.

Reluctance to embrace modern sanitation can be solved by “a community-driven approach,” Castelein said, with development practitioners going from village to village and “training the trainers” on the importance of proper sanitation.

According to Castelein, there is no need to invest millions of dollars into building water-flush toilets all over the world – all that is needed is a global effort to promote basic hygiene by educating people about simple steps like washing their hands with ash, which is a good disinfectant.

Many people, particularly in the developing world, are unaware that sanitation was proclaimed a basic human right by the U.N. general assembly in 2010. Increased awareness of this right could push people to pressure their governments to provide proper facilities.

Campaigners also point out that proper sanitation facilities are crucial for women and girls during menstruation; according to a study by Plan India, 23 percent of Indian girls drop out of school when they reach puberty. World Toilet Day demands safe and appropriate toilet facilities to keep them in school, thus overlapping with the MDG of eliminating gender disparities in primary and secondary education.